Are you a fan of movie soundtracks? If so, you’ll love André Rieu’s newest album which releases today! From the theme from Godfather to Titanic‘s “My Heart Will Go On”, Rieu brings his own style to some of the best film soundtracks of the last century – and that style is nothing short of epic. But that’s not all that you’ll find on his newest release, you’ll also find beautiful waltzes, contemporary classics and hits from musicals like Phantom of the Opera.

I first became aware of Rieu from my boyfriend’s family. They’re planning a trip to one of his upcoming tour stops, and they’ve raved about his music and sheer scale of his performances – so when the opportunity came across my desk to review this album – I was all about it.

André Rieu is one of the biggest-selling male touring artists of all time and was a Top 10 grossing touring artist for eight years straight consecutively from 2009-2016, alongside such massive acts as Coldplay and Madonna. He has performed for more than fifteen million concertgoers, sold over 40 million albums and DVDs worldwide, garnered 500 Platinum Awards globally (more than any other artist) and amassed over one billion YouTube views. A true global star, he has appeared on such popular U.S. television programs such as Dancing With The Stars, CBS Sunday Morning, The Today Show, and multiple headlining concert specials for PBS.

A born entertainer, the engaging Rieu, like his idol Johann Strauss, thumbs his nose at the conventions of the classical genre and welcomes audiences of all stripes to his musical world. During his concerts, he makes jokes, tells stories, and even indulges in a bit of slapstick comedy in between performing some of the most beautiful waltzes in the world, along with hits from musicals and films, and popular and romantic songs from all decades.

But, back to my thoughts on this release – Since I saw my first film (that I can remember) in the late 80’s, I’ve always been a fan of film and musical scores. It amazed me how much emotion could be conveyed – and how an entire scene could be made timeless just from a song. Rieu’s Shall We Dance does a rather impeccable job at delivering that truly epic feeling with each of the album’s songs – whether from a film or not. My personal favorites? “Time to Say Goodbye” (I was obsessed with Sarah Brightman and Andrea Bocelli’s version of this when I younger – and this version is just a magical and inspired) and “A Time For Us” (This song from Romeo & Juliet was one of the first songs I learned to play on the piano that I fell in love with – and this version does a beautiful job at capturing the beauty and pain of the world’s most famous love story.)

Shall We Dance, which is now available on Decca Gold, also includes a separate, live DVD which captures his visually spectacular, party-like live concert experience. 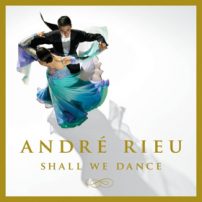 Shall We Dance Track Listing

Second Waltz
The Blue Danube
And The Waltz Goes On
Godfather ( Main Theme)
Strauss & Co Medley
Love In Venice
Radetzky March
A Time For Us ( Romeo & Juliet)
Zorba’s Dance
Edelweiss
Carnival Of Venice
Bolero
My Heart Will Go On
Time To Say Goodbye
Music Of The Night ( From Phantom Of The Opera) (Target Exclusive)
Lara’s Theme ( From Dr. Zhivago) (Target Exclusive)

To pick up the new CD/DVD from Target with the 2 exclusive tracks, go here, and if you the original version, you can go here.

Rieu is celebrating the 30th anniversary of his own Johann Strauss Orchestra this year, the largest private orchestra in the world with 60 members, whose backgrounds represent over ten nations of origin. Based in the Netherlands, his company, “André Rieu Productions,” has 110 full-time employees on the payroll, as well 100 freelancers while touring. He has his own recording studio, travel agency, a Stradivarius from 1732, his own busses (built by Mercedes Benz) and owns a complete atelier in which the costumes for his concerts are made. He owns four complete sets of the stage, instruments, and costumes. The home he shares with his wife in Maastricht is a 27-room, fairy tale castle built in 1452.

Interested in seeing him live? Here’s a taste of what you can expect!

US Tour Dates for André Rieu

Grab your tickets while you still can here!

*Please note: This is a sponsored post in which I was compensated – however all opinions stated here are my honest opinions.