Get ready to geek out, because you don’t have to travel to a galaxy far, far away to experience landscapes truly out of this world. You just have to take a hop, skip and a jump across the pond to Ireland! And that’s exactly what I did on my trip last year, landing in Dublin, we drove up to Belfast (and did a little exploring of Game of Thrones filming locations), then up to Malin Head at the very northern tip of the country, then all the way the down to Portmagee in County Kerry, and then back to Dublin again – it was truly the most geekout worthy trip imaginable. And if you’re looking for such an adventure, I have you covered with my Star Wars filming location guide below! 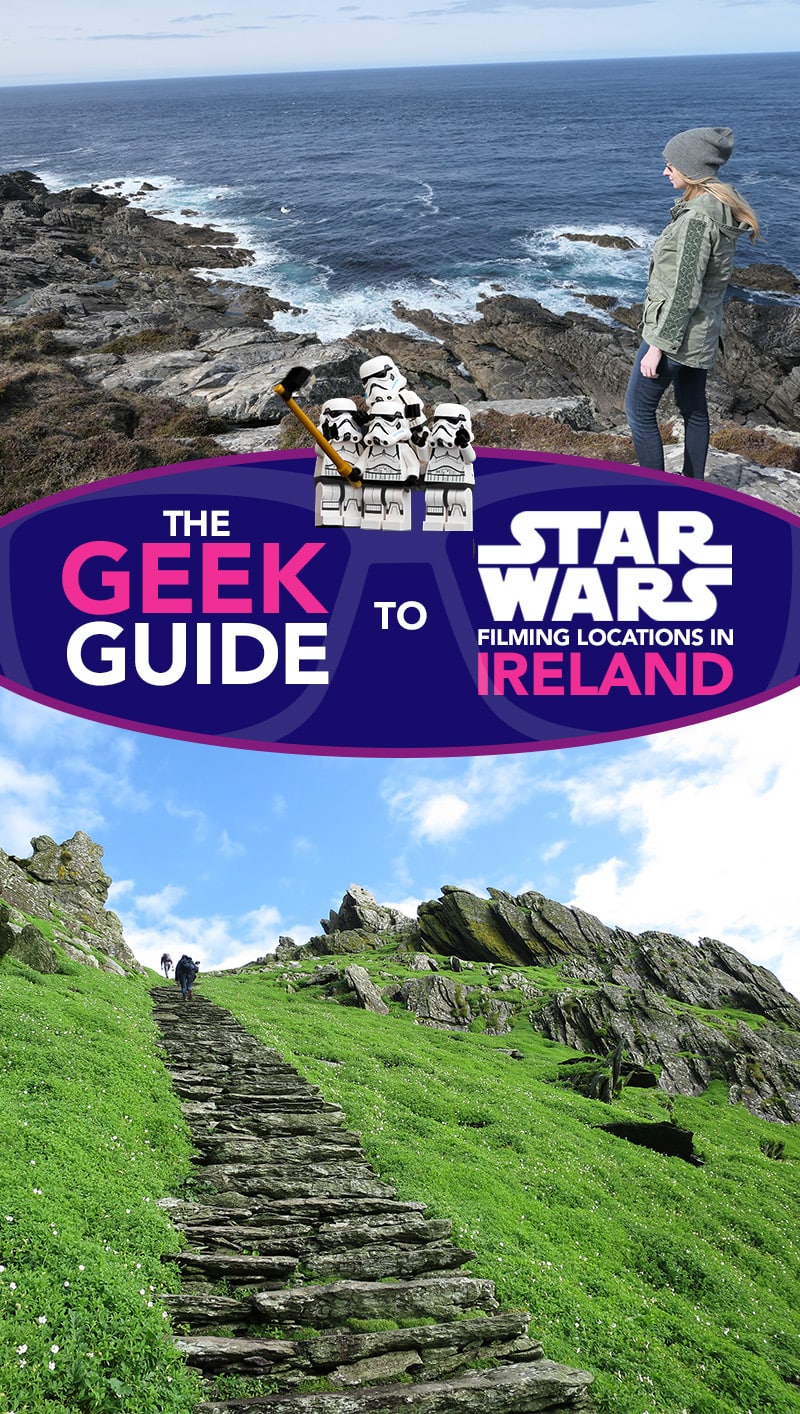 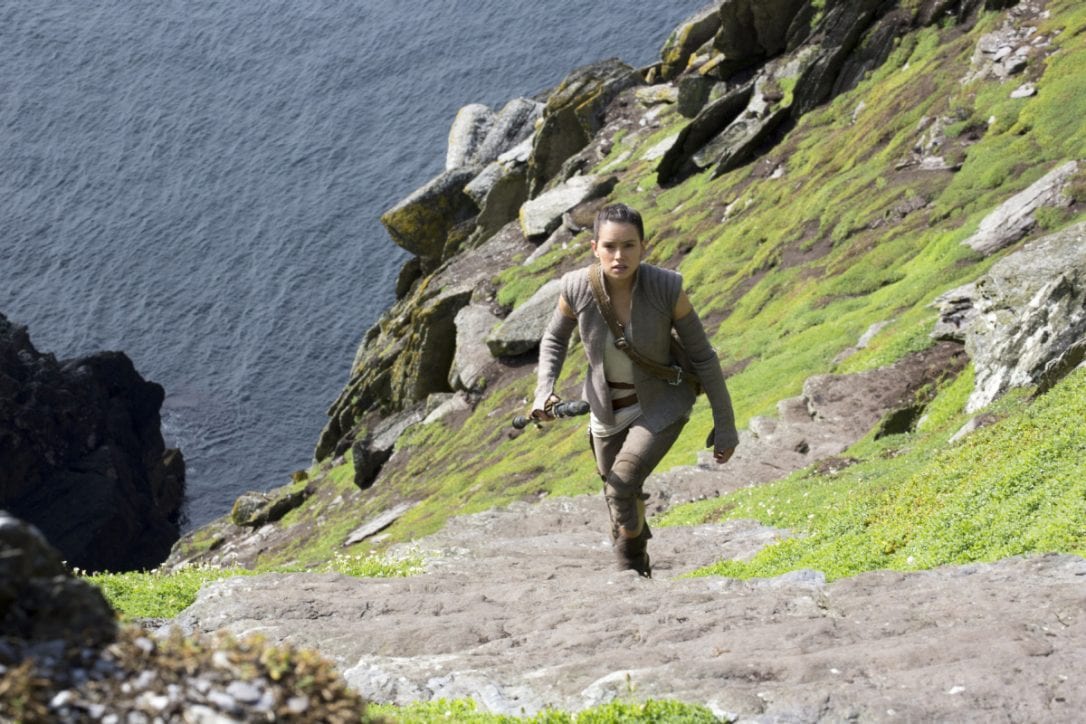 Star Wars: The Force Awakens ended at this location, giving us a brief look into where Luke Skywalker has been calling home. It’s also where Star Wars: The Last Jedi picks up. The island that Luke has been living on is a combination of locations – Skellig Michael in County Kerry as well as Malin Head in Donegal.

Regardless of Star Wars ties, Skellig Michael is a location that you need to visit. It’s a destination that sits on many a bucket lists – my own included. Unfortunately, I visited Ireland in the off season for boats taking tourists out to Skellig. So if you don’t want to get as close with no luck as I did. Here’s what you need to know.

All tours of Skellig are dependent on both the sea conditions and weather conditions. There’s no “best” month to visit in because weather patterns have been so inconsistent. However that being said, your best bet for a tour is from May to late September if you want actually land on the island. Be sure you research your tour options ahead of time before planning your trip. Here’s a couple tour suggestions: SkelligIslands.com and SkelligExperience.com.

The Skellig Rocks, Skellig Michael (also known as Great Skellig) and Little Skellig, are towering sea crags rising from the Atlantic Ocean about 7 miles from the coast. Skellig Michael was the location chosen by a small group of ascetic monks sometime between the sixth and eight centuries. In pursuit of a great connection with God, these monks withdrew from civilization in search of a remote inaccessible place. A monastery was founded on Skellig Michael which gave rise to one of the most epic and dramatic examples of the extremes of Christian monasticism.

The community appeared to have moved to mainland by the thirteenth century, however the island still continued to be viewed as a place of pilgrimage in the following centuries. Awesome history aside, this is a beautiful and remote location, and I can’t imagine how challenging filming was here for the crew.

Where to Stay: The Moorings Portmagee 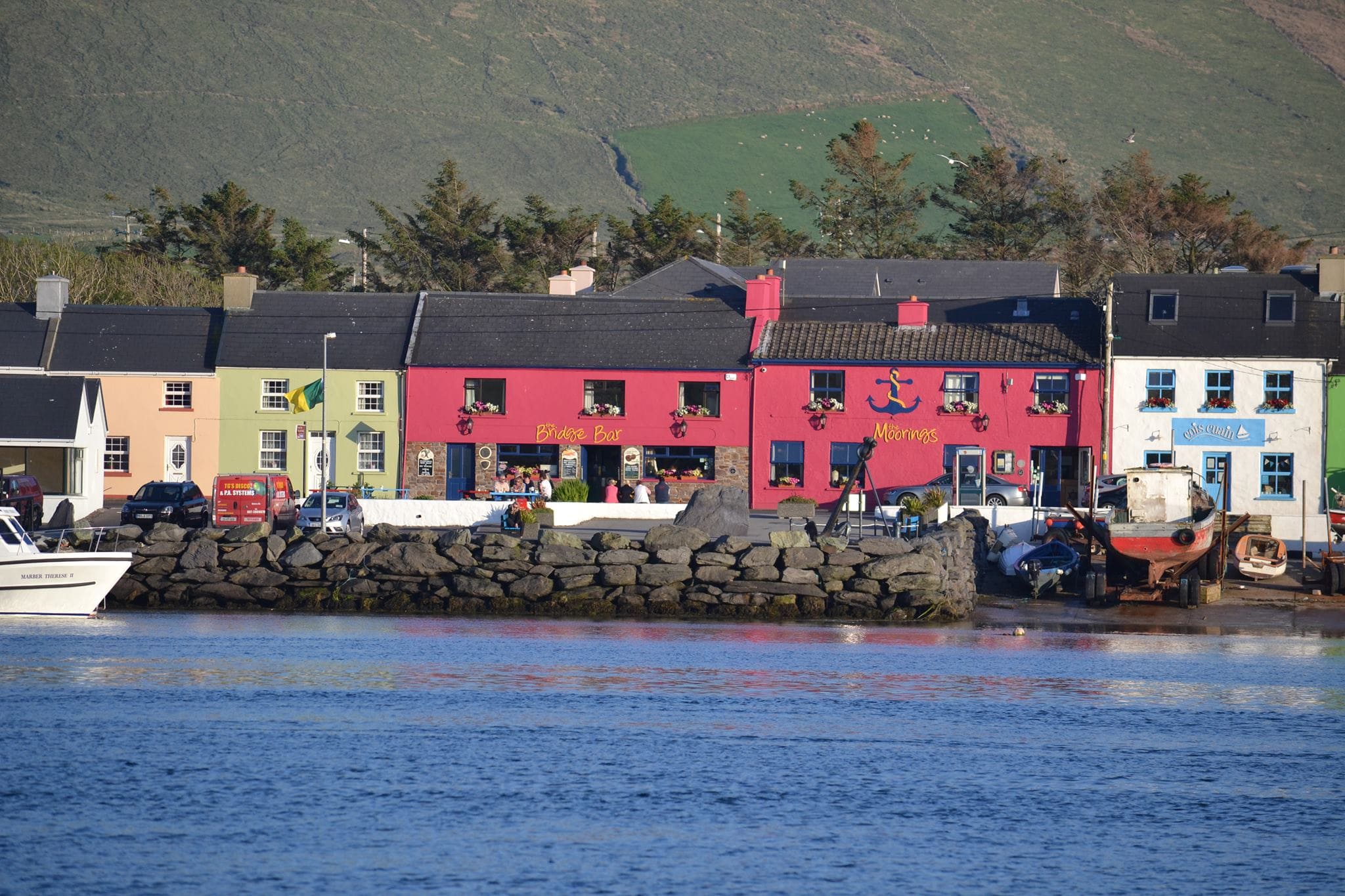 Moorings Portmagee is our recommendation on where to stay on your journey out to Skellig Michael. Sitting along the seafront of Portmagee, the Moorings Guesthouse overlooks the village’s busy working harbor. It’s only a 30 second walk to the pier, where you can catch your boat for Skellig in the mornings!

The Moorings Guesthouse offers 16 rooms in total that provide a calm and cozy atmosphere with a personal touch. And with the restaurant downstairs, it almost feels like you’re staying in a bed and breakfast. And to make it even more appealing for fans, The Moorings Portmagee offers a special Star Wars Package package for your stay!

You can even follow in Mark Hamill’s footsteps and pour your own pint of Guinness where he poured his!

A little further below you’ll see a video from my road trip around Ireland which has some amazing footage from the above hotel!

Also, it’s worth noting what a big fan Portmagee is of Star Wars! The residents decided that they would take on the honorary name of PORGmagee from December 1 through December 15, 2017 in support of the premiere of Star Wars: The Last Jedi! Episode VIII was the debut of the Porgs in the Star Wars universe, and they were actually inspired by the puffins that live on Skellig Michael. (Fun Fact – Porgs actually came about because they couldn’t get the puffins out of the shots that they were filming on Skellig, so they decided they would CGI them into porgs in post-production!)

When filming wrapped at Skellig, the production headed to Northern Ireland to Malin Head in Donegal – Ireland’s most northerly point, on the Inishowen Peninsula. 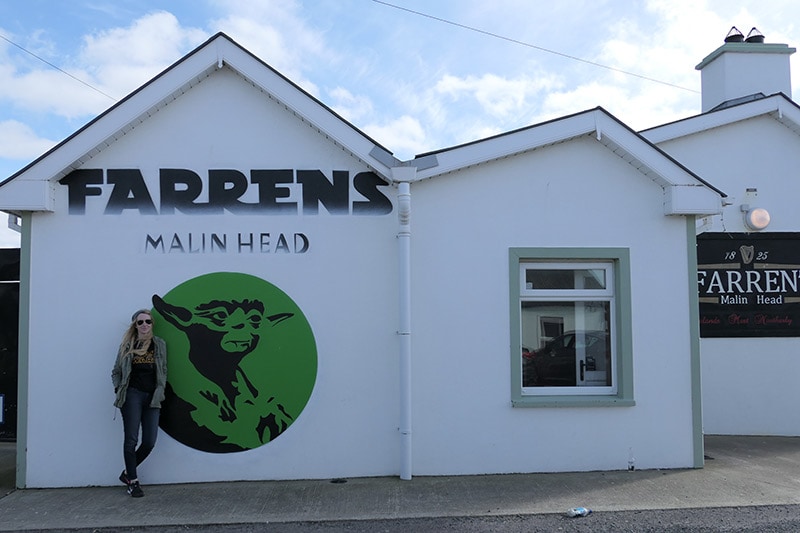 Ireland’s most northerly pub is a must-visit! While it wasn’t used as a filming location – it is decked out in Star Wars fandom – from a Yoda greeting you outside to various photos and memorabilia on the inside. And that’s not all! During downtime from filming, Mark Hamill himself popped into the bar for a pint!

Despite heavy security during filming, fans flocked to the area hoping to catch a glimpse of the next episode in the making, Farren’s Bar was one of the few pubs past the first line of security, and it was often full of fans.

“It was unbelievable that Star Wars was filming a mile and a half away from us.” Hugh Farren, proprietor of Farren’s Bar commented. “The buzz that we had for the month was surreal. It was out of this world. For a few weeks, Malin Head felt like a galaxy far, far away.”

Hugh commenerated the special occasion by painting the mural of Yoda on the outside of his pub – which is now a photo-must for fans!

Can you spot the Millennium Falcon in the above picture?

For those of us that call this world home, the Force = Coffee. Am I right? If you’re looking for a cute little spot to stop in and get some lunch or coffee – while also picking up a few local souvenirs that celebrate filming, check out Northern Bites.

I’m not sure if they’ve changed their policy, but when I visited they did not accept credit cards, so if you’re making a stop be sure you have some cash on hand to purchase goodies and tasty treats!

If you forget to have cash on hand for your Northern Bites stop, McGrory’s Hotel Culdaff has you covered with an ATM machine (I wasn’t leaving Malin Head with out local Star Wars swag)! But that aside, this is my recommendation on where to stay and have dinner while in Malin Head. Situated right on the coastline, this location and views are absolutely stunning.

This is also the location of the Donegal cast and crew wrap party for Star Wars: the Last Jedi! Take a look at Daisy Ridley at the wrap party with the band, Tasty. 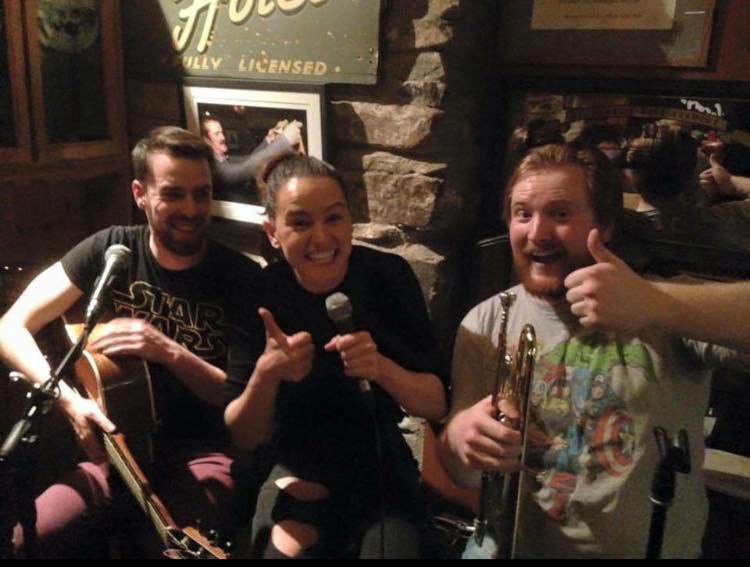 The coast of Malin Head is absolutely stunning and worth hiking even if it wasn’t apart of the Star Wars universe. It’s easy to forget where you are and just get lost in the beauty of nature. I highly recommend taking a walk along the cliffs to Hell’s Hole, a chasm where the tide rushes in with impressive force.

If you’re looking to match locations to scenes from Star Wars: The Last Jedi, look to scenes that took place on the island where Luke has been living. While a number of these scenes were filmed on Skellig Michael, the rest of these exterior shots were filmed in Malin Head. 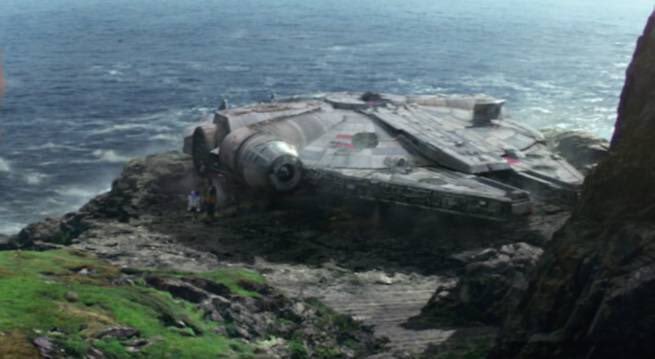 Having visited Ireland earlier in 2017, we did not have a list of exactly what filmed where for Star Wars: The Last Jedi, which honestly made the whole experience like a scavenger hunt as we made bets with each other on what locations would be used in the film. Here’s an even closer look at our experience touring Ireland in search of another Galaxy!

Planning Your Trip to Ireland

Planning a trip to Ireland yet? I truly don’t have the words to describe the beauty that this country bestows. It’s a once in a lifetime experience that you will want to have a thousand times over. I visited so many little villages that I would love to go back and have extended stays in – especially Malin Head. The people are remarkably kind and the food is just as good as you’re imagining. And there’s far more to nerd out on than just Star Wars filming locations – there’s also Game of Thrones, Lost City of Z, Saving Private Ryan, Vikings, Dracula Untold, and so many more!

Looking for even more Star Wars locations? Take a look at our posts from earlier this year,
Star Wars Walking Tours: Feel the Force on Dingle Peninsula in County Kerry, Ireland and Star Wars Travel: A Look at ‘Rogue One’ Filming Locations!

Have you visited Ireland? Are you planning your trip? Let us know your thoughts, suggestions, and/or questions below! And stay tuned for our future Geek Girl Travel adventures!