FanBolt’s Mike Phalin recently sat down with Marshal Hilton to talk about his newest project Primal Rage. Take a look below!

Can you tell us a little bit about your new film ‘Primal Rage?’

Primal Rage is the story of Ashley and her boyfriend Max, lost in the forest trying to get back to the road after a freak accident with their car. Along their journey they stumble upon my character “BD” and his band of merry men in the deep woods. They are a rude and somewhat obnoxious bunch that serves up more frustration to Max and Ashley rather than actual help. Outgunned, and hopelessly lost, they are forced to endure BD in his gang as he leads them back to safety. A local Sheriff and his Deputy come across Max and Ashley’s wrecked car and begin searching to find them as well. And then, well, as you can probably imagine, BD and his crew are least of their worries. Things go from bad to worse, much, much worse.

In the film I play “B.D.”, the leader of a group of cantankerous and somewhat hostile locals that Max and Ashley have the unpleasant pleasure of crossing paths with while they are making their way back to town. He’s a rural, small town guy, a big fish in a little pond. He’s a bit of a blowhard and definitely full of himself. Kind of like a Politician. He’s the mouthpiece of his crew. He wasn’t a “Bad Guy” per say, he just found pleasure playing mind games with people. Patrick and I figured that he was the kind of guy that probably owned the local Hardware Store, the car dealership, the liquor Store, and his band of merry men were most likely guys that worked for him. He’s definitely the Alpha dog in his town. 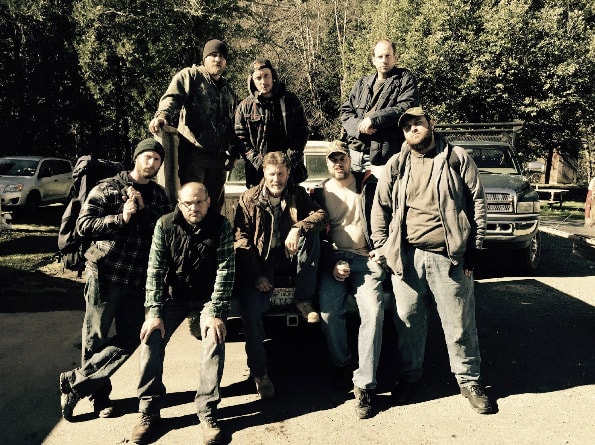 How did you get involved with the project?

I actually read for the role. It was a typical audition situation. I met Patrick Magee the Director, Angela Lee the Producer and Angela’s Bulldog at some place in Hollywood. I got a call that Pat wanted to meet at his Studio the next day. When I walked into to his Studio and saw all his amazing work lining the walls and ceiling, I just looked at him and said, “I’m in”. I hadn’t even read the script. His work was so stunning and so detailed I knew I was going to working with a guy that was not only passionate, but an artist that had supreme skills. He showed me the concept trailer and said we were going to shoot in the Redwoods forests of Northern California and Oregon, and when I saw his Bigfoot creation, it was a no-brainer.

How does this version of Bigfoot differ from those we’ve seen before in film?

To be honest, I have not seen any other Bigfoot movies start to finish. I’ve seen clips, but never a complete film, so I don’t have any comparisons. What I do know for certain is that this version of Bigfoot is a different and unique vision of Bigfoot as a being. Patrick’s version is ancient, almost like a prehistoric “Missing Link” to another life form. He’s intelligent, and cunning, a warrior spirit. He’s definitely not the shy, meek, and mild creature eating flora and fauna. He’s brutal, fierce and ancient. The closest thing I can compare it too as far as a creature archetype would be “Predator”. This film also delves into his mystical relationship with Native American spirit culture. The mythical legend of Bigfoot has been told around campfires since man evolved as storytellers. This is just a new paradigm for which to contemplate the Bigfoot mystique. Most films tend to shy away from showing Bigfoot front and center. But Patrick Magee’s version is breathtaking in the quality of the practical FX and the execution. I guarantee you’ve never seen anything like it.

Did you have a particular scene in the movie you enjoyed filming the most?

There were many. I was blessed to have such wonderful actors to work with. Patrick did an amazing job casting such perfect people to bring this crew of characters to life. Trevor Wright, Brandon Gibson, Blake Johnson, Jim Roof, Scotty Fields, Terry Peay, and Timothy Reed Martin were so much fun to work with. They absolutely killed it. You have to understand, most of these guy are improve comedians. You take ten actors tromping through the woods busting jokes non-stop and it was just hilarious some of the things that happened. It was so enjoyable to be part of this film. But as for your question, I would say the scene were Max and Ashley decide to approach the hunters in the middle of the deep forest and Max asks if anyone “…has a Cell Phone…” was probably my favorite scene to shoot. 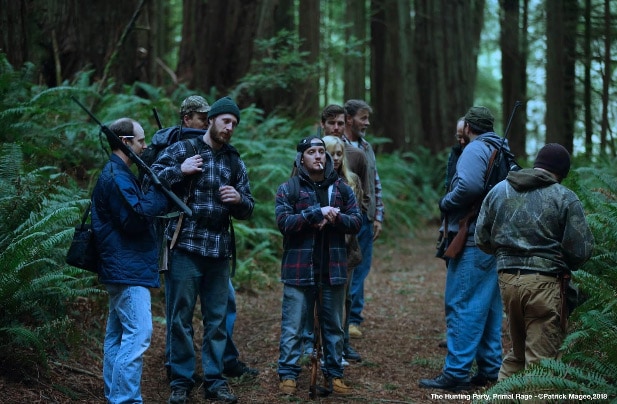 Can you tell us a bit about the stunt work and creature effects we’ll be seeing in ‘Primal Rage?’

The Creator, Director and Co-Writer of Primal Rage is Patrick Magee. Pat is a master creature creator. The list of superlatives for his work in my eyes would be endless. I knew when I saw the Bigfoot creature in his studio that it was special. The level of detail was insane. I think it took him and his team like three years to make it by hand. His Bigfoot creature had actual fingerprints on the fingers and toes. Know one in the audience would ever see that detail but it didn’t matter to Patrick; he knew it was there, and that’s all that mattered. But when I saw the Bigfoot actually sneaking around in the woods on the first day of filming, I knew it was going to be revolutionary with regards to the Bigfoot myth. It was just plain freaky. I mean, we all knew it was Patrick in the suit, but there is such a suspension of reality when a 6’10” snarling beast is coming at you in full stride that its hard to explain.

FUN FACT: The Director Patrick Magee was “the man in the suit”. When if first met Pat at my reading, he was sitting down in a chair and never got up. They set up a meeting for me to go meet with pat at his studio. When I got there he came to the door and I was like “…Holy Shit dude…You’re freakin tall…” He actually custom made the suit to fit him like a glove. He was the perfect person to play the beast. 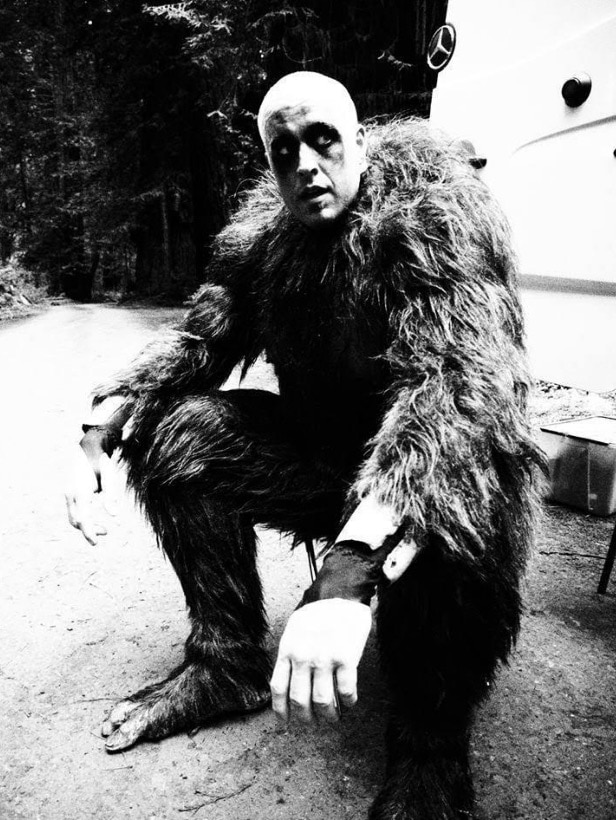 What was the experience like filming a something akin to Predator-with-fur in the woods?

Amazing. Working on this film was one of the best experiences I’ve had working on a film in 20 plus years in this business. I’ve always said that its not the size of the movie, it’s the size of the heart in the movie, and this production had a very large heart. Everyone in the cast and crew was into it 100%. Patrick’s passion, attention to detail, and commitment to his vision was extraordinary, and it plays in every frame of the film. When a Director is that prepared and knows exactly what he wants, it makes the filming process easy and enjoyable.

As for the filming experience, working with Bigfoot was awesome. We filmed the movie in the majestic and breathtaking old growth Redwood forests of Northern California and Oregon, on a 1,200-acre private reserve. We were based in Crescent City California, a sleepy little fishing community about 20 miles from the Oregon border. The shooting location was perfect to tell the story. Without going into too many details, I can say with relative certainty that you will find the realism of the action to be stunning. As an actor, the beauty of working with Practical FX verses CGI FX is the visceral and physical reality that is in front of you, not a green screen behind you. We were actually in the forest. Bigfoot was in front of us. It’s much easier to be in the fantasy of the story when Bigfoot is in front of you rather than an image in your mind, in a studio, in front of a green screen. Patrick is 6’ 10”. In the suit he was almost seven feet of hairy, snarling, angry beast looking to chew your face off. Even though you knew it was all staged, there were some moments that were really intense and hard to get through.

On the lighter side, it was also interesting to have Bigfoot direct you in a scene. I mean, Patrick is standing there in full Bigfoot costume, looking down at you, telling you what he needs you to do in a scene. It was pretty funny.

And finally, the most important question – Are you a believer in the legendary and elusive Bigfoot?

I’m a pragmatist, so anything that I can’t touch, see and smell, generally falls into my field of doubt.

Thank you again for your time, Marshal! We look forward to seeing ‘Primal Rage’ later this month!

Indeed. Primal Rage is going to have a ONE NIGHT ONLY Nation-Wide limited Theatrical Release through Fathom Events on February 27th. The Distributor and Sales Rep for the film, Blue Fox Entertainment, cut deal direct with AMC Theatres, Regal Cinema’s and Cinemark for the event. It should be in around 450ish locations in the US. You can search Fandango.com for “Primal Rage-Bigfoot Reborn” to find a location. The film will then have a European Theatrical release in March I believe, and then a VOD release after that. 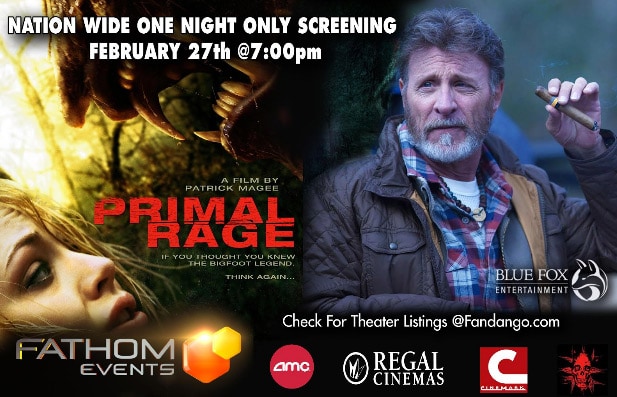 Thanks again for having me! I hope you and your readers enjoy the film. Speaking for the entire cast and crew, we deeply appreciate your support!