Nicholas Tana’s Hell’s Kitty was already shaping up to be a who’s who of horror alums including Doug Jones, Adrienne Barbeau, and Michael Berryman to name a few, but there was a very special guest appearance that hit that very sweet spot. That cameo was of none other than one of the Chiodo brothers’ own deadly intergalactic jokesters, a Killer Klown from Outer Space.

Though the cameo is short, it came with a clown car full of memories and yearnings for a long overdue sequel. Luckily, Charlie Chiodo was gracious enough to spare us a few minutes to answer some questions about this seemingly random encounter with the comical extraterrestrial villain.

After 30 years since Killer Klowns from Outer Space nestled itself into cult status, how did one of the titular creatures end up in Nicholas Tana’s ‘Hell’s Kitty?’

Ran into Nick at COMICON and he told me about the Hell’s Kitty project. He thought it would be funny to do a klown episode. I thought so, too. I found a spare costume and reworked a klown head we had. Nick seemed to have a real appreciation for the original film and for the horror genre in general. It was a blast being on set. He shot it in his apartment with his real cat! I remember sitting in his roommate’s bedroom, which he turned into a behind-the-scenes-wardrobe-room while the shooting was happening in his living room! There was a real independent feel to the production, and a lot of passion for making movies amongst all those involved in the crew.

What was it like to see one of your creations live on film again?

It’s been 30 years now, long overdue. Audiences still have a hearty appetite for Klowns. In 30 years, no one has done what the Chiodo Bros have done with klowns. Noone! I really loved seeing the premiere of Hell’s Kitty, and how Nick built a world around all these iconic characters, too. His Hell’s Kitty story is very original, and the way he pieced it all together in the feature was really something to see. It’s exciting to be a part of a project that has such potential cult classic appeal. It was perfectly suited for a Killer Klown cameo. 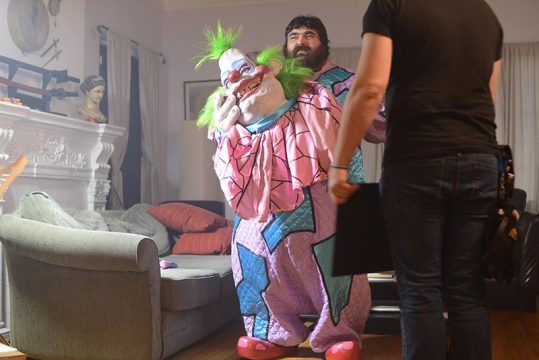 What was the reaction from others on set?

Always the same. Some are creeped out. Some delighted. Everyone is wary of what a Killer Klown will do next. For those who haven’t seen Killer Klowns from Outerspace, it’s often love at first sight or not. There was a ton of laughing on set behind-the-scenes of Hell’s Kitty during the shoot. You can tell the crew was having a blast. We kept trying to come up with fun rainbow colors for the Klown blood after Angel, the cat, attacked it. I think Angel saw the Klown head much like her own personal scratching post. Rumor has it, she was a little high on cat nip, too! Killer cats and Killer Klowns sort of fit together, like hand in a glove, or in this case, like demon cat on killer klown face. 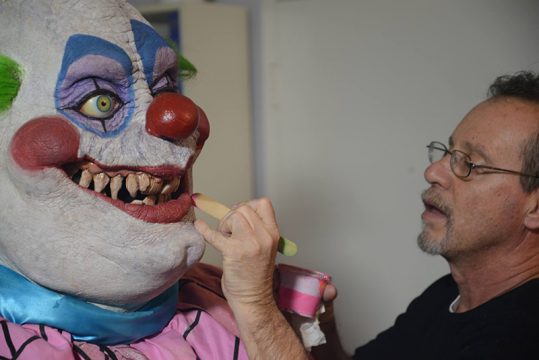 Does this open up opportunities for Killer Klowns to make more guest appearances in other horror flicks?

The ‘Hell’s Kitty’ appearance can only help to remind audiences of the absurd appeal these death dealing mischief makers still possess. The comments so far from fans have been great. And Hell’s Kitty has its own fan following from what I’ve seen so far. It’s cool to be able to expose a cult classic like ‘Killer Klowns from Outer Space’ to a whole new generation of comedy horror fans for what may very well be a new cult classic in the making. Much like there are folks who like clowns, there are those who like Killer Klowns; just as there are people who like cats, and those who like killer cats! I think both concepts share a unique, twisted, comedic appeal, especially for those who are more open minded to seeing something super original.

From the footage we saw over at Dread Central, it’s obvious that Killer Klowns really pop in high-def. Can we expect that same kind of visual brilliance in the upcoming 4k release in March 2018?

I believe the Klown colors will pop like never before!

We recently spoke with John Massari regarding the upcoming ‘Killer Klowns’ concert. What has your involvement been in this exciting event?

We’re thrilled about the upcoming concert. John has not only outdone himself by orchestrating the score, but has gone beyond with his concert venue. The Chiodo Brothers and I are providing art direction, a gallery of klown art, and creative support. 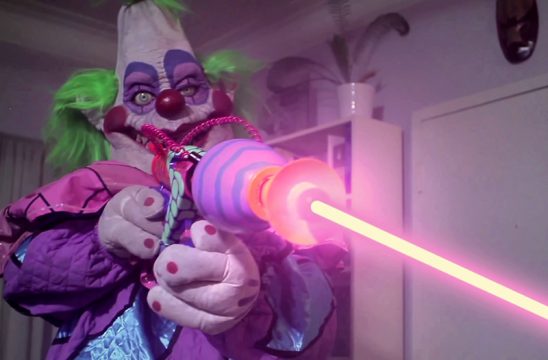 Is it safe to say that the public could expect some more Killer Klown surprises in the coming future?