‘Shadowhunters’ 3.03 Recap and Review: What Lies Beneath 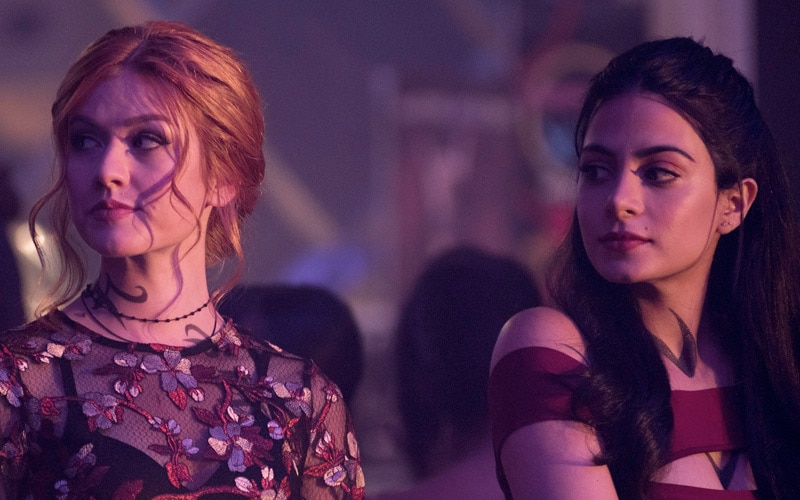 Things have moved to the dark side, including Jace apparently. Plus Alec and Magnus ended up at dinner with Maryse. This could mean trouble.

Demon possessions are running rampant and I am so not a fan. Lilith is definitely the worst big bad I have seen in this show. I know Valentine was bad, but Lilith has taken evil to the next level. It’s one I’m not so sure the gang is going to be able to get rid of Lilith easily.

While I don’t usually enjoy when Maryse comes for a visit, this one seemed slightly tolerable. Of course, it was because she was preparing to lose her runes. Does having this happen force Shadowhunters to have a sort of epiphany? Because it was like a completely new Maryse. One that I actually kind of liked. I know, I can’t believe I’m saying it either. But she hugged Magnus. Was actually nice to him! Talk about a mind bender!

Speaking of Magnus, I just can’t get enough of him and Alec. The two of them are truly pure perfection. Thank you Izzy for providing the idea of a nice dinner with Alec and Magnus. I couldn’t have asked for a better domestic moment than that scene. Plus, that isn’t the only one I got in this episode. So I am definitely a happy viewer!

On a sadder note, I actually felt feelings for Raphael. I have been trying my hardest to avoid shipping Raphael and Izzy. Mostly because I just can’t wait for her to get with Simon. But the amount of emotion these two showed for one another after Raphael’s sister died? I almost had tears in my eyes and was even closer to falling off the edge and shipping these two. How dare you Freeform? At least Raphael got to spend a little time with his sister before she died. Even if she didn’t know who he really was.

I’m going to continue holding out hope for Jace and say that this entire Owl situation is all a lie. I don’t care what kind of consequences there are to coming back from the dead. Jace wouldn’t cross that line and become LIlith’s little minion. He would kill himself first. There is some kind of illusion or trick happening here to make it seem like Jace. My bets are on Jonathan. If it isn’t him directly, he is absolutely involved.

So, the Seelie Queen gives Simon a mark that basically makes him invincible. Then she forbids him from coming back to her court? What gives here, lady? I mean, I know how much you love to play games, but the endgame here couldn’t be more mysterious. If this was a ploy to get Simon to come back to you, you didn’t reap the benefits of the success very well. Get yourself together because you’re making my head spin!

Shine On: Amber Nova Talks the Her Wrestling Goals, Her Style and More!