Considering purchasing a 2019 Toyota RAV4? The car has changed massively since even the 2018 models, and I’ve recently spent some time in both models to be able to attest to what the difference is between them.

Let me start you off with a little background info. I’m not a car journalist, but I’m a technology enthusiast. And it’s no secret that I’m a huge fan of Toyota’s RAV4 model. It was my very first car. When I turned 16 back in 2000, I purchased a 1996 RAV4 with 40,000 miles on it. It was a beautiful relationship I had up until the end of 2017. So many major life moments happened that revolved in or around that car. I had my first kiss in that car, graduated high school, went to college and grad school, started my business, went on countless road trips – and yes – even had a wreck in it (though not my fault). It sounds silly to say that car was a member of the family – but it was for me. I loved that car with all my heart.

At 35, I’ve only ever owned one car, and I’m getting ready to purchase my second car here in a few months. With the considerable advancement that’s happening in tech every year now with new models, I’ve been thoroughly doing my research on different brands – and the models that would all compare to the RAV4.

I haven’t spent any time in a RAV4 more recent than my 1996 RAV4, so my friends at Toyota loaned me a 2018 Toyota RAV4 Adventure – so I could experience the current model – before being introduced to the 2019 model which has undergone an enormous transformation.

For 2018, Toyota added the Adventure grade for the RAV4 crossover. While it’s very similar to the RAV4 XLE model regarding amenities and interior, it adds about a half an inch to the ride height. There are many changes as well to the exterior which gives it a more rugged and robust appearance – there’s also an impressive “Tow Prep Package” which allows for you to tow up to 3,500 lbs.

The emphasis on outdoor adventure is clear – but the fuel efficiency wasn’t great, and I was missing some of the bells and whistles I had experienced on other models recently. After having spent a little time the 2018 Lexus NX F Sport- which I had described as feeling like a luxury RAV4 – I just wanted to see more from the RAV4… That was until my first encounter with the 2019 Toyota RAV4.

If you’re looking for a crossover SUV that steps up the game on fuel efficiency, brings impressive tech upgrades, and starts under 30k – this is the car you need should be considering.

My first impression? It felt like I was the 2018 Lexus NX that I had fallen in love with weeks earlier – but it was a RAV4 that was ready for whatever terrain I wanted to take it to – and a more attractive price. And Toyota was eager to prove that it was more than capable of being up to that task.

My time with the 2019 Toyota RAV4 was spent with the Hybrid model – as that was the model I have interest in potentially purchasing myself. I was quite impressed with how smooth and quiet the ride was.

If you want all the technical specs for the new model, you can check out my post here, as I’ve thoroughly geeked out over them – but if you the want the key highlights without the formal car speak – here’s what you need to know.

The new RAV4 is about the same size as the 2018 model, but now it rides on the Toyota New Global Architecture what the Camry does. Size doesn’t change, but the proportions do – which is a huge reason why the new RAV4 has the look that it does. It doesn’t feel too wide or bulky, and it’s not compact or tight. It’s just a perfect fit with ample room for luggage.

This was the real game-changer for me. While I make a lot of road trips for work, I also do a lot of city driving to and from meetings. I care A LOT about the gas mileage when I’m not on the highway.

You’re looking at 26mpg in the city, 35mpg on the highway, and 30mpg combined with the gas models, and 41mpg city, 37mpg highway, and 39mpg combined for the RAV4 Hybrid – which with a 219 combined net total system horsepower is the fastest RAV4.

The 2019 model offers you improved traction over mud, rocks, and snow. Its ability to handle rugged terrain isn’t just implied with the more robust elements of the Adventure exterior – but it’s the reality. Even the Hybrid XSE HV handled the off-road course beautifully at the model’s media debut last November.

The Premium Audio in the 2019 Toyota RAV4 Is Amazing

It’s no secret that I’m a massive JBL fan, and the audio systems in these RAV4’s couldn’t be more geek-out worthy! JBL Premium Audio enhances every trip – whether a cross-country road trip or just a grocery run. 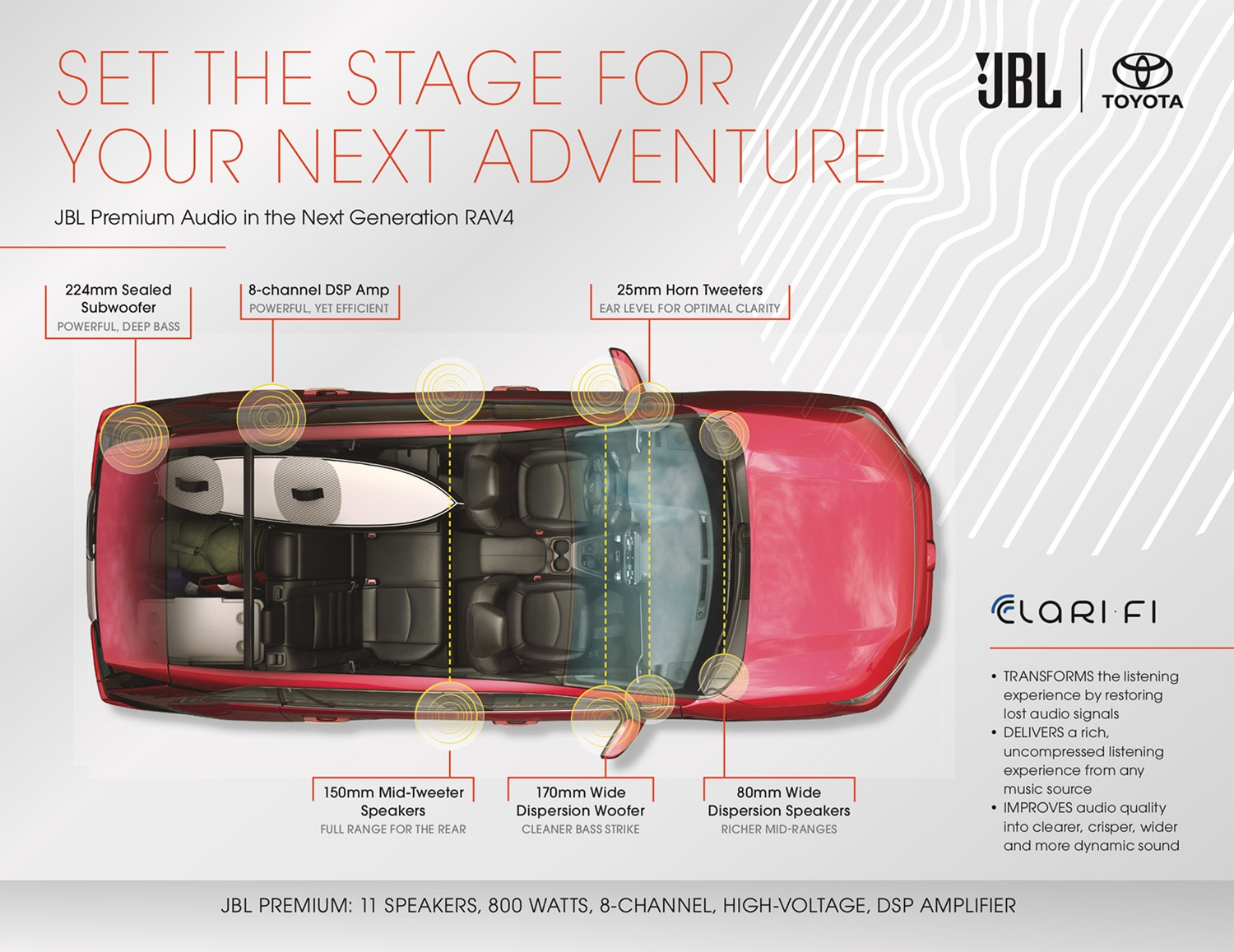 I’m still narrowing down my options for my car purchase here next month – but the 2019 RAV4 is a strong contender as I look at the crossover SUV market. Just wish the 2019 Toyota RAV4 Hybrid was available now instead of March. The gas models, however, are now available at dealerships.