I had high expectations going into last night’s media screening of Rocketman. I love Elton John and hearing how involved he was in every aspect of this movie lead me to believe it was going to be precisely what I hoped for. So was it? I spent the 2-hour and 2-minute runtime loving every second of it – though I felt like I could use a glass of wine when the movie finally concluded. Saying that the audience goes on an emotional journey is a bit of an understatement. I struggle to think of another film that evokes as much love, understanding, pain, and acceptance for its main character as Rocketman does. It’s not an understatement to say this is the best film to date for 2019.

For those not familiar with the story that Rocketman tells, it’s a biographical musical based on the life of Elton John. See the trailer below.

I went into this not knowing a lot about Elton John’s personal life. I was unaware of the emotional abuse from his family as well as his drinking and drug-use struggles. He’s been sober for 28 of the 35 years I’ve been alive. So really the only thing I knew about him was that he is one of the greatest musicians of all time. And that he was responsible for so many songs I hold near and dear to my heart. After seeing this film though, not only did I just want to give Elton John a hug (as I’m sure will be everyone’s reaction), but I had an even greater appreciation for his talent and him as a person – having to work through and ultimately transcend so much unbearable pain.

Rocketman Review: What I Loved and Didn’t Love

It’s hard for me to list anything I don’t like about this film. But several visual effects were used throughout that felt cheap. And they actually removed me from the feeling I had of being completely engrossed in this film. For instance, there’s a scene in which Egerton sits at the piano, and it begins to spin. And we see that the director is trying to convey a passage of time and travel as Elton’s success grows. However, the result of this wreaks of CGI and pulls you away from the richness of the story.

As far as what I loved or didn’t love? Rocketman is full of so much heart, and Taron Egerton couldn’t have been more perfectly cast. If he doesn’t get an Oscar nomination for his work here, you’re going to find a lot of angry fans. Myself included. But what I loved most of all was the emotional journey that I’ve already referenced and the 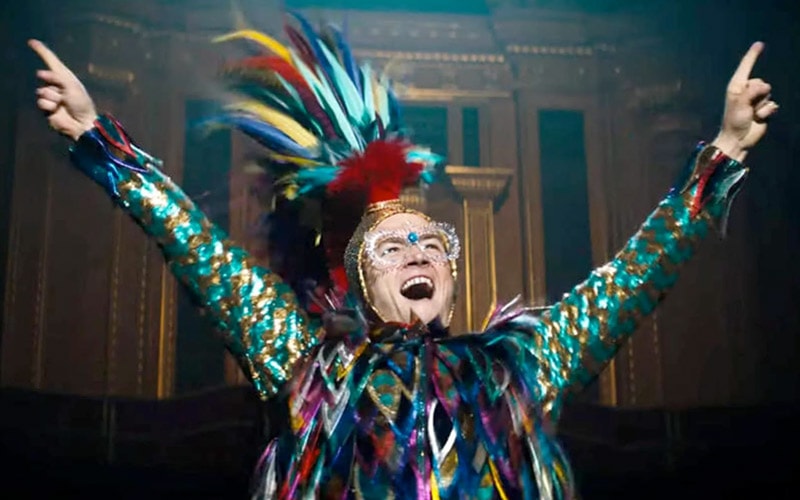 I struggle with the timing of this film’s release (May 31, 2019). The story is beautiful – the acting superb – the mass appeal is clear. So why not release this during Oscar season? This movie far surpasses Bohemian Rhapsody in every single way you could critique it. Don’t get me wrong; Rami Malek did an incredible job in that film. But there was no full journey that you went on with Freddie Mercury in that movie. Despite telling the story of Mercury, the film never created an emotional bond that the audience could feel with the lead character. Not to mention, there was never a climax to the actual story arch.

Rocketman truly takes you on a journey that cuts deep into your emotions. You feel what Elton John is feeling at the most beautiful, painful, and lonely moments of his life. The combination of Taron Egerton’s brilliance at capturing Elton combined with the visual representation of his thoughts and emotions transports you inside the mind of Elton. You’re not watching a movie through your own eyes – you’re experiencing a legend’s life while sitting behind his own eyes. The combination of the direction, cinematography, visual effects, script, and unworldly good acting creates something with this film that I’ve rarely experienced as a movie fan.

Bottom line, see this film. It’s one of the best movies that 2019 will have to offer.