Home » Movies » ‘Men In Black’ and Lexus: The Story Behind the Partnership

Product placement in film and television is nothing new, but when it comes to the automotive industry, the products can almost become characters themselves when they appear on the big screen. It’s becoming increasingly common to see these type of partnerships take form, and it’s a great way to introduce a car to an audience of highly engaged fans. It’s not a commercial they’ll be skipping over when it’s the vehicle they’re rooting for their favorite character to escape in.

From Black Panther to Superfly to the newly released Men In Black: International, Lexus has partnered with some of Hollywood’s biggest releases, and we couldn’t help but wonder – how it all comes together? What makes a good partnership between a car brand and film? And how involved is the car brand in how their vehicle is portrayed?

We were able to sit down with Lexus Marketing Media Manager, MJ Kroll, to ask a few of these questions and learn more about the collaboration between Hollywood and Lexus.

When a movie needs a car for filming, do they reach out to Lexus? Or does Lexus reach out to studios (looking for partnerships and product placement on their new vehicles)?

Often, we will receive a call from the producers or transportation departments based on their needs for a particular production. Other times we might have an opportunity to submit a bid to place a product based on a film’s particular needs.

What does that conversation look like? Do films already a model in mind, or is that something that Lexus gets to pick?

First and foremost, we look for alignment with our brand and how the integration might enable us to illuminate a core brand truth within the story.  We also consider timing and the needs that filmmakers are looking to Lexus to help fulfill.  We review the integration scenes and ideally read the full script to understand the nuances of the story and the characters.  We consider how our product aligns with the character who drives it. For high profile integrations, we ensure that the film’s release syncs with our key initiatives and priorities during that time period. For Men in Black: International specifically, they were looking for a high style performance car, and we were preparing to launch the new RC F, the purest expression of Lexus performance. They were also looking for SUVs to round out the MIB fleet. In addition to the Lexus RC F sport coupe, the Lexus RX Hybrid and Lexus LX SUVs are also featured.

Q: Films like Men in Black have cars that have a lot of special gadgets in them, how does Lexus ensure that they showcase the car in a way that benefits Lexus?

A: It typically depends on the new or standout features of the vehicle we are showcasing in a given film. For the new RC F in Men in Black: International, it’s all about showcasing the thrilling performance of its naturally aspirated 5.0-liter V8 engine, along with, of course, the exciting ability to transform into a jet that flies at the speed of light, as well.

Q: Does Lexus have veto power over how a car is used or what it does/what happens to it in a film?

A: The beauty of film integrations is that none of the traditional rules apply. It’s an opportunity to partner with filmmakers to imagine all the possibilities. If there’s a line, it would probably be drawn at ensuring that any depiction is consistent with our brand philosophy of creating amazing experiences for our customers.

Q: What films or television series have been the best partnerships for Lexus?

A: There are a few memorable film partnerships that stand out. Lexus has always been committed to celebrating the rich diversity of our customers, but Black Panther catapulted it to a new level. In addition to creating a lot of buzz and interest in our flagship vehicles, LC 500 coupe and LS 500 sedan, the collaboration with Marvel Studios on the blockbuster film reinforced the Lexus key brand attributes of exhilarating performance, technological innovation, and style. Steven Spielberg’s 2002 Minority Report was one of our earliest film collaborations; it paved the way for the ones to come. Lexus was cast as the vehicle of the future in the summer blockbuster. The Lexus 2054 concept car designed by Harald Belker was driven by Tom Cruise in several exciting action scenes. We still get asked about it today. 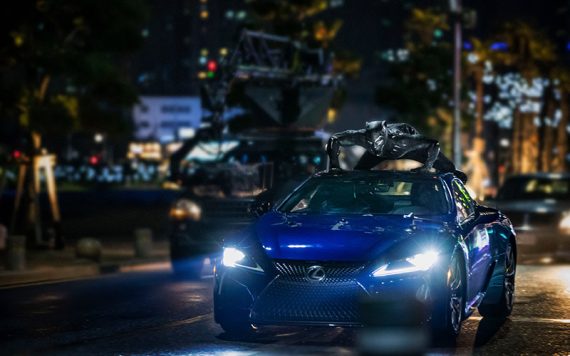 Do you have a car you fell in love with from your favorite film? Let us know your thoughts in the comment section below! We’d love to geek out with you over a few of our favorites!

'Men In Black' and Lexus: The Story Behind the Partnership