It’s Shark Week! And it’s the best time of the year to learn about and celebrate all the species of sharks from around the world. Yours truly did that in her own backyard – at the Georgia Aquarium! And I kind of nerded out… and I’m so excited to be able to share this experience with you!

But for this post, we’re keeping it all whale shark focused, and because I got to be a part of the feeding of one super adorable Yushan. Yushan is one of 4 whale sharks that call the Georgia Aquarium home, and outside of Asia, it’s the only place that you see these beautiful creatures up close and personal. Alice and Trixie (both female) and Taroko and Yushan (both male) were imported from Taiwan. These creatures would have died being sourced locally for food had the Georgia Aquarium not stepped in and rescued them.

On Tuesday of this week, the Georgia Aquarium invited me out to take part in the afternoon feeding of the whale sharks. Witnessing this in-person and in the water is an experience I can’t quite adequately describe other than to say that I was utterly enthralled and one step away from tears (super happy tears)!

Each of these four majestic creatures is fed three times a day. Their food includes a mix of krill, silversides, squid, and green gel blocks (full of vitamins and nutrients). Whale sharks are filter feeders, which means that they eat my straining matter and food particles from the water.

Yushan is the smallest of the whale sharks, and he eats about 40 pounds a day, whereas Trixie is the largest, and she eats roughly 75 pounds a day. While that may seem like a lot, you have to keep in mind the sheer size of these guys – these four sharks range from 18 to 22 feet!

What’s truly fascinating about the feeding habits of these four sharks is that they each have their own lane in which they’re feed in. And they stay in that lane during feeding. This training started was started by the Georgia Aquarium while the sharks were still in Taiwan. And then additional training took place at the Aquarium once they arrived here in Atlanta. It’s fascinating to see, and it’s just wowing how smart these creatures are.

Want to sit where I sat for the feeding? Check out the video below and click and drag around your cursor inside the video!

It was such a peaceful and calm experience as we went along the rope feeding Yushan. I even caught his eye a handful of times checking me out in the dinghy as I took photos and video of him.

At one point during the feeding, Yushan actually came up right underneath us, and I could feel him underneath the dinghy we were in. I’m telling this story as I briefly rode the back of a whale shark, and it was awesome! 🙂

This incredible exhibit that the whale sharks call home is one of the world’s largest single aquatic exhibits. It contains over 6.3 million gallons of water and contains over 50 different species, including this adorable guy.

These manta rays are quite large too and tend to do somersaults while feeding. There are several different species of rays in the exhibit, and I found myself spending a fair amount of time photographing them as well. They have such a personality and almost seem to smile at you.

But back to the sharks! Because, SHARK WEEK!

The Georgia Aquarium has two different experiences available for those that want to explore this exhibit a bit more – You can actually swim with or do a dive with these gentle giants!

The Largest Fish in the Sea

The whale shark is the largest fish in the world, and the largest fish known to have lived on the planet. Just how big can a whale shark get? The largest one accurately measured came in at 61.7 feet! And despite their rather large size, these sharks eat some of the tiniest creatures in the ocean – zooplankton. And while whale sharks do have teeth (about 300 rows of small teeth along the inner surface of each jaw), their teeth are tiny and pointed backward – not serving much function for feeding.

Additional fun facts that I learned during my surreal experience:

While the details on the newest edition to the Georgia Aquarium are still mostly under wraps, here’s what I can tell you about what’s coming in Fall 2020!

The Georgia Aquarium will be opening a new gallery focused on sharks. It’s an extension of the Aquarium’s conservation and education efforts, and they hope it will provide an exceptional understanding of the role that sharks serve in the ocean. Expansion 2020 will be the perfect way to inspire shark conservation while enhancing the guest experience.

We don’t know what species will be included in the new gallery – but we know that hammerheads, sand tiger sharks, and sandbar sharks are all be considered.

So what could this new gallery look like? The gallery rendering gives me chills…

I have a feeling you’re going to have to drag me out of this exhibit. If it looks anything like these, it’s going to feel immersive – and it gives us a chance to see the creatures like we never have before.

We all find sharks fascinating, but the Georgia Aquarium wants to make sure it’s not out of fear. The exhibit will be designed with tons of educational material to inspire respect rather than fear.

And there are a few animal interactions in the works to give guests the opportunity to get closer to the sharks. Once that information is finalized – we’ll let you know!

And as soon as more details surface (pun intended) about this new addition, I’ll be sure to let you guys know, so stay tuned.

On a side note, if you’re a geek like me – and you’re visiting the Georgia Aquarium, save up your money for some of the punniest shirts you can imagine. I can’t tell you how much these shirts made me smile. 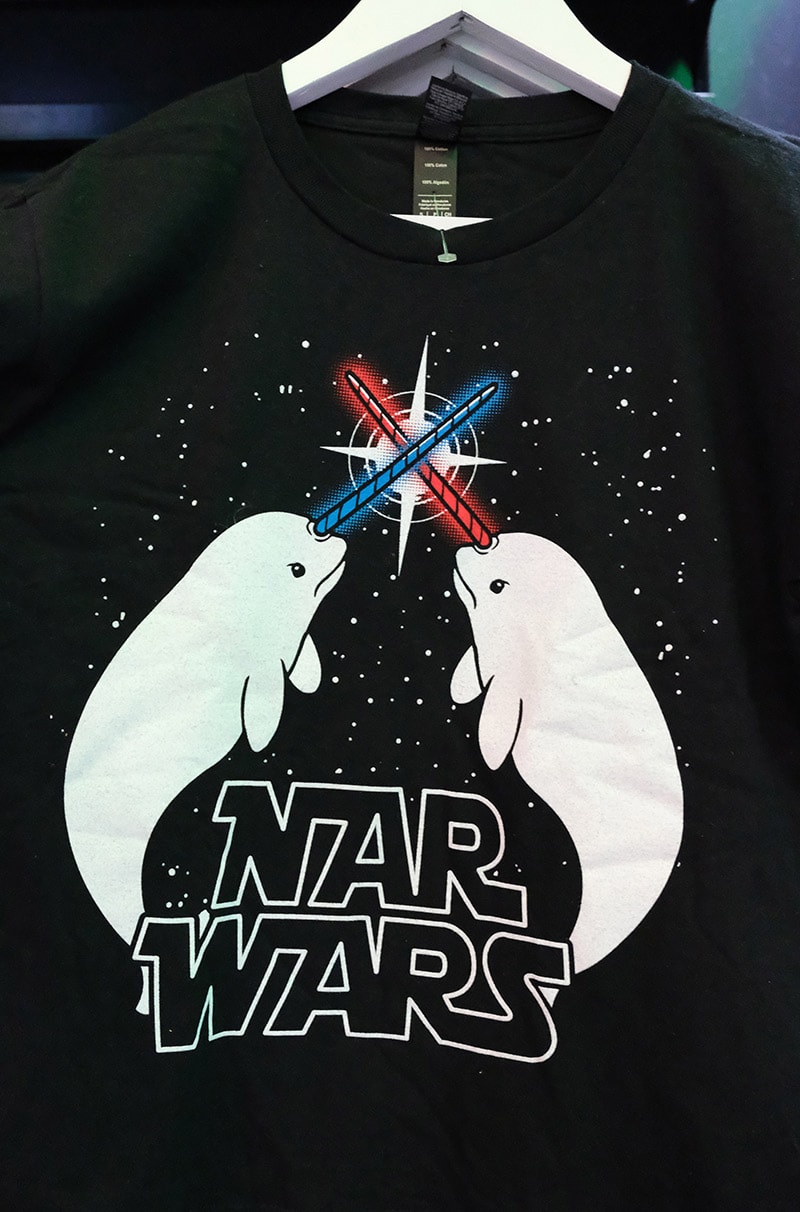 I actually bought that manta ray shirt. It was too cute and retro. I had to own it. And had they had the Join The Shark Side in adult sizes – I would have bought that too, because…

That’s the best advice I can leave you with! I hope that my geeky outing to celebrate Shark Week with the Georgia Aquarium inspired you to visit your local aquarium and celebrate Shark Week up close and personal with some of this planet’s most fascinating and misunderstood creatures. And of course, don’t forget to check out Shark Week on Discovery Channel for more shark goodness! It’s airing now through Sunday, August 4!

Are you a fan of sharks? Have you swam with them or done a cage dive? Do you want to celebrate shark week at the Georgia Aquarium? If so, I’d love to hear from you in the comment section below!

Note: The Georgia Aquarium sponsored this post, but all opinions are my own (as I am a MASSIVE shark geek).