Dragon Con 2019 is officially underway in Atlanta, Georgia! The internationally known pop culture, science fiction, fantasy, and gaming convention, is back and bigger than ever this year, with a record number of fans headed to downtown Atlanta for the Labor Day weekend.

In celebration of this year’s convention, we sat down with one of our favorite Dragon Con staff members – Director of Media Engagement, Dan Carroll. See what he had to say about his involvement in the convention, what he loves most, and what he’s most looking forward to this year! 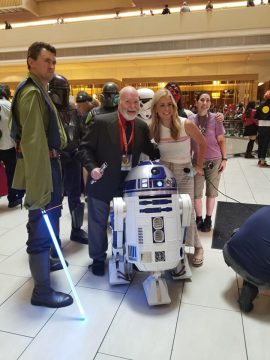 How did you first become involved with Dragon Con?

My first Dragon Con was 2006. I had heard about the event before, but I decided I would go. Since none of my friends wanted to go with me I volunteered the first year to work the help desk. My first day I helped David Prowse (Darth Vader) find Peter Mayhew (Chewbacca). Then an hour later I helped Peter Jurasik from Babylon 5 find Mira Furlan, also from Babylon 5. That was all it took for me to be hooked

Obviously it’s grown a lot since you first became involved, what’s been the coolest part of the evaluation that you’ve seen?

Well, I think it’s very obvious Dragon Con is no longer at the event that happens over to the side in Atlanta. Now Dragon Con has been embraced fully by the city, fully by the Atlanta Convention & Visitors Bureau. It’s gone from 28,000 people in 2008 to last year’s record 83000 attendees. It’s grown from 3 hotels to 5 hotels, plus additional space in AmericasMart. But, but despite the growth, the real change has been the way the city feels about the convention. This is obvious by the Dragon Con Banners float above the streets in downtown Atlanta already.

Year after year, what do you get most excited for at Dragon Con?

Well even though I’m considered Dragon Con leadership, as the spokesperson, I am absolutely still a Dragon Con fan! The thing that matters most to me year after year it’s a fact that I’m going to see my family. I’m lucky that many of the attendees that I’ve become close to (and Dragon Con reporters), live in Atlanta and I can see them through the year. There are still so many I only get to see at the convention coming in from California form Arizona from Minneapolis. Dragon Con is the largest and still the fastest growing family in the state of Georgia

I know this will be borderline impossible to pick (so you can list multiple if you want), but what is your most favorite memory from Dragon Con over the years?

My favorite moment is a very personal one. 4 years Richard hatch the Battlestar Galactica actor would come to a party I held at Dragon Con. At this party, I give a little speech one maybe three minutes long. at the end of one of these speeches, I thank everybody who came to the party and Richard by name, and then Richard did something completely unexpected. Richard asked the crowd to give me a round of applause. This is a man who I had known from watching TV since I was 14 years old, a man who had proved his acting skills on the new Battlestar Galactica. Richard was someone I respected and liked. He was encouraging people to applaud for me and saying things that still embarrasses me. It was very humbling.

What guests are you most excited for this year?

Of course, Bill Shatner and George Takei are high on the list. I had the opportunity to talk to George Takei years ago before I was a director. I just found him to be a charming and wonderful guy to talk to you. I’m also a huge fan of the expanse so getting to see the actors from the expanse at Dragon Con this year is going to be great. And iZombie actors! Love everybody from iZombie. Speaking of iZombie Aly Michalka will be coming to Dragon Con with her sister AJ Michalka, who stars in Schooled, and they will be performing for the first time ever at a convention as their sister act Aly & AJ

And I would be remiss if I didn’t mention how excited I am to see Roy Thomas this year. Roy with the chosen successor as editor-in-chief for marvel comics and I grew up reading and loving his work

Anything new this year with Dragon Con that you want to highlight to attendees? How many attendees are you expecting?

I guess that every year we look at what is new, but I think the real story about Dragon Con’s real strength isn’t necessarily what’s changing but how they build on what already works so so well. That being said we are excited about the new ticketing system for membership and our footprint expanding into 200 Peachtree.

A lot of people have started complaining about San Diego Comic-Con in recent years (I’m one of them), can you talk about how Dragon Con differs from Comic-Con – and why fans that are maybe burnt out on Comic-Con (or the more commercial conventions) should check out Dragon Con? What makes Dragon Con so special to attendees?

Every convention is amazing in its own way. I have nothing bad to say about San Diego and I’m always impressed with what they do. But Dragon Con is Dragon Con and we exist for fans and we are put on by the fans. Dragon Con focus is the participatory experience. 5 days 24 hours a day! We’ve gone through great lengths to keep it in hotels so that we never lose that basic Dragon Con feel. Dragon Con will always be about the fan interacting with each other, running panels, and being the real stars of the show. Even when it comes to our guests, their focus is always the fans. You may know that our media relations department values fan interaction over media exposure. That’s the Dragon Con-way: the best interaction for our attendees.

Are you attending Dragon Con 2019! If so sound off in our comment section below! We’d love to hear from you!