Back in 1973, following the success of the on-location filming at the Chattooga River in Rabun County and Tallulah Gorge by the dramatic thriller Deliverance, then Governor Jimmy Carter implemented a state film commission. This office is now known as the Georgia Film, Music and Digital Entertainment Office (GFMDE) of the Georgia Department of Economic Development (GDEcD). Wow, try saying that three times fast! These are the folks who bring the filming to Georgia… thanks guys!

From 1972 and Deliverance to 2008 when additional tax incentives were implemented to encourage even more filming, numerous productions shot in Georgia, such as Driving Miss Daisy, Smokey and the Bandit, Sharky’s Machine, In the Heat of the Night, Fried Green Tomatoes, and My Cousin Vinny. During that time approximately 425 productions shot, but since then there have been more than 1,300 productions, all because Jimmy Carter saw that we could be a place where movie magic happened. Now we have more filming that we can keep up with and typically more than 40 active productions filming around the state. 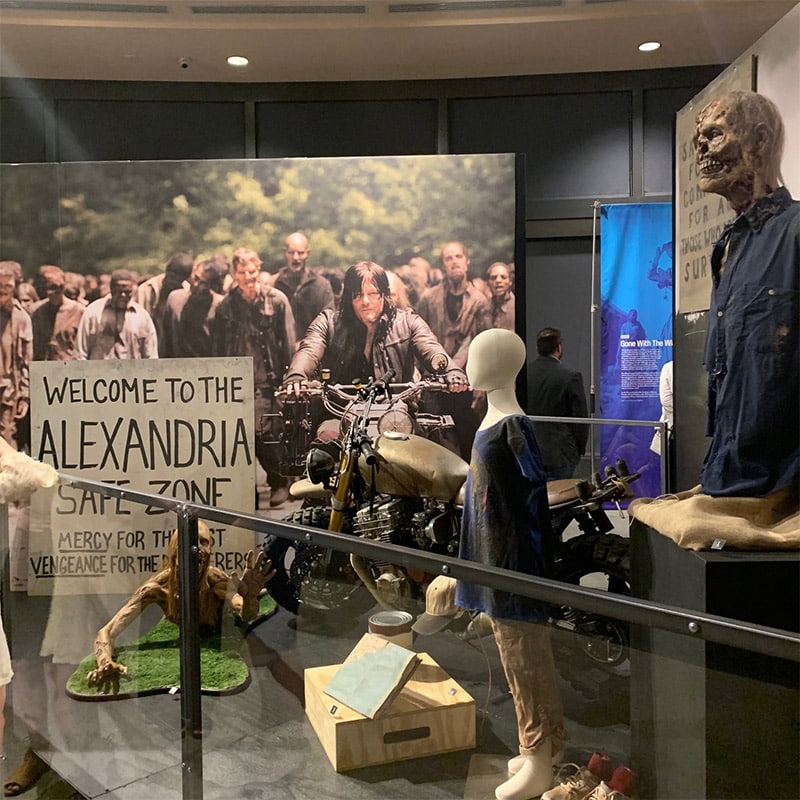 This Summer and through the end of 2019 Georgia on My Screen: Jimmy Carter and the Rise of the Film Industry exhibit is available to the public and is an amazing opportunity to learn about the film boom in Georgia. The GFMDE, along with major production studios, various film offices and museums worked together to compile props from over 60 productions spanning the 46-year life of #GeorgiaFilm. Eulyn Colette Hufkie’s costumes from The Resident on FOX are displayed, the Best Picture Oscar for Driving Miss Daisy, along with many props from The Walking Dead and Stranger Things. We don’t want to give too much away, you just need to go see it! 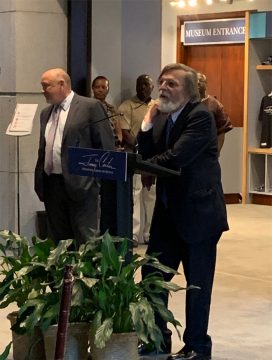 During the opening reception, Norman Bielowicz, head of the film commission through the eighties, talked about what it was like filming on-location in Georgia at that time, a time when multi-soundstage studios didn’t exist, including taking street signs cause “they needed them”.

Executive Producer of The Walking Dead, Tom Luse recalled what it was like filming in Downtown Atlanta for Season 1 with what appeared to be a glimmer in his eye… “only in Atlanta” he was heard saying.

This is one exhibit we hope will stick around beyond 2019 since it’s an ever-expanding and interchangeable exhibit with all the #GeorgiaFilm has to offer! Not to mention more information and hours can be found on their website and make sure to follow the #JCLAM production signs when parking.

They also have continuous events throughout the run of the exhibit, one of those was covered by Atlanta Movie Tours Insider Sydney Madison! 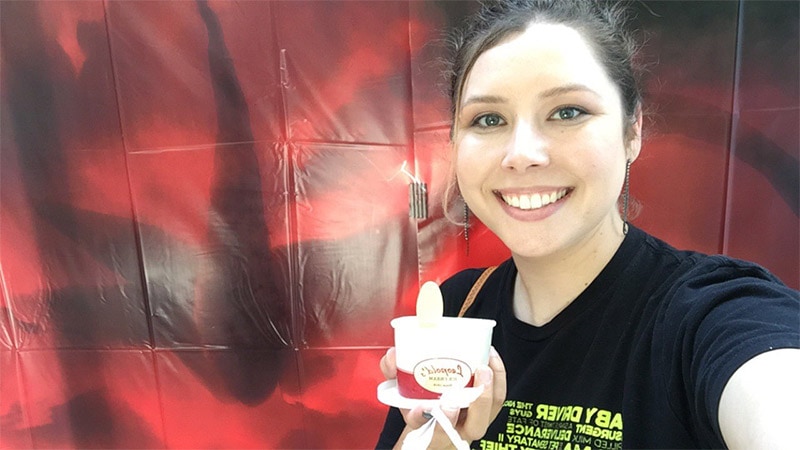 Stranger Things has earned its crown in pop culture with mind-blowing special effects, a killer storyline (pun intended), brilliant actors (of all ages), and gripping dialogue, so it’s no wonder that multiple events are being dedicated to this 80s-set phenomenon. The Jimmy Carter Museum jumped on the bandwagon held and hosted Strange Saturday, an event that turned its lobby into an arcade, held Dungeons and Dragons Demos and invited fans to enter a costume contest.

Take a look at Sydney Madison’s play-by-play experience at Strange Saturday below!

Finally! The Georgia On My Screen Exhibit! 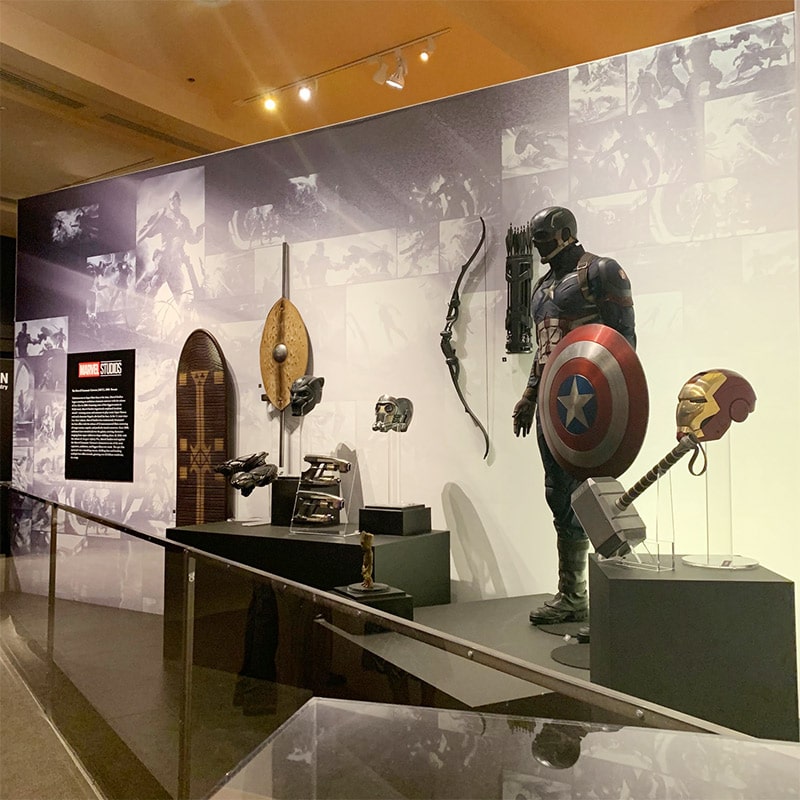 First is a bit of information regarding former President Carter’s formation of the State Motion Picture and Television Advisory Commission and meetings with studio heads to encourage (and secure) filming in Georgia. Also pictured, a meeting with Burt Reynolds, a key ingredient in the success of Georgia as a stomping ground for production.

Okay, let’s talk about the exhibit.

It starts with props from Driving Miss Daisy, including the OSCAR!

I can feel it calling out to me! Don’t worry, I’ll thank you all in my acceptance speech.

Okay, moving on and OH MY GOD IT’S MARVEL!!!

I’m not going to lie to you here, but I made a bee-line to the Captain America suit because, well, Chris Evans. Need I say more?

To be honest, I can’t handle all of this testosterone. The only thing that would have made this exhibit better is if Chris Evans would have actually been in the suit. (Call me, Chris!)

Is now a good time to talk about why Iron Man doesn’t get a hyphen while literally, every other man (Ant-Man, Spider-Man) does? Still no? Okay.

Okay, okay I really have to speed up so bye-bye, Marvel!

I strolled through the clothing portion that boasts outfits from major characters such as Melissa McCarthy’s Diana (Identity Thief), Anna Kendrick’s Beca (Pitch Perfect 3), and goes all the way back to Geoffrey Thorne’s Officer Wilson Sweet (In the Heat of the Night, the series). The collection holds too many to name, but it even includes Channing Tatum’s shoes from Magic Mike XXL, and they are big shoes to fill, indeed…If you know what I mean.

If I’m being completely honest with you here, I got lost in the museum. Like literally. But don’t worry! I found my way out, mild panic attack avoided.

I’m back out in the lobby and the crowd size hasn’t changed but still no sign of the Upside Down Podcast girls (I will find you next time!). I decided to work my way through a few of the games to see what this #arcadelife is all about.

First up, Galaga. I just saw this in a Stranger Things clip (shameless plug for our Atlanta Upside Down tour, come see ya girl!) as well as DigDug, so I’m particularly excited to play these two.

Okay, so I would get behind the one person who seems to actually be good at Galaga.

Finally! My turn! Am I missing something or is this really easy? Wait-new level, it’s not easy! Abort! Abort!

I literally waited in line 10-15 minutes to play (and lose) in, like, one minute. NEXT.

OMG they have Frogger! I loved Frogger! This Frogger is MUCH harder than it was on my Playstation. Next.

Alright, DigDug, this is it. This is the final straw, would I have made it in the 80s or failed miserably/been “too cool” for the arcade?

Y’ALL! I am the DigDug Queen! Move over, Mad Max! There’s a new player in town!

Ugh. There is a line of people behind me so I guess I’ll move on.

Stop what you’re doing! They have a Scoops Ahoy station! Yaass, get out of the way kids!

Update: Scoops Ahoy is nothing but a photo op. There is no Ben and Jerry’s covered with a Scoops Ahoy logo. Man, what a missed opportunity.

Okay, this is it. The last thing on my list is the photo booth to commemorate this Strange Saturday, and minus a constantly steady line, I managed to make my way through with ease.

Alright, guys. There you have it. My day at The Jimmy Carter Library & Museum was educational, fun, and strange, to say the least. I look forward to the Strangers Things events growing larger as the fandom continues to plead for more. Until then, I will leave you with this little tidbit of insight: (spoiler alert if you have not seen season 3) Suzie-Poo killed* Hopper. Over and out.

*Killed is a term used loosely in this article as a means to convey the author’s utmost anger at the cliffhanger left in season 3 that was undoubtedly caused by Suzie. Many fan theories and conspiracies point to Hopper’s survival in a manner that has yet to be determined but has caused much debate and the author is in agreement with one or all of the conspiracies. The author’s stance on Suzie “Hopper Killer” Poo is hers and hers only and does not reflect the opinions of the owners of this publication.

Carrie
Carrie is the owner of Atlanta Movie Tours and loves everything geeky about #GeorgiaFilm. She’s mastered the art of the inside scoop and is involved in the film and tourism industries across Metro Atlanta and Georgia. She is an entrepreneur, dog lover, scuba diver and wanna-be beach bum, who’s favorite movie is The Lost Boys and favorite shows include Murder, She Wrote and the Georgia-filmed The Walking Dead and Stranger Things.

Georgia Film Spotlighted with Georgia On My Screen Exhibit