Wow! If your head isn’t spinning, you aren’t keeping up with the craziness coming out of Anaheim D23 Expo 2019! This is fan-demonium at its best! We get to hear about everything Disney is working on and then sit back and wait, but that’s part of the fun, right? Hmmmm… Nevertheless, onward we go into the depths of the mind of Disney and these days it’s way more than just theme parks and film so twice, triple, quadruple, the exciting announcements! Here are some of the highlights from the Expo we wanted to make sure you didn’t miss!

Why not start with something near and dear to our heart, expansions of the parks we love and experiences that just keep getting better! Growing up in South Florida, the Disney parks were a regular thing and some of the parks haven’t changed much since then, but oh they are going to!

In a world all about taking experiences to a new level, they will be taking them to a new galaxy…far, far away with the Star Wars: Galactic Starcruiser two-night adventure aboard the Halcyon at the Walt Disney World Resort in Orlando. D23 Expo guests got a first glimpse of the new model, which is part of the Chandrila Star Line fleet, and amazing visual effects they will be employing, which all feels very Fifth Element to us, where do we sign up?!? Just check out that scale comparison with the Millennium Falcon!

The good folks at DPEP had super exciting news on the Epcot front, one of our favorite parks, as they have begun a massive transformation, bringing many new experiences, lands and park entrance our way! Journey of Water, Inspired by Moana, will immerse guests in a maze-like water adventure through the new land with various interactive adventures along the way. The new Epcot Experience center will also be opening later this year where the former Odyssey Events Pavilion used to be. Guests will have the unique opportunity to step inside the magic and innovation behind this amazing park and engage in interactive experiences from Walt Disney Imagineering.

The Expo also featured innovations in existing offerings, new concept art around the park, “Taste Your Way Around the World” merchandise, debuting at the Food & Wine Festival (Aug 29 – Nov 23, 2019) and so much more! Personally, I’m pretty stoked to get to walk Cherry Tree Lane in the first-ever Mary Poppins Attraction! While we are only scratching the surface of the announcements and excitement, we would be remiss if we didn’t include exciting Marvel news! The Avengers Campus, more DPEP awesomeness, will connect the Disney California Adventure and Disneyland Paris in Superhero-themed lands where Avengers are searching for new recruits. D23 Expo guests got a few sneak peeks of what’s to come at the “Imagining Tomorrow, Today” pavilion and this definitely makes those Disney World Resort die-hards, like us, anxious to branch out!

Disney+, The Mandalorian & Check Out Those Stormtroopers!

We’re all set for Disney+ streaming and at the D23 Expo, we got a taste of what’s to come with a new poster and the official trailer for the first-ever Star Wars live-action series, The Mandalorian, streaming bingeing Nov 12th. Of course, in true D23 Expo fashion, producers Dave Filoni and Jon Favreau were joined on stage by a host of series stars, including Carl Weathers, Giancarlo Esposito, and Taika Waititi to introduce the trailer. While the sun is shining in the poster, this appears to be a dark place…sign us up! “Set after the fall of the Empire and before the emergence of the First Order, The Mandalorian follows the travails of a lone gunfighter in the outer reaches of the galaxy far from the authority of the New Republic.” Check out the official trailer here!

D23 also showed off one heck of a collection of stormtrooper armor spanning 40 years of Star Wars films and brought to you by the fine folks at Lucasfilm. They even included the brand-new Sith Trooper, in all of its shiny red glory, from the highly anticipated Star Wars: The Rise of Skywalker. The ninth and final film of the saga was definitely talked about during the Expo and not only did they have the Sith Trooper on display, but they unveiled the First Order Jet Trooper, complete with rocket packs, a game-changer for sure! 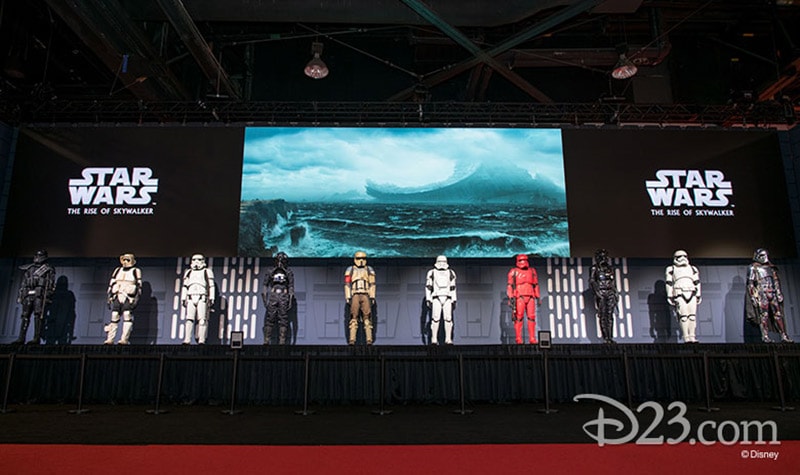 There were hints of a second Disney+ Lucasfilm live-action series following the rebel spy adventures of Andor prior to the events of A New Hope with Diego Luna and Alan Tudyk reprising their Rogue One roles. While we all have to wait until November, D23 guests got the chance to check out the Disney+ app and definitely hearing great things. At a price of just $6.99/month or $69.99/year, it’s going to be another big win for Disney!

FORKYYYYY! Ok, so we all love Forky and joked during Toy Story 4 that we need an all-Forky show/movie, well Disney was listening and we’re getting it! Forky Asks A Question will feature Tony Hale reprising his voiceover work in this new shorts series from Pixar and explores deep philosophical questions, like “What is cheese?”. If this doesn’t make you sign-up for Disney+ nothing will! 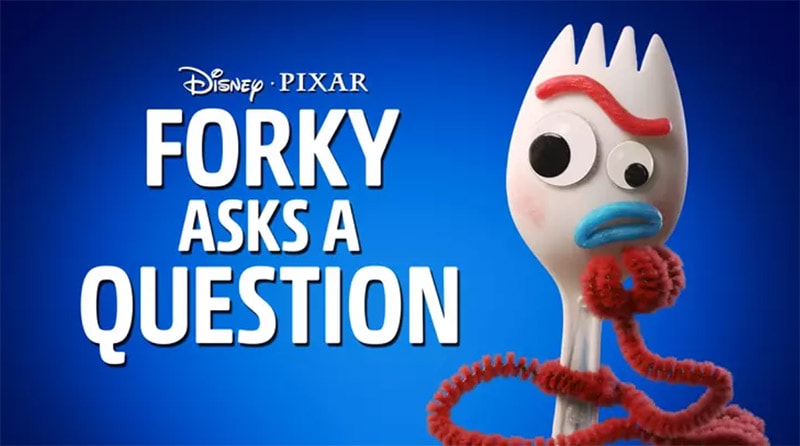 The list of announcements for Disney+ at D23 Expo was intense, to say the least, and while we all have our favorites, there was a whole lot of Marvel, aside from the amazing Marvel Studios announcements of She Hulk, Ms. Marvel, and Moon Knight, that tie-in our geeky #GeorgiaFilm love. The live-action adaptation of Lady & the Tramp, starring Tess Thompson, Justin Theroux, and Yvette Nicole Brown dropped their first trailer and Brown even adopted one of Rose’s doubles, Harley…too cute! Noelle, starring Anna Kendrick, who is no stranger to filming in Georgia, and Billy Eichner, brought the Christmas spirit to D23 and fulfilled Kendrick’s dream of being in a Christmas movie. Stargirl, based on the critically acclaimed New York Times best-selling novel announced that it will launch in early 2020 and (insert drumroll) The Falcon and The Winter Soldier was officially announced and will star, not only, Anthony Mackie & Sebastian Stan, but Emily VanCamp will be back as Sharon Carter and Wyatt Russell will portray John Walker. Filming is ramping up around Atlanta so we will keep our eyes peeled!

Carrie
Carrie is the owner of Atlanta Movie Tours and loves everything geeky about #GeorgiaFilm. She’s mastered the art of the inside scoop and is involved in the film and tourism industries across Metro Atlanta and Georgia. She is an entrepreneur, dog lover, scuba diver and wanna-be beach bum, who’s favorite movie is The Lost Boys and favorite shows include Murder, She Wrote and the Georgia-filmed The Walking Dead and Stranger Things.