‘A Beautiful Day in the Neighborhood’ Review: A Great But Unexpected Film 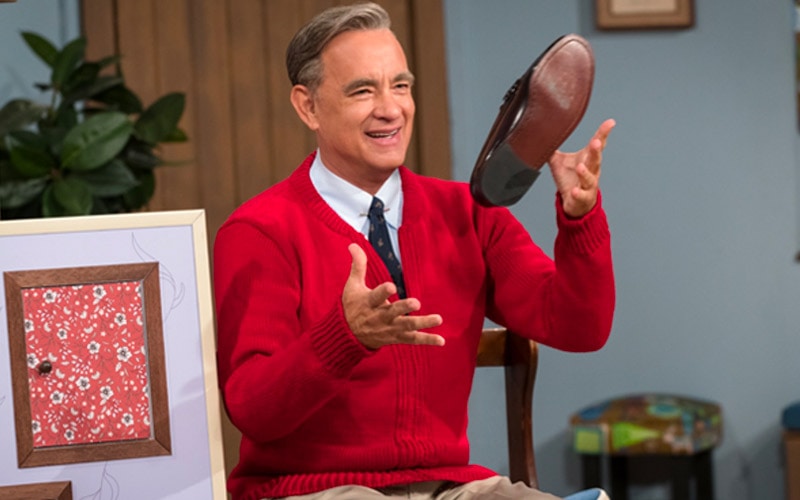 A Beautiful Day in the Neighborhood Review:  I was a huge Mister Rogers fan growing up, as I’m sure many of the movie-goers for this film were. Fred Rogers made an incredible impact on so many of us. And while Mister Rogers Neighborhood was a true gem when it came to children’s tv -- that’s not why Fred is worth celebrating. He’s worth celebrating because of the person he was.

Rogers truly cared about everyone he came into contact with -- even if it was only through a television screen. That level of compassion and purity in a human seems almost mind-blowing to us in 2019, which is sad in its own right. How could one person care so much about so many people? Why was Rogers the way he was? If you’re looking for those answers with this film, you won’t find it. I’d point you towards Morgan Neville’s award-winning 2018 documentary Won’t You Be My Neighbor? if you really wanted to know more about Rogers’ life.

But before I dive into what I did and didn’t like about this film. Let me give you the official description of A Beautiful Day in the Neighborhood which debuted at the Toronto International Film Festival earlier this fall.

Tom Hanks portrays Mister Rogers in A Beautiful Day in the Neighborhood, a timely story of kindness triumphing over cynicism, based on the true story of a real-life friendship between Fred Rogers and journalist Tom Junod. After a jaded magazine writer (Emmy winner Matthew Rhys) is assigned a profile of Fred Rogers, he overcomes his skepticism, learning about kindness, love, and forgiveness from America’s most beloved neighbor.

A Beautiful Day in the Neighborhood Review: What I Liked And Didn’t Like

The film is incredible. I need to say that before I dive into what’s coming next.

The entire cast truly shines here -- Tom Hanks plays Fred Rogers with stunning accuracy. However, it still felt like Tom Hanks as Fred Rogers. It’s hard to get lost in that character. Perhaps, it’s because I watched so much Mister Rogers as a child that the subtle differences here register more strongly for me.

Susan Kelechi Watson, Maryann Punkett, Enrico Colantoni, Carmen Cusack -- they all do fabulous jobs as well. And director Marielle Heller (The Diary of a Teenage Girl) finds a really unique and creative way to tackle the “in-between” scenes which pay a beautiful homage to Mister Rogers Neighborhood.

So, you probably here my “but” coming. The movie posters, the hype, and the trailers don’t make it 100% clear that this film isn’t actually about Fred Rogers. It’s about the jaded magazine writer, Lloyd Vogel (played by Rhys), and the impact that Rogers has on his life and his relationship with his father (played by Chris Cooper). The script and overall plot are wonderful. It just wasn’t at all what I expected. And that seemed to be echoed in the film reviews I was hearing from my fellow critics as well.

The first third of the film is almost disorienting because of this. You’re learning about Vogel and his family, and you almost feel like maybe you’re sitting in the wrong theater. However, as the film continues and Mister Rogers appears more and more throughout, you realize this film actually does a beautiful job at complimenting who Mister Rogers was. He was selfless and cared more about the impact that was making on others. This movie serves as a beautiful analogy to that.

My only real complaint is that it just wasn’t what I was expecting.

I’d still love to see a film (that wasn’t a documentary) really explore Mr. Rogers’ life and his passion for the decisions he made with the tv show. Until then, I appreciate this film for what is, and I’ll still recommend the Won’t You Be My Neighbor? documentary if you really want to see a movie that does Fred Rogers justice.

A Beautiful Day in the Neighborhood hits theaters today. And it will likely claim #2 at the box office against Disney’s Frozen 2. That being said, for those of us that don’t have kids but want to relive a little bit of our childhood, this film does a beautiful job of reminding us to not let life get you down -- or make you jaded.

A Beautiful Day in the Neighborhood Review:

Jeff Ayars Talks 'This Is Our Home'