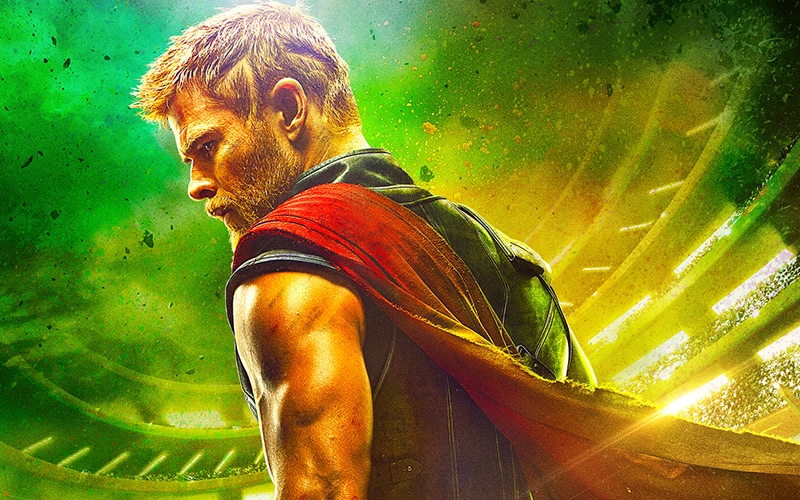 A new Thor movie is set for release on November 5, 2021 and director Taika Waititi recently revealed that fans can expect “bigger and louder and more bombastic” adventures from the fourth installment of the series, Thor: Love and Thunder.

The third iteration in the Thor-specific franchise, Thor: Ragnarok, was a big hit at the box office and many fans credit the fun-loving, adventurous, and comedic tone for the film’s success. After all, who didn’t laugh when they released the Hulk in Ragnarok and Thor shouts, “I know him! He’s a friend from work!” Fun fact: That line was improvised and the idea came from a guest on set.

“We had a young kid, a Make-A-Wish kid on set that day. He goes, ‘You know, you should say, ‘He’s a friend from work!’” actor Chris Hemsworth told Julia Cunningham, an Entertainment Weekly (EW) reporter.

The line is comedy gold, just like the Grandmaster’s whimsical and pompous air. The character, brought to life by Jeff Goldblum, sported thick black eyeliner, a metallic blue streak on his chin, and a bulky gold robe with shoulder pads. The Grandmaster takes the Hulk and Thor prisoner, ultimately pinning them against each other in what he hopes will be an epic battle and fight to the death.

Waititi plans to step up the comedy and go to new heights in the next installment of the Thor series, saying he wouldn’t stay on as director otherwise.

“There’s just gonna be some really crazy stuff in the film,” Waititi concluded.

Although the director didn’t get too detailed and left fans hanging in regards to the exact storyline, there are some things we do know. Obviously, Chris Hemsworth will reprise his role as God of Thunder and Asgardian Thor. Tessa Thompson will be back as Valkyrie and director Taika Waititi himself will continue voicing Korg, Thor’s new friend and a member of the Marvel Universe’s Kronan race. Perhaps not so obviously, Thor’s former love interest Jane Foster, played by Natalie Portman, will make a reappearance in Thor 4.

Portman hasn’t appeared in a solo Thor movie since Thor: The Dark World. Even then, she wasn’t available to film some of the concluding scenes with Hemsworth. Instead, the Australian actor and leading man enlisted his wife Elsa Pataky to take part in kissing scenes at the end of Thor: The Dark World. Wholesome, right? Portman did play a brief role in Avengers: Endgame, although the scene was a flashback and originally filmed years ago.

Endgame is also the last time we saw Thor, during which he was busy traveling to the past and back again. During a brief scene with his mother, she encourages the Asgardian to have the courage and, more importantly, to take a break from eating pizza, drinking beer, and playing video games with his friends. The scene takes place in the beautiful land of Asgard, with eye-catching stone backdrops and stunning glass mosaic windows. In our world, these mosaics date back 300 years before the birth of Christ and create scenes in colored glass with an ethereal glow. As such, they fit in perfectly in the ancient but timeless world of Asgard. At the conclusion of Endgame (spoiler alert!), Thor leaves Valkyrie to rule Asgard while he departs with the Guardians of the Galaxy on new, greater adventures.

That creates a ton of possibility for Thor: Love and Thunder. Will the Guardians show up? Will Groot have any screen time? Did those adventures already come to a close? What does Waititi mean by “crazy things?” These may be some wild guesses, but if a helicopter in our plain world has traveled a whopping 2,213 miles without stopping to land, the possibilities for Thor and friends in an expansive galaxy are practically endless.

You’ll have to turn up at your local movie theatre on November 5, 2021 — or not too long after! — and find out. Despite 69% of Americans saying that low back pain affects their day-to-day lives, Americans will still undoubtedly flock to the movie theatre to see the latest installment in the Marvel Cinematic Universe. We don’t expect something as trivial as back pain to stop moviegoers. Neither do Waititi and box office officials. They’re fully expecting a huge turn out for the next “bigger, louder and more bombastic” installment of Thor.