Some of those new releases are Marvel series’ and…we can’t explain just how excited we are for them. In 2019, it was revealed that Jeremy Renner’s Hawkeye would get a series on Disney+. We were also made privy to news that Ms. Marvel would join the ranks with her own solo series, too. Those are in addition to series’ like The Falcon and The Winter Solider, Wandavision, and Loki.

When news first broke about the series’, release dates weren’t initially set. As time has gone on, we’ve learned a bit more about the projects. In 2020, we’re going to get The Falcon and The Winter Solider and Wandavision with Loki following in early 2021.

During Hasbro‘s 2020 New York Toy Fair presentation, a graphic was revealed for upcoming Marvel releases. From theatrical releases to Disney+ and even Disney XD, there are a number of projects coming to various screens in 2020 and 2021.

While rumors have been going around for a while about possible release dates for upcoming Marvel projects, this one holds some merit. Hasbro will debut toys/merch alongside Marvel releases, so they would know better than most! 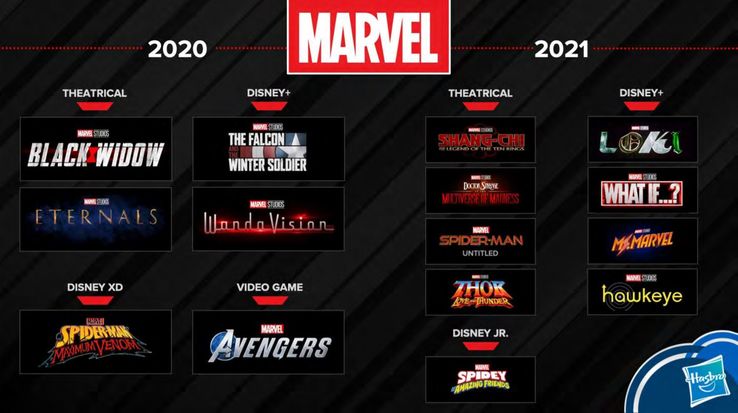 We hope to hear more news soon from Disney+ about the releases coming in 2021. We also can’t wait to find out what goodies we’ll get with each debut. Our closets, shelves, and desks are filled with pop culture merch. We can’t get enough.

Which Marvel Disney + premiere are you most excited for? Let us know!