Saying I was excited for the 2020 Emma is an understatement. Being the Janeite that I am, I’ve been counting down the days until this take on Jane Austen’s beloved classic released.

Before we dive into this review, let me start by saying that when I was 13, I read Jane Austen’s Emma. Roughly half an hour after I finished the novel, I decided that from that moment forward, I would go by Emma. Yes, I gave myself the nickname Emma, precisely because of Jane Austen. It wasn’t a far stretch. My name is Emily. But still, I was in search of my Mr. Knightely, and I had a knack for matchmaking. So moving forward in this review, know that you are dealing with a serious Janeite over here.

For those of you that might not be as familiar with the story, Emma is a classic and a comedy. To sum it up, it’s about growing up, recognizing your faults, finding your person, and earning your happy ending.

Of course, I had high expectations with this version, and I had the cast of the 1996 Emma still very much at the forefront of my mind as to how I imagined the characters. Mr. Knightley seemed to forever have the dark, mesmerizing eyes of Jeremy Northam. This fact made the first half of the 2020 Emma a bit of a struggle for me in regards to Knightley. That being said, the chemistry that flowed effortlessly from Johnny Flynn and was so brilliantly received and reciprocated by Anya Taylor-Joy… This 2020 take on the classic is now my favorite, and Flynn is now my vision of Mr. Knightley. 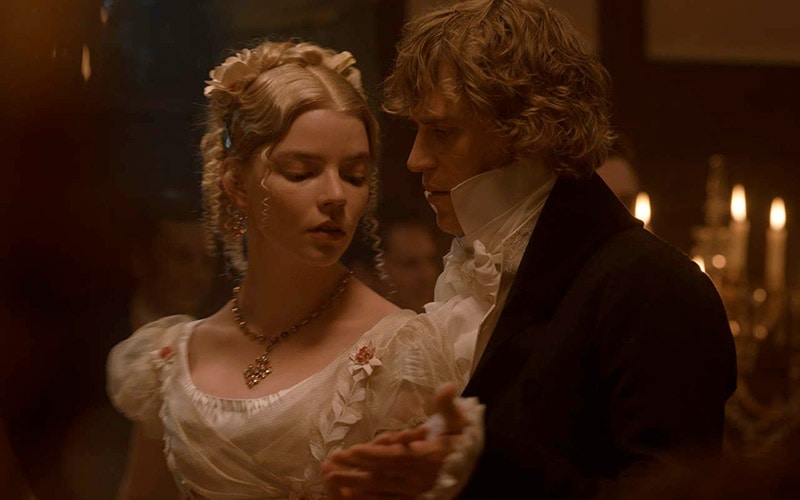 There are so many things this film does well – the casting is perfect for starters. Anya Taylor Joy grasped the essence of the character, and what made us fall so in love with her.

Not to take us on a tangent, but in 2017, when I visited the Jane Austen museum in Bath, UK – I inquired about the shocking (and honestly rather disturbing) lack of Emma memorabilia in the gift shop. I arrived ready to purchase anything that had “Emma” on it. However, I was informed that Emma was considered to be one of Austen’s least-liked characters. Naturally, I didn’t share my story about naming myself after the rather charming (in my opinion), witty, and beautifully flawed character.

But I digress. I adore this version. As I said, the casting was perfect – but even more perfect was the overall design of the film. The insanely pretty costumes complimented their every surrounding in every scene. And every scene was a perfect color palette that I wanted to pin to my Pinterest. Every moment and every shot was so well thought out and executed. It’s like Jane Austen walked into an Anthropologie in the 1800s, and angels started to sing… It’s just the most breathtakingly beautiful combination of color, costumes, and sets that I’ve ever seen.

I could write a novel on why I cherish this story, and why I’ve fallen in love with this most recent take on the classic. But ultimately, you have to see it for yourself.

While I understand that not everyone is the Jane Austen fangirl that I am, I encourage any Austen fans or literary fans, in general, to check out this version of Emma. The film manages to stay true to the classic while also making it feel modern, like a millennial take on the story, which is notably smart beyond its years. And if that isn’t enough to convince you, the palpable chemistry between Anya Taylor-Joy and Johnny Flynn will be.