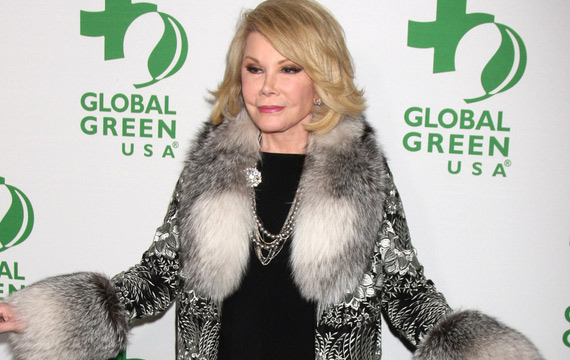 Broadway bosses have reversed their decision not to dim marquee lights in memory of Joan Rivers following a backlash from fans.

Officials at the Broadway League initially stated the legendary comedienne would not receive the traditional theatre tribute as she is not “synonymous with Broadway”, but their explanation prompted outraged devotees to launch a petition online, calling on executives to overturn the ruling, noting that Rivers had graced the New York stage three times and was even nominated for a Tony Award in 1994.

Celebrity fans, including Cyndi Lauper and Modern Family star Eric Stonestreet, also backed calls for a Broadway tribute, and now League chiefs have given in to the public pressure.

In a statement released on Tuesday, executive director Charlotte St. Martin writes, “Joan Rivers loved Broadway and we loved her. Due to the outpouring of love and respect for Joan Rivers from our community and from her friends and fans worldwide, the marquees of Broadway theatres in New York will be dimmed in her memory tonight, at exactly 6:45pm for one minute.”

Rivers was nominated for Best Actress in a Play at the 1994 Tony Awards for her role in Sally Marr… and Her Escorts.

The 81-year-old died on Thursday, a week after suffering a cardiac arrest during a routine throat operation. She was laid to rest during a star-studded funeral in the Big Apple on Sunday.

Teresa Palmer Too Blessed to Be Stressed Over Celebrity Photo Leaks

Did a Dancer Just Confirm the Taylor Swift/Katy Perry Beef?