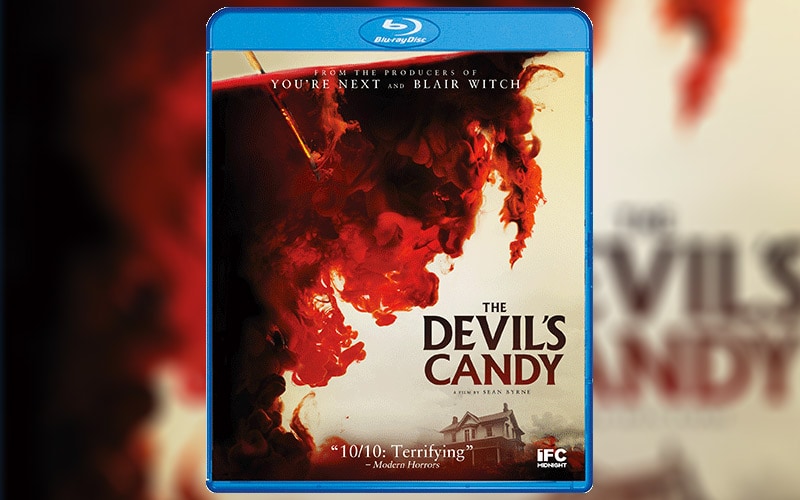 Do you remember Ethan Embry? Anybody that grew up in the 90’s almost certainly does. He was in a string of movies including Can’t Hardly Wait, Vegas Vacation, Empire Records, and my personal favorite That Thing You Do before he seemingly dropped off the face of the earth. True, he did appear in a commercial in a parody of National Lampoon’s Vacation and had a brief stint on The Walking Dead before quickly being killed off, but overall you don’t see him around much these days. So when Scream Factory sent me a copy of their newest release, The Devil’s Candy, I was pleasantly surprised to see him in a leading role. As a guy I remember as the quintessential teen in the 90’s it’s a totally different role to see him take in almost every way imaginable.

The story itself is not entirely original; it’s probably one that you have seen in some incarnation again and again. It starts with a young man playing a guitar very loudly to keep the voices in the house out of his head. When his mother unplugs his amp he is compelled to kill her. A few years later a nice family, a father, mother, and daughter, moves into the house. The father, played by Embry, is a struggling artist that almost immediately starts hearing voices and getting dark vision that some through in his paintings. The young man from the beginning shows up and starts talking to the daughter. This is the story that plays out and gets more intense. The father falls deeper into darkness and the influence of the voices while the young man gets more and more aggressive in pursuit of his daughter. Ultimately, there is a showdown in which the influence of the voices is at odds with saving the family.

As I said, this is a familiar story and I felt like I could tell it because in this case it’s not the story that is as important as the presentation. The director, Sean Byrne (The Loved Ones), does a good job at pacing and creating tension. Over the course of 79 minutes we can see the story unfold in a realistic manner and there are times when he really takes us places that are super dark. But the real heroes of the movie are the cast. Everybody does a superb job in their performances to create characters that are not only realistic, but are likable. This is especially true of Ethan Embry, who creates a likable father figure that rings true. He’s in the late 30’s, has kind of a long-hair grunge thing going on and is still very likable. I keep saying this because I find it to be key to making a great suspense film. So many times I watch a movie and by the end, in all honesty, I really want the “heroes” to die (Paranormal Activity). I don’t get invested and lose interest. What the director manages to do is create characters that you tend to care about and therefore really want to make it to the end. That’s where this movie really shines.

The quality of the final product is a little hard to describe. The movie itself was filmed rather cheaply and with a constrained budget for effects and such so knowing the source material, it does a fine job of maintaining those tones. It doesn’t have super defined images in many of the scenes, though I tend to think much of that was by design. There is something very artistic about the whole thing. Much of the lighting is a bit strange, but works for the mood of the film, though I honestly am not sure if this was intentional or simply something that worked out well. The sound is solid sporting a heavy metal soundtrack that never overpowers the scenes nor sinks too far into the background with clarity and no popping or crackling.

Overall, this is a solid release from Scream Factory that fans of horror movies and heavy metal alike will enjoy. It is not a light-hearted movie; in fact it gets very dark and has some extremely gruesome scenes involving children that may disturb many viewers. If you like the general tone and aesthetic of a Rob Zombie movie you will probably find this enjoyable, but it adds another dimension of realism to it that makes it a bit more enjoyable and has you wanting to see the family make it to the end.

The Devil’s Candy is available from Scream Factory on Tuesday, September 26, 2017

Airun is a contributing writer for FanBolt.com. She's a young writer who loves to travel, teach and dedicate time to the world of television and cinema. Editor of her own website in Spanish & English, she's currently writing for FanBolt reviews and news about some TV Shows.