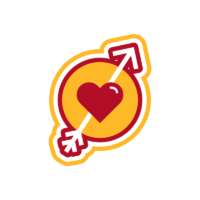 Have you seen Bros? Are you a fan? Geeked out over the movie?

Then collect the Love Is Not Love Fan Badge below (inspired by Billy Eichner’s song in the film) and share your thoughts on the film here.

From the ferocious comic mind of Billy Eichner (Billy on the Street) and the hitmaking brilliance of filmmakers Nicholas Stoller (Forgetting Sarah Marshall) and Judd Apatow (The Big Sick), comes Bros. It’s a a smart, honest, and hearthfelt romantic comedy about finding sex, love and romance amidst the madness.

The film stars Billy Eichner, the first openly gay man to co-write and star in his own major studio film. Additionally, the film is directed by Nicholas Stoller, who co-wrote the fim’s screenplay with Eichner. And lastly, the film is produced by Judd Apatow, Stoller and Joshua Church (co-producer Trainwreck).

FanBolt’s Love is Not Love Fan Badge is a digital, fan-made, way of displaying your love for the film. Collect badges from your favorite films, fandoms, and more!

Disclaimer: FanBolt’s Fan Badges are purely for fan enjoyment. They’re meant to digitally represent films that fans have seen, loved, and/or geeked out over. They are not officially endorsed by the studios and are created solely to celebrate fandom culture. Additionally, Fan Badge designs are inspired by the property and fandom, and no infringement is/was intended. Bros is property of Universal Studios.

People who have earned this: