Home » Marcel the Shell with Shoes On Fan 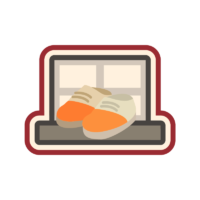 Have you seen Marcel the Shell with Shoes On? Are you a fan? Geeked out over the movie?

Then collect the Shoes Fan Badge below!

Marcel The Shell with Shoes On Movie Description

Marcel is an adorable one-inch-tall shell who ekes out a colorful existence with his grandmother Connie and their pet lint, Alan. Once part of a sprawling community of shells, they now live alone as the sole survivors of a mysterious tragedy. But when a documentary filmmaker discovers them amongst the clutter of his Airbnb, the short film he posts online brings Marcel millions of passionate fans, as well as unprecedented dangers and a new hope at finding his long-lost family. A beloved character gets his big-screen debut in this hilarious and heartwarming story about finding connection in the smallest corners.

FanBolt’s Shoes Fan Badge is a digital, fan-made, way of displaying your love for the film. Collect badges from your favorite films, fandoms, and more!

Disclaimer: FanBolt’s Fan Badges are purely for fan enjoyment. They’re meant to digitally represent films that fans have seen, loved, and/or geeked out over. They are not officially endorsed by the studios and are created solely to celebrate fandom culture. Additionally, Fan Badge designs are inspired by the property and fandom, and no infringement is/was intended. Marcel The Shell with Shoes is the property of A24.

Marcel the Shell with Shoes On Fan