Interview: Ashley Benson from Bring It On: In It To Win It 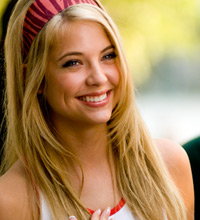 In Bring It On: In It To Win It, Southern California high-school senior Carson (Ashley Benson) arrives at the all-important “Cheer Camp Nationals” determined to lead her squad, the West High Sharks, to victory. But chic New Yorker Brooke (Cassie Scerbo) and her team, the East High Jets, are equally steadfast in their pursuit of the competition’s coveted “Spirit Stick.” As tension mounts between the two rival squads, Carson falls for fellow cheerleader Penn (Michael Copon), not realizing he’s a Jet. When Brooke discovers the budding romance, she raises the stakes by challenging Carson to a one-on-one cheer-off. A spectacular “cheer fighting” sequence erupts into a no-holds-barred brawl and cheerleaders on both sides are suspended from the competition. With their dreams of taking home the top prize all but shattered, the leaders of both squads realize they’ll have to take drastic measures to stay in the game.

We had the pleasure of sitting down with Ashley Benson, who plays Carson in the film, to talk about the film, her training for the film, and exactly how she got time off from the soap opera she was a regular on to do this film.

So Cassie Scerbo was telling me that you guys had to do a cheer camp to prepare for your roles. How was that, that process for you? Was that exciting?

Yeah, I was really excited to do it. I was excited and nervous and everything. I wasn’t expecting for it to be so hard. I thought it was going to be like whatever… cheer camp. But you know it ended up that we had to do our own stunts. I totally went there thinking that I had my own stunt double.

I found out that everything we were doing… we had to learn how to do. So I was totally nervous, because I’m afraid of heights so I had a bit of trouble with it, but I did everything, and I am so glad I did all my own stunts. I was watching other Bring It On movies recently, and it’s like you see them, then you see somebody else, then you see them again, and it doesn’t look real, so I am so glad I did my own stunts. It was so much fun.

Did you have any dance experience at all coming into this?

I have been dancing since I was two, so I have definitely had a lot of training. Before I danced like four or five years, but I had quit because I started acting. So it was definitely hard getting back into it, but once you get back into it, you’re pretty much fine. Cheering is so different from dance though, because you have to be sharp, and you have to be on a point and if you move wrong then you just screw up everything. Luckily, I was on the West Coast side so you’ve got to have a little more flavor, which was fun, but it was definitely different.

What was your favorite part about filming?

I liked everything. I mean, I think I just liked being on set. When I was on set I would always hangout with Tony the choreographer. He made me laugh so much. Before, I met him I had heard things… he’s really meanâ€¦ don’t get on his bad side, because he’s really intimidating. He’s so strict and stuff, but off set, out of rehearsal he is the sweetest guy ever. He always made me laugh. The whole cast made me laugh. I think just being on set was my favorite thing, because I’ve never really done a film before I mean I have, but, this is my first lead in a film, because I have been in a soap opera for a long time. It was definitely, definitely a different vibe. You know everybody is more energetic, and on soap operas it’s very fast pace and very dramatic. So it was, it was definitely different. I had a lot of fun though!

You mentioned the soap and I know you have appeared in roles on other TV shows. What’s the transition like to you? From moving from the TV side to the movies, is the schedule that different? How did you adjust?

Well the soap operas are very different from regular TV shows. With movies, it’s kind of the same, because you take longer to film a scene like with the soap operas. We film 3 episodes a day so you barely get time to see one scene, like you can’t really mess up; you have to know all of your lines. It does help, because when I go onto different sets I try to do everything in one take, but obviously we did more than that. But it’s just different timing wise because we did a movie that’s an hour and thirty minutes and it took three months to do. You do an hour show in like twenty minutes for soaps. So it’s definitely different. But I think that everybody is more relaxed on a movie set. I mean you’re still rushing, but you only do like one scene a day, and sometimes you just have like five lines. So it’s definitely slower.

Now I know with TV series they generally film from July through about, about April right? Is this the same with soap operas?

Soap operas are filmed year round. So, you never really get breaks. You get Christmas off, and you get certain things off. Usually for TV shows you get a four month or three month break, but for soap operas you really don’t get a break, which is cool, I mean I’m fine with that but…

Can you say anything about that or is that far off into the future? I’m not sure how far ahead you guys film of when it airs?

Yeah, I’m not actually on the soap opera anymore. I got off it, I mean I had talked with the producers about doing this film, and they weren’t going to let me do it. I had passed up a lot of other good opportunities this. I really want to do this film. I had just passed up so many opportunities where I could have done a film. So this big thing just came up, and I ended up getting to do this.

I’m happier that I got off the soap though. I mean I give all my credit to them, because I have learned so much from being on soap operas and working with amazing actors who’ve been on there for like thirty, forty years. It was an honor to work with them. It’s definitely given me all my background. But getting off the soap opera helped me a too, because I can move on to bigger and better things. So I am definitely thankful I got to be on a soap opera though, but yeah… [Laughs]

So, what’s next for you in the future?

Hopefully more movies and a TV show. But right now I am just auditioning, and I have a couple of things lined up. But, we will see what happens!

Tags: Ashley BensonBring It On: In It To Win ItMovies

Pitt Calls For Stricter Laws To Protect Kids From Paparazzi