Halloween isn’t cancelled! And if you’re looking for a cool event to get you into the spooky spirit, we have just the event for you!

The revolutionary and innovative creative team at The Dark Zone Network is at it again! This time, the people that brought you ground-breaking television like Ghost Hunters, Ghost Mine, Mountain Monsters, and more, thrill and entertain viewers with four fully packed days of ghost hunting and Halloween festivities at the world’s most haunted ghost ship, the Queen Mary.

Hosted by renowned resident apparitionist Aiden Sinclair, partner Becca Knight, and The Dark Zone’s Susan Slaughter, viewers will be treated to more ghost hunting over four days than seen on most reality ghost hunting shows. This is a fully immersive, interactive experience as viewers watch the locked-down camera feeds from the safety of their living room couches, looking for shadow figures, objects moving or even full-bodied apparitions. When they spot them, and they always do, they’ll communicate directly with The Dark Zone and the on-site investigators to tell them where to investigate next.

Because it’s their favorite holiday, The Dark Zone will host a full, live-streaming Halloween party and Day of the Dead celebration. TDZ proudly announces music performances from Silversun Pickups, Filter, Beasto Blanco, Dead Sara, Metalachi and Sound Barrier as well as celebrity guests Kane Hodder (Jason from Friday the 13th), Chad Lindberg (Supernatural), Calico Cooper (Alice Cooper’s daughter/Beasto Blanco’s lead singer), and Britton Buchanan (The Voice). There will even be a virtual costume contest with prize giveaways. Oh, and there will be ghosts – and ghost hunters.

This event will feature some of the biggest names in the paranormal ghost hunting community to search around in the deepest, darkest depths of The Queen Mary looking for what goes bump in the night. 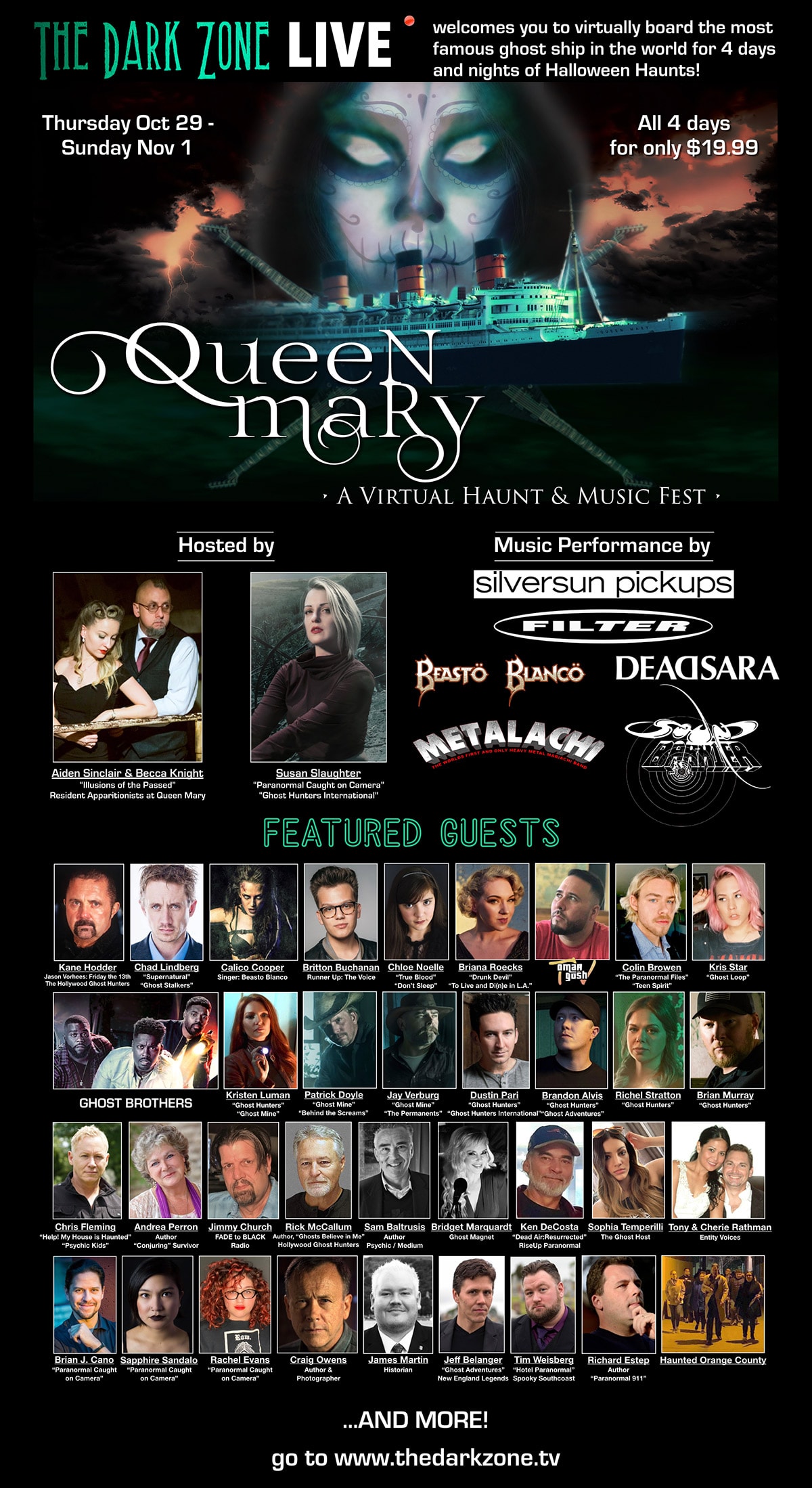 Never before has anyone had full and unrestricted access to the Queen Mary. Because it is currently closed to the public, every level, every haunted area will be virtually accessible by anyone watching the live stream. For the first time, the world’s most haunted ghost ship will reveal her secrets to The Dark Zone’s worldwide audience.

Step into The Dark Zone on October 29th through November 1st for four terrifying nights of Halloween on the haunted Queen Mary. Tickets are only $19.99 for this once in a lifetime, live streaming, fully immersive, virtual event. Go here for tickets and more info.

Live, multi-channel stream available to view on Roku and Apple TV. There will be a free preview on The Dark Zone’s YouTube Channel and Facebook page, Wednesday, October 28th at 5pm PT.