by KimFanBolt
in Movie Reviews, Movies 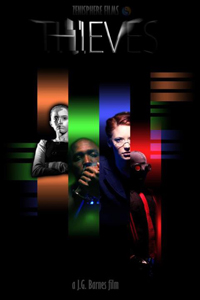 While everyone was watching The Hunger Games this past weekend, I attended a Zenisphere Films press screening. And I must say, that I did not regret turning down an invitation to watch the motion picture adaptation of Suzanne Collins’ novel.

Zenisphere Films is a Detroit-based film company with an enormous amount of potential. Don’t believe me? Their most recent project, Thieves, is living proof. Produced on a budget of less than $300, their futuristic, cyberpunk thriller looks as if they had spent that amount tenfold. The directing, editing and special effects composed by Zenisphere founder, JG Barnes, is nothing short of incredible. With co-founder and assistant director, Ryan Burtney, by Barnes’ side, there is not anything that this film company cannot do.

One scene. One Room. A nice, long chat simmers between a cold and precise Agent Janice Monroe (Kelly Kirstein) and a brilliant, yet, fanatical terrorist, Jason Arthur, (Sheldon Simmons). This man harbors the key to saving lives or the tool of ultimate vanity. But what exactly is it? As the veil slowly burns, the truth unfolds.

The synopsis of the film does not administer many details, but do not let that fool you. Though Thieves is a short film, it delivers much information in a brief amount of time. So much, that it leaves its viewer wanting more.

To me, Thieves seems like the type of film that becomes a cult classic, but not the so-bad-it’s-good type of film. Zenisphere Films has definitely assembled a great, thought-provoking motion picture.

I agree with Barnes when he says, Thieves is not a self-contained piece. It is made quite clear, from its opening moments to its closing frame, that there is most certainly a lot more going on before and after the events showcased in the short film.

Movie watchers who enjoy witty dialogue-driven scripts will fully appreciate the work put in by the Zenisphere crew. Though there is far too much swearing, for my taste, in the conversations between Agent Janice Monroe and Jason Arthur, I thought it was necessary. Without the foul language, the film would lack its sense of urgency and intimidation.

What I am most impressed with and enjoy the most enjoy about Thieves is the cinematography mixed with the special effects. Director of Photography, Matt Morey and First Camera Operator, Melissa Bayer, utilize every angle possible, which truly engulfs the viewer into the short film.

As part of the film’s casts, Didrik Davis and Lauren Kole lend their acting talents to the Zenisphere crew as the Extractor and Anna, respectively. They portray small, but brilliantly important roles in Thieves.

Zenisphere Films has sent Thieves to several film festivals to be shown across the country. The short film will be available on Zenisphere’s YouTube channel after the festivals.

Be sure to keep watch for Thieves, a film you will not want to miss.

Two 'Chucky' Movies In The Works