‘After Earth’ Review: Not Horrible But Bland And Uninspired 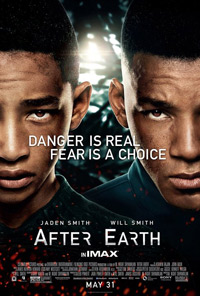 Set a thousand years in the future, M. Night Shyamalan’s latest film, After Earth, is without a doubt the most uninspired and monotonous sci-fi movie of the year. With a lethargic plot sprinkled with lazy attempts at humor, After Earth ultimately crashes just as painfully as the manta-ray-looking spaceship in the film.

The movie follows an interplanetary ranger Cypher (Will Smith) and his teenage son Kitai Raige (Jaden Smith). After a crash landing on Earth, a planet no longer inhabitable, Cypher is critically injured and Kitai is the only key to their survival. He must retrieve the beacon from the tail-end of the ship so that he can alert home for help. The majority of the film follows Kitai’s journey, talking with his dad via an arm video gadget that allows for Will Smith to get some screen time in, but honestly, this film is all Jaden Smith. Fighting pissed-off monkeys, somewhat evolved lions, and an eagle (that we later learn has a heart), Kitai ultimately comes face to face with the ultimate challenge, an alien that can smell fear. Determined to prove himself to his father, Kitai is forced to grow up before the audiences’ eyes… only it doesn’t really come across like that on the big screen.

The similarities between Will Smith and his son, Jaden, are apparent in this film. However, Jaden lacks the charisma that makes his father so successful and entertaining to watch. That being said, Will Smith feels like he half commits in this film. Perhaps taking a step back to let his son really have the opportunity to shine, but at only 14, Jaden is just too young and unseasoned for a role of this size. So much of his dialogue seems unnatural or overacted that the point of the film gets completely lost. Yes, it’s a story about rites of passage and the repairing of a relationship between father and son, but with such weak performances and a bland script – it only leads to indifference.

Overall, by the standards of M. Night Shyamalan’s most recent films, After Earth isn’t terrible, but that’s really not saying much. With an awkward screenplay and actors that seem emotionally neutered the bar isn’t set too high here. I can’t even really compliment the film on its visuals as the CGI was just awful. It’s like a Syfy channel movie with a slightly bigger budget. And while it’s sweet to see the father/son duo on screen – which is clearly the gimmick of why the studio felt this project would work – It ultimately leaves audiences with an “meh” feeling. Take it or leave it, there’s really nothing special here.

7 Questions With 'Oz The Great And Powerful' Star Zach Braff