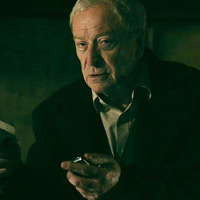 Early this week I got to sit down at a round table interview with Sir Michael Caine to discuss his new film ‘Harry Brown’ where he had a lot to say about being in a gang, the state of the English class system, communist theaters, and Hollywood in general. Read it with an awesome cockney accent and it will be somewhat reminiscent of how cool it really was.

What was it like working on such a violent disturbing picture?

Michael Caine: It is very funny because I never saw it as a violent film, I saw it as a film about violence, which I hate and I am not. The whole movie was made against violence, if you want a message. I made the picture because it was a very good part for me, it was a wonderful script, and I thought it would make a good thriller, but I wouldn’t have made it just for that. The vigilante is there as a warning to who ever is in charge in England – I’m not quite sure most of the time, probably nobody – that if you don’t do something about a whole section of young people who you’ve left to rot this is what happens to you. It is of special interest to me because I come from a whole section of people that were left to rot, but it didn’t work for me.

You went into the military so I’m sure that helped.

Michael Caine: Oh yeah, at eighteen I went into the military. I don’t want to be one of those old guys that says, “Stick them all in the army and all that.” But I do believe that six months – not two years like I did, and no combat like I did – just six months of discipline and learning to serve your country. All of my gang – I was in a gang – we all went in and came out absolutely different. I remember one of them, I was on an airplane, and he came out and he said, “I’m the pilot.” I said, “You can’t be the pilot, you’re more stupid than I am. I couldn’t fly a plane, how the hell did you manage it?” He said, “Well, you know I went to flying school.” Before that it was just a gang on the street, we where what they used to call “Teddy Boys.” We had thick-soled shoes and had hair in a certain way that was called a “DA,” – it looked like a duck’s ass. We were quite rough, but compared to today’s gangs we were like Mary Poppins. Our drug was alcohol and we fought with our fists, but we were only together as a gang for self-defense, we didn’t want to attack anyone.

In the film Harry is reluctant to discuss his military background.

Michael Caine: Combat soldiers never do. If you hear a guy shooting his mouth off about combat he’s never been in combat.

Was it hard to put that behind you?

Michael Caine: Not me. I specialized in cowardice and won several medals. [Harry Brown] wasn’t a soldier like me, he was a real one, he was a Marine. They had to teach me the stab move in the film. A guy came from the army and taught me how to do that. I wouldn’t have learned that as an ordinary British soldier. We just fired at anybody that moved and ran.

You grew up in the area that the movie was shot in.

Michael Caine: Exactly. In those flats, at the entrance to those apartments, there is a mural to me.

How weird was it going back to that area, and seeing how much it had changed?

Michael Caine: It was scary because I didn’t realize quite how dangerous it all was. There, now, instead of alcohol and a fist fight and getting a broken nose, now you’ll get shot or knifed. You have people that have no idea what they are doing because they are so drugged up to their eyeballs, and you could say they’d never do that, but of course they do because you don’t know they’re high. It was extremely dangerous. One of the minor, silly things is that we would do daylight shots with dialogue, and it became a nuisance because every time we shot a shot there was a police siren. All day long, in the daylight on a sunny Wednesday afternoon, we kept having to reshoot.

Were you ever intimidated because you used the real kids from the area in the film?

Michael Caine: No. The reason for that is, you must remember, to them Iamthem. I’m the same. I can talk to them like no one else can talk. That’s why I became more charitable toward them because I understood that 80% of all gangs, including yours [in the U.S.], the most terrible gang here that you can think of, 80% aren’t there to do anybody any harm, they are there so that no one does them any harm. They are there for self-protection. And that’s the people you have to rely on to educate and get them out of the system.

What do you think is the solution?

Michael Caine: Education. It is a sort of class system that is even in America. In England it is a lower class. In England you could be anything, if you are lower class you are lower class; it doesn’t matter if you are red, white, or blue. I know that because I am lower class. You have to get over that and educate people. You say, “You are going to educate this guy who has tattoos all over and two knives in his pockets, what are you going to do? Take him to school?” You have to break down the system, and start with the younger ones.

In England there doesn’t seem to be a breaking down of the class system. Paul McCartney still thinks of himself as a working class lad.

Michael Caine: Well me too. And that is because the upper class in England is useless. So we don’t want to belong to that. So we are our own kind. We will forever be working-class because that is how we think.

Is there a pride in that?

Michael Caine: Yes. Incredible. The reason we call ourselves working class is because we don’t want to be anything else. Being upper classis not a rise in the system. It is probably a downward step if you understand the meaning.

Is this film shining a new light on the problem?

Michael Caine: It’s worked in some areas. For instance the London Times called it “odious.” That is a pity because the film was aimed at you because you don’t seem to know it is there. If you are reading the London Times you are probably educated, in some position of authority, and you could get into some power, and do something about this. As you are that strata of society, and the film is odious then you are responsible for the smell because you created the cesspit that it is coming from.

Do you think seeing the film will get the community itself to do something?

Michael Caine: I think so.

Have you heard any response from the working class about the film?

Michael Caine: I was told by a reporter, “Have you ever seen this film in public.” I said, “No.” He said, “Every time you shoot someone they cheer.”

Emily Mortimer’s character seemed so fragile. Is there that element in the Metropolitan Police?

Michael Caine: I thought it was courageous to put Emily in there instead of some great big butch girl that could throw you out a window. I remember I was walking in the area between takes, and there was a young couple coming along, and she was a very pretty young girl, and they had their arms around each other. When they got to me they went, “Can we have your autograph?” They were both undercover police. She looked just like Emily. I was a bit worried because I was expecting someone a bit more butch. As the mayor of Los Angeles said, “Someone with a bit more shoulder strength.”What Emily had is this very sensitive quality. She’s not a robust girl. She mixed this icy policeman’s thing with this tremendous tenderness for this old man who is crumbling before her eyes.

This is director Daniel Barber’s first feature. How was it like working with him?

Michael Caine: He was fabulous. He did a picture called, “Tonto Woman.” It was a short movie, and he got an Oscar nomination for that. I saw that and I thought this guy knows exactly what he’s doing. When we talked about Harry Brown he said to me, “This is a Western, isn’t it? The guy has to go out and get the villains.”

There is a moment in the film where Harry breaks down. How, as an actor, do you prepare for a scene like that?

Michael Caine: I’m a Stanaslovsky actor. That doesn’t mean that you mumble and scratch your ass all the time. I’m a method actor. The rehearsal is the work, and the performance is the relaxation. The other thing is sense memory. If I want to cry I can do it like that because I picked one thing in my memory that I remember and I will go. I’ve never told anyone what is. Even my wife doesn’t know what it is. You have to remember if you’re an actor, a male actor, is that men do not cry. They will do anything but cry. They stop themselves from crying, and eventually they do cry if it is bad enough. So that is how you know with a man how bad it is for him because he would have stopped himself. “I’m very butch, I don’t cry. That’s sissy, that’s feminine.” If they do then it is overwhelming.

Did you take classes when you were younger for the Stanislavsky method?

Michael Caine: No, I never took any acting classes. Where I learned that was I went to JoanLittlewood’s workshop as an actor in plays, and she taught Stanislavsky during rehearsal, and taught me in particular. She was communist. It was all very Communist and Russian, but she eventually fired me. The reason she fired me was she said, “This is a group theater Michael. We’ll have none of this star nonsense.”

You’ve been making movies for five decades. How has Hollywood changed?

Michael Caine: Hollywood, for me, has stayed the same. All the myths of Hollywood: you’re only as good as your last picture, you’re friends will dump you if you fail, blah, blah, blah. I have in Hollywood, a group of friends who I trust with my life, I’ve had for forty years. Whether I made a flop picture or a successful one it hasn’t changed the slightest thing about them. So I have the highest regard for Hollywood. It can be tough, but only it’s only tough if you haven’t prepared yourself. If you haven’t done an acting lesson, or you haven’t done any acting and you go to Hollywood and say,”I’m going to be a star”, whether you are male or female you’re going to have to sleep with someone. Or there is going to be a Monday morning when some director says, “Action,” you’re going to say, “Oh shit, what do I do now.”

‘Harry Brown’ opens as a limited engagement on April, 30th.