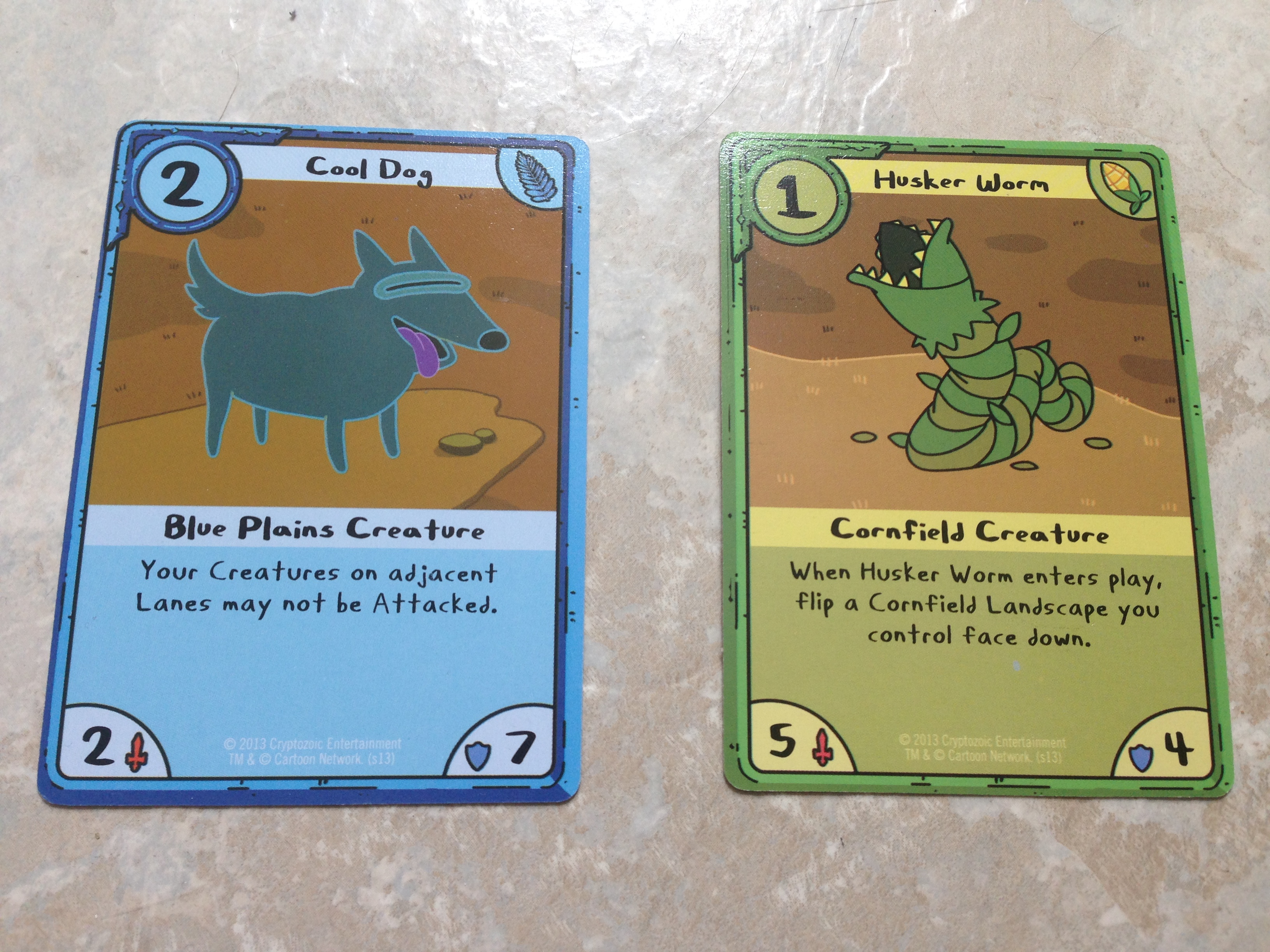 I think just about any Adventure Time fan with even a passing interest in board games is familiar with the Card Wars episode. Finn and Jake face-off in a very Magic: the Gathering-esque card game, with the loser forced to drink a horrific concoction from The Dweeb Cup. Weird Adventure Time shenanigans aside, this was a game I actually would’ve liked to play. Lo and behold, now I (and by extension everybody) can! Cryptozoic’s Adventure Time Card Wars is a real game, and you can play it right now. Assuming supplies aren’t still backordered, anyway.

Adventure Time Card Wars is made up of two standalone sets: Finn vs. Jake, and BMO vs. Lady Rainicorn. Each box contains two decks of 40 cards each (one for each character), large tiles to use for land, a rather absurd amount of hitpoint tokens, and can be played without any modification. Of course you can certainly customize your own decks if you so desire, provided you have enough cards to go around. For the sake of this review I’ll be focusing on the Finn vs. Jake set, as it’s the one I actually own and will probably be the more popular of the two current offerings. 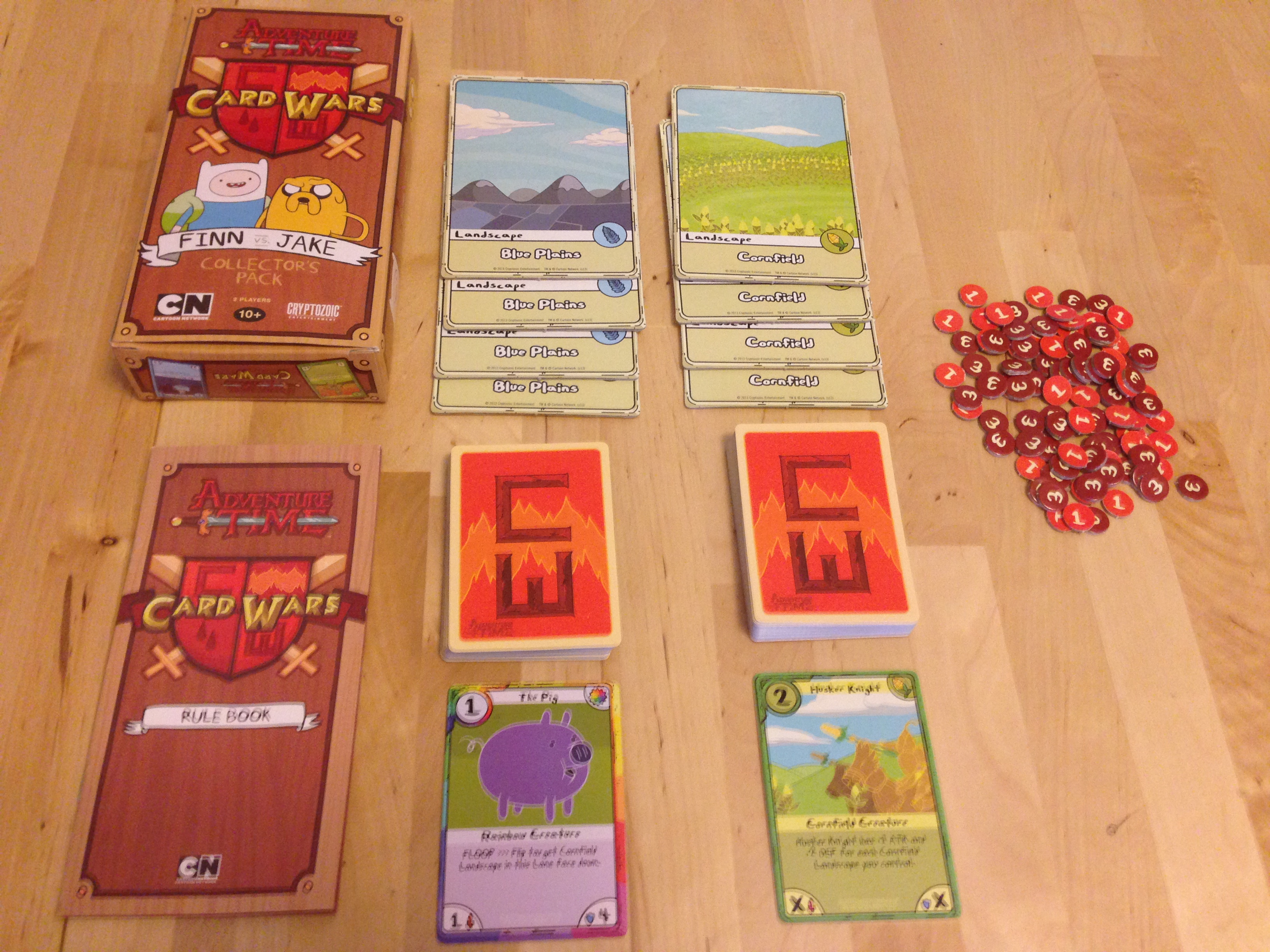 Each deck corresponds to a particular theme and plays differently; with Jake’s Cornfield deck focusing on direct damage and brute force, and Finn’s Blue Plains deck emphasizing extra card draws and lane manipulation. And yes, flooping The Pig has a similar effect to what we’ve seen in the show, so credit to Cryptozoic for staying faithful to the source material. It can be a little tricky for first time players (especially those who aren’t familiar with similar games already) to get a handle on Finn, so I’d recommend starting them out with Jake as he’s much more straightforward. Oh, and set aside some time to punch out those tokens in advance. There are a lot of them.

The cards themselves are great, though. The illustrations are fun, the characters are ridiculous in the best ways, and all the important information is very easy to read. Large icons and numbers depict the amount of damage and defense creatures possess, and figuring out how many actions and how much of a given land is needed to play a card is equally easy to figure out. Some of the phrasing on the cards can be a bit vague at times, though. For example, it’s unclear if the Uni-Knight’s ability to spend an action in order to reduce an opposing creature’s attack is a temporary or permanent effect. I prefer to think it’s temporary because otherwise it would be ridiculous. And what happens if a player puts two Cool Dogs next to each other? Do both Cool Dogs protect each other and create an invincible wall? I highly doubt it but the rules don’t really say one way or the other. 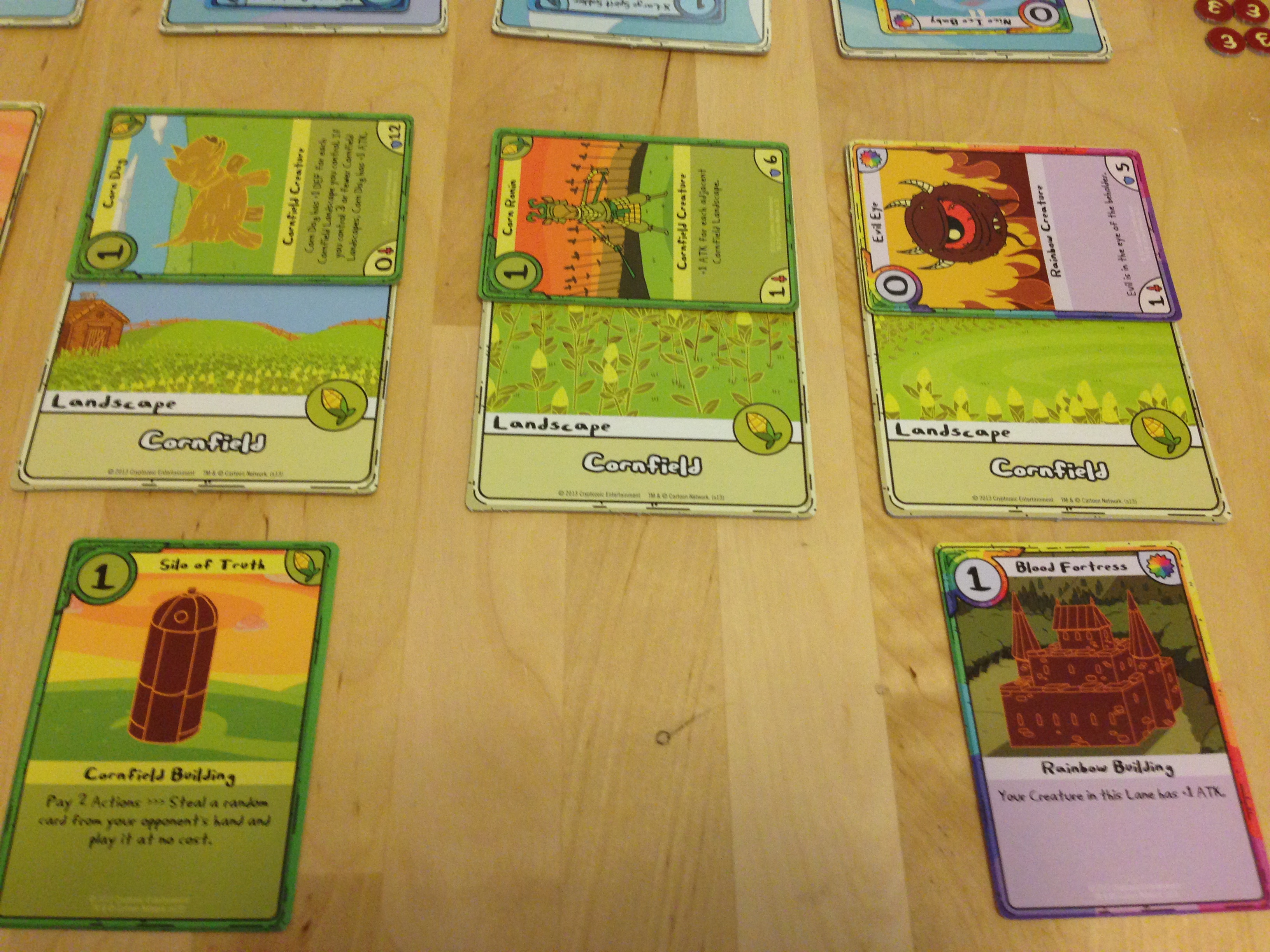 The basics of Adventure Time Card Wars are pretty easy to grasp, and getting through a game (even your very first one) won’t take much longer than a half hour or so. Each player controls four lands, and each represents one of four lanes. When a creature faces another creature in the same lane they typically exchange damage, but if an attacking creature has no direct opponent then damage goes straight to the defending player. Both players take turns filling those lanes with creatures or otherwise messing with each other until one of them loses all of their 25 hitpoints. I do sort of wish there were a better way to keep track of player health, though. As of right now it’s either use the included health counters (they only come in 1s and 3s), or figure something else out like using your own dice or a piece of paper. If Cryptozoic were to release some kind of official health counters I’d be all over them in a heartbeat.

Players each begin their turn with two actions, and various cards will cost anywhere from 0 to 2 actions to be played. The number of actions required also ties in to the number of lands needed; so a Cornfield card with a summoning cost of two will not only require two actions to use but also two active cornfields. Although players aren’t required to play cards on their matching lands. So that two-Cornfield card doesn’t have to be placed on a cornfield (you could drop it on a swamp, desert, etc); you just have to control two cornfields to use it. This means that it’s going to be extremely unlikely to fill all four lanes with creatures right away, and it forces players to weigh their options carefully. Sometimes it’s better to take a few lumps in the long run.

Of course none of this takes specific card abilities into account. Husker Knights are a useful creature that have damage and defense equal to the number of cornfields a player controls, but if the opposing player manages to destroy one or more of those cornfields they could quickly become a liability. Conversely, using the Cool Dog to protect adjacent creatures from attacks is a great strategy, but if the Cool Dog is suddenly destroyed or otherwise removed from play the effect is void. The hectic and ever-changing nature of the playing field is what makes Adventure Time Card Wars so entertaining. It’s possible that only having two decks with little room for experimentation could lead to some repetitive matches, but remember this is only one of two base sets. If you have the interest and the means, you could always grab BMO vs. Lady Rainicorn and start mixing things up. Plus, thanks to the rather simple land system, figuring out what cards you can incorporate into a given deck is pretty easy.

Despite my initial anticipation I’m still rather surprised at how much fun I’ve been having with Adventure Time Card Wars Collector’s Pack: Finn vs. Jake. I’m sure I’ll eventually need to get my hands on the BMO vs. Lady Rainicorn set in order to keep things interesting after a while, but since it’s an enjoyable game that’s also pretty easy to pick up for the first time and teach to new players I don’t really see that being a problem.