My fourth year of Dragon Con madness is officially over. All interviews posted and all social updates have been shared, but I still felt compelled to write one more article. An editorial piece about why I think it’s the ultimate Con to geek out at, and why I think it’s important.

Let’s start at the beginning.

My Dragon Con Panel – The State of Superhero Cinema

It wasn’t my first Dragon Con Panel, but it was the first panel at Dragon Con I’ve ever been on. I was excited and nervous when Friday morning rolled around. I sat next to Spencer Perry and Matt Goldberg as Van Allen Plexico moderated our panel.

The room was at capacity and they had to turn people away. Not a shabby way to start out the convention, right?

After a hour of breaking it all down with Marvel and DC – and me only mentioning Chris Pratt’s good looks once – I headed to the Marriott with my friends. It was time to cosplay and people watch!

While this wasn’t the first year I’ve dressed up, this was the first year that I’ve actually made a costume – handmade a costume from scratch. If you know me, this should be shocking. I barely finished it in time, but once I did – all I could think about was showing it off. 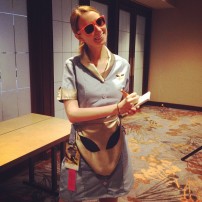 Saturday morning would be the moment of truth. The unveiling of my labor – the cause of stress, blood loss (yay sewing!) and the sappy TV series that I loved 15 years ago. As I proudly left my midtown home sporting my Roswell cosplay as Liz Parker, I found myself encountering multiple hordes of football fans on their way to the local sports bar to pre-game for the “game.” For those that aren’t aware, there are two MAJOR football games that take place in Atlanta the weekend of Dragon Con. The mixing of the two cultures is a bit of a throwback to high school for most of us, at least it was for me as I made my way to MARTA to head down to the convention.

As I walked down the city sidewalks, football fans pointed and laughed at me and yelled, “Nerd!” While it would have probably hurt me 15 years ago, I now wear my geek badge with great honor. But what did bother me was that these were adults doing this in front of small children. Little 5 year olds all dolled up their team gear got to watch their peers make fun of someone who was different. This is not okay. This is how kids learn that bullying is acceptable.

When I arrived down in the “safe zone” of Dragon Con, my heart was warmed by parents hanging out and geeking out with their kids – all dressed up in superhero costumes. That is what we should be teaching our kids. Being cool is embracing what is different – not making fun of it because you don’t understand it.

And that is what Dragon Con is and why it’s so important. It’s a once-a-year event where fans of pop culture, science, comics, and so much can come together and just nerd out. We challenge ourselves and test our skills making costumes that are beyond our abilities – upping the ante from last year. We reunite with our con-going friends to attend panels, share stories, take photos and create memories that will have us instantly longing for the next Labor Day. 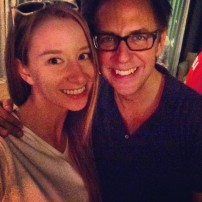 Running FanBolt gives me the opportunity to visit a decent number of conventions each year, and for many years I always referred to San Diego Comic-Con as my Geek Christmas. While I’ll always love Comic-Con, there’s something truly unique and special about Dragon Con. FanBolt has always been “By the Fans, For the Fans” – and Dragon Con is the same way. It’s not the industry trade show that Comic-Con is… despite the crowds that may lead you to think otherwise. I’m a six year veteran of Comic-Con, and while they rock my socks off – Dragon Con still wins out.

The moment I geeked out over the most (meeting and chatting with Guardians of the Galaxy director James Gunn at a party hosted by Star Trek: Voyager‘s Garrett Wang) was definitely the highlight of the convention for me as a fan, but it’s not what I’m taking away from this year. It’s seeing a little boy (no more than 4 or 5) dressed up as Thor asking a grown-up Thor cosplayer for a photo. The little boy’s parents, also dressed up, snapped the picture for him. The wonderment and awe in his eyes told me so much. He’s already a geek, and that’s awesome.

And that is why Dragon Con is important and will always be the ultimate Con to geek out at.