Cirque du Soleil is back in Atlanta with Amaluna! The new traveling show explores a mysterious island through a series of seemingly impossible acrobatic and balancing acts accompanied with vibrant and beautiful costumes and set design. As you would expect from Cirque, it lives up to the high caliber of performances that fans are accustomed to and leaves audiences with their jaws on the floor.

Speaking of leaving jaws on the floor, there were two acts that really blew my mind. There was an incredible contortionist who made the most unlikely positions seem like no big deal. What was truly impressive here to me wasn’t the actual bending (though that was certainly amazing) – it was the actual upper body strength it takes to hold the poses, such as the one featured here.

The second act I really enjoyed was the longest one of the night. A balancing act that would try most anyone’s patience, but this Cirque performer showed grace and composure while assembling the fragile and rather monumental stick structure. 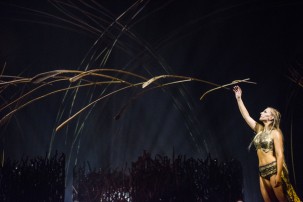 Every act fit perfectly into the overall story that Amaluna was telling about the mystical island, and the music that accompanied each act was a beautiful compliment to the overall atmosphere that the performances created.

This was my eighth Cirque du Soleil show that I’ve seen. I continue to be impressed by all the various acts that seem to be humanly impossible, yet all of the performers make it seem like second nature. And I’m not the only one that feels this way. With Hollywood taking over Atlanta, a slew of celebrities have been spotted at Amaluna, including cast members from CW’s The Originals (Nathaniel Buzolic, Charles Michael Davis and Danielle Campbell) and The Vampire Diaries (Steven R. McQueen), along with IronE Singleton from The Walking Dead joined by ABC’s The Bachelorette Andi Dorfman and Josh Murray, Constantine‘s Charles Halford, Resurrection‘s Frances Fisher, Chloe Grace Moretz, and USA’s Complications cast member Jessica Szohr – just to name a few! So keep your eyes open for stars when you go to the big tent!

And lastly… We have some fun facts for Cirque du Soleil and Amaluna fans!

Amaluna runs through November 30, 2014, and tickets start as low as $35. Visit www.cirquedusoleil.com for more information.