At its core, FanBolt is about things that we’re fans of, and we geek out over – and there are few things we geek out over as much as TV and film…but food happens to be one of them! That being said, we were super excited to attend the 13th annual Taste of Atlanta festival in Midtown!

This year the festival had over 90 restaurants partaking with over 300 food options to pick from! Saying it was a food lover’s heaven is a bit of an understatement…

I was actually asked to be a judge this year for the festival, so I was super excited to be able rank my favorite bites that I had for everyone. We had 20 tickets to work with between Jasmine and I, and thankfully nothing in the VIP area required tickets – so we were able to taste a bit more inside that area.

We arrived early, just a few minutes after the festival opened at noon yesterday. I highly recommend this for those of you that attend next year. The crowds grow throughout the day, and arriving early helps to get your must-haves in before the masses discover them. As soon as we got our map, we found shade and pulled out a pen – marking all of our must-visit booths. 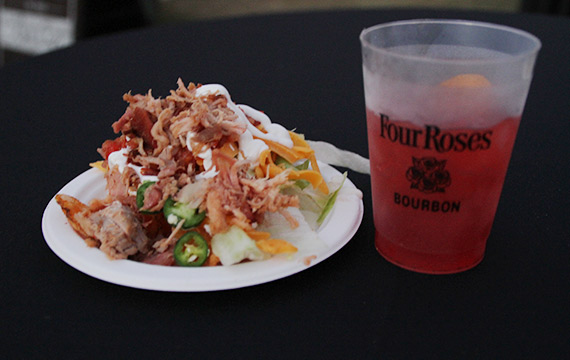 For the most part, Jasmine and I shared without an issue. Although, I think I ate way more than my half of Rosebud’s Lobster and Grits. I couldn’t stop myself… Chef Ron Eyester is a culinary genius.

Here’s our breakdown of the best that the festival had to offer.

I also have to note that Four Roses Bourbon had an incredible cocktail at their booth in the VIP area. The barista mentioned that she had been contacted to add the recipe to the official site, and once it’s up I highly recommend testing it at home. She used a sparking apple cider mixed with Four Roses Yellow Label along with a maple mix that had a hint of spice to it (Not sure what all was in this maple mix – but I feel like it may have been the secret ingredient). 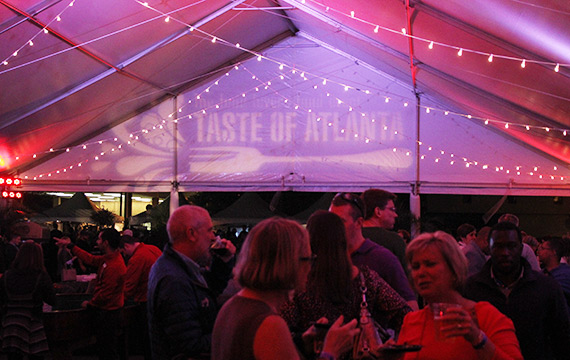 We also had the pleasure of attending the VIP opening night party on Friday night. I highly recommend this experience next year for those of you that are interested in checking out the festival. It’s a great atmosphere with a live band and tastes that are open to all – no tickets required once you’re in the VIP area. The crowds are a little less intimidating, and there are some food selections that are exclusive to that night. Our favorite from that night? Once again Rosebud came in at #1 for me, and they were followed by Jim N’ Nick’s BBQ Nachos – they were amazing!

And if you’re wondering if any celebrities showed up at this weekend’s festival – the answer is yes! Robert Ri’chard, who is in town filming Bolden! was in attendance!

If you missed out on all the tasty goodness this year – be sure to keep an eye out for Taste of Atlanta 2015. It’s one of the best festivals the city has to offer, and it does an incredible job at showcasing the amazing culinary talent we have in this city. We may not be New York or LA, but our chefs could compete with them any day!

FanBites: Highlights and Favorites from Taste of Atlanta 2014