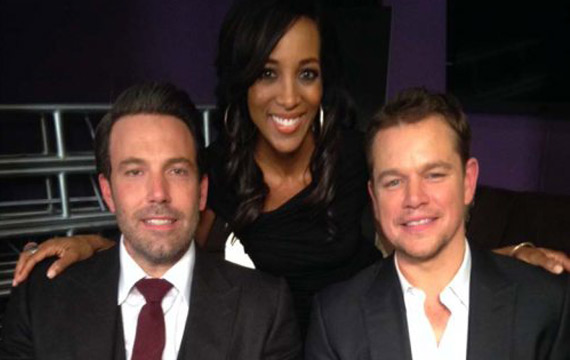 Actor buddies Ben Affleck and Matt Damon sat down to chat with Access Hollywood‘s Shaun Robinson and since both are playing pretty badass characters in upcoming films (Affleck as Batman in Batman v Superman: Dawn of Justice and Damon’s set to reprise his role as Jason Bourne), the interview quickly turned into a battle of the heroes once Shaun asked the two which big screen super stud would win in a fight: Batman or Jason Bourne?

“Well, first of all, Batman is not real and Jason Bourne is,” Matt joked to Shaun of the Caped Crusader versus the rogue CIA operative. Of course Batfleck wasn’t going to let that fly and chimed in,”If Batman is fighting Superman, I think he’s a little past Jason Bourne.”

When it comes to the changes that the two have undergone in their personal lives have informed the way they approached the upcoming season 4. “I hadn’t directed anything when we did the first ‘Project Greenlight’ – I’ve directed three movies since then, and it’s only given me additional empathy for what directors go through,” Ben said. “I know first-hand that the job is harder than I thought it was, I know that there are a lot more decisions than I recognized initially. But a lot of that just comes from getting older and doing more movies anyway. It’s really hard. It’s hard to make a movie that works.”

So when will Ben take on directing his old pal Matt? I wouldn’t hold my breath on that one. “I would never do that. I couldn’t take any direction from him,” laughed Matt.

To read more, you can check out the rest of the pair’s interview over at Access Hollywood: http://ahwd.tv/ZZ1LOZ

Showtime Renews 'The Affair' and 'Homeland'