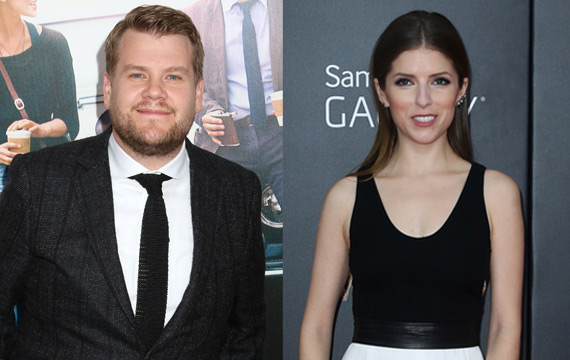 Anna Kendrick was left kicking herself on the set of new film Into the Woods after her co-star James Corden tricked her into thinking Meryl Streep had been fired from the movie musical.

The cheeky British funnyman portrays The Baker, opposite Kendrick as Cinderella and Streep as The Witch in the film adaptation of Stephen Sondheim’s hit stageshow, and he reveals he managed to pull off what he’s hailed as “the greatest thing” he’s ever done by recruiting fellow cast member Christine Baranski to prank their co-workers.

He explains, “On Into the Woods, I managed to convince a small selection of the cast and crew that Meryl Streep had been fired from the film.

“I’m with Anna Kendrick and there’s two members of the crew… (off to) the side, it looks like a heated discussion, and Anna says, ‘Oh, I wonder what that’s about?’ and I go, ‘Oh, did you not hear that they fired Meryl?’ She goes, ‘Oh, shut up, James!’ And I go, ‘No, no, seriously, they’ve fired Meryl.’ She goes, ‘Right!’

“Then Christine Baranski walks over, who is devilishly good fun and loves a hoot, and I managed to just give her a wink as she comes over and I go, ‘Is Meryl OK? I can’t believe they fired her.’ And she goes, ‘She’s in bits’ – just like that, quick as a flash… ‘James, I’ve never seen her like this. Who fires Meryl Streep?’ And Anna goes, ‘Oh my God, he’s serious?’ And Christine goes, ‘Glenn Close is on a private jet, on her way.'”

He continues, “It starts to grow to the point where I’m thinking, ‘Wait, has she been fired?’ and then Meryl comes in in her costume and then people can’t believe that it was ever something they believed. I mean, who would ever (fire Meryl Streep)? It’s ridiculous.”

It's Over: Sony Decides Not to Release 'The Interview'

'Gone with the Wind' Is America's Favorite Film of All Time