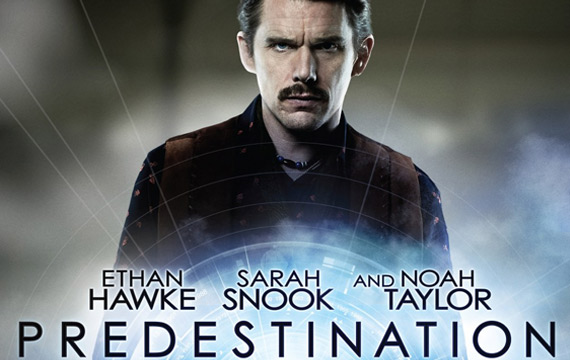 What if the person that ruined your life was in front of you, and you were guaranteed that you’d get away with it? Would you kill them?

That’s the question Predestination, a film based on a short story by Robert A. Heinlein called “All The Zombies,” asks before the first scene even comes to the screen. An interesting question to introduce a rather unpredictable and intriguing film.

Predestination tells the journey of a Temporal Agent (played by Ethan Hawke) as he’s sent on series of time-travel missions to prevent future horrific acts from happening. On his final assignment, he must stop a bomber who has eluded him throughout his career. If he can’t stop him, it will cost thousands of lives.

On his journey, he finds himself bartending when John (Sarah Snook) walks in the bar. John has a pretty incredible story which he shares over a few drinks, and he soon finds himself presented with the same question as viewers at the beginning of the film.

What if the person that ruined your life was in front of you, and you were guaranteed that you’d get away with it? Would you kill them?

The story unfolds from there…

Hawke and Snook both give strong performances and glide through the films’ issues without the viewer blaming them for anything. What are these issues? You’ll know it as soon as you first encounter it, and by it, I mean Space Corps. The idea of an organization like this is truly pulled from the 1960’s when intelligent women still weren’t recognized for their brains if they had a pretty face. Despite excelling at every test Space Corps put Jane through, she ends up being disqualified for due to her physiology.

One might even argue that Jane’s dismissal was fair based on the Space Corps’ objective, but the idea of that corporation as a whole just rubbed me the wrong way and something that was far from founded in reality. Despite this hiccup for me in the film, the rest of the events that unfolded were truly fascinating – even at moments where I was convinced that a useless element was being introduced to the plot – scenes later it would come full circle and surprise me.

If you’re like me you’re skeptical of all movies that are released in January – it seems to be the time of year when films are released that the studio just didn’t quite believe would be winners. However, this one first made its US appearance last March at SXSW. Since then, it’s already made a number of international debuts. Release dates aside, Predestination had a lot of moments that made me strongly dislike it, and then it had considerably more moments I found brilliantly crafted and completely unpredictable. Something that’s incredibly rare for me to find in films nowadays.

The concept of predestination is a fascinating one in and of itself, and this film did a rather amazing job at exploring that idea and creating a complexity that was thrilling for the viewer to piece together. It’s not your typical time-travel movie, and for that I applaud it. Despite the issues I had with the story, I still recommend Predestination. It’s a welcome breath of fresh air in a today’s rather predictable sci-fi landscape.

Predestination opens in Atlanta exclusively at the Plaza Theatre today. However, the film is also now available on VOD platforms as well.