Cartoon Network released a first look at the new take on The Powerpuff Girls, and fans of the original will be happy to see that the characters didn’t undergo some massive makeover.

The reimagined series featuring Blossom, Bubbles and Buttercup is heading to the network in 2016 and will follow the three girls as they try to balance school with being superheroes. Although the girls don’t look too different than their original selves (thankfully), they will be voiced by new actresses.

Amanda Leighton (Blossom), Kristen Li (Bubbles) and Natalie Palamides (Buttercup) are the new voices of the human representations of sugar, spice and everything nice (and a dash of Chemical X). Also, fans of the original series will be happy to learn that Tom Kenny is set to reprise his role as the Narrator/Mayor.

“It has been wonderful to see this new show team bring such passion and positive creative spirit to this iconic property,” said Chief Content Officer, Rob Sorcher in a statement. “We know that fans of every age will appreciate this new take on saving the world before bedtime.

You can take a look at the character artwork, featuring the original arbiters of girl power, below: 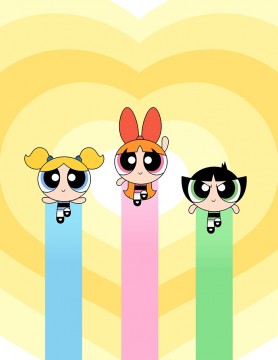 Let us know what you think of the artwork and the revamped series in the comments below!