‘The Martian’ Review: An Impeccable Work of Science Fiction 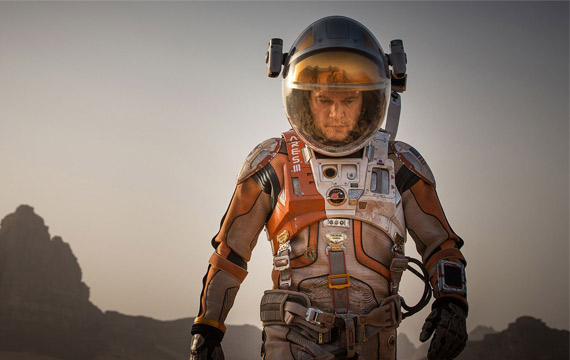 Straight to the point, The Martian was the best movie I have seen in a few years. It is a great piece of science fiction but stays rooted (for the most part) in fundamental scientific principles. The plot line keeps viewers engaged while balancing micro and macro stories. In other words, we get to see an appropriate blend of the psychological and physiological impacts of human isolation, the overarching plight of survival, and the global effort to bring an astronaut home alive.

The story centers around NASA astronaut Mark Watney, played by Matt Damon, in the future when we have enabled manned exploration of the fourth rock from the sun. When an intense dust storm leaves Watney stranded from the rest of his crew, including Capt. Melissa Lewis (Jessica Chastain), Rich Martinez (Michael Pena), Beth Johanssen (Kate Mara), and Chris Beck (Sebastian Stan), he finds himself the lone human being on a planet 140 million miles from his own. With a limited amount of rations, only about a third of what it would take to keep him alive until a rescue mission could be sent to Mars, Watney is forced to innovate to find ways to grow food and keep himself warm and sheltered. Meanwhile, the rest of the nerds at NASA are feverishly coming up with solutions to potentially send extra rations and a rescue vehicle his way.

The aspect of this movie that caught me most by surprise is how genuinely funny it was; it could honestly pass off as a comedy. Matt Damon showed a significant amount of range in his acting and I was impressed at his ability to perform essentially by himself for most of the film. As for the content of the film, whether or not you have a background in any kind of science or engineering, Watney’s methodical approach to just about every task he performs showcases the amount of training it takes to become an astronaut. They have to plan for such a huge number of potential situations and mishaps. Being a botanist by trade is only a small portion of the skill set that was required of him for survival in those types of conditions.

The Martian is released at a very opportune time in our history, in which privatized space travel has pushed the limits in launch vehicle development, water in a liquid form has been discovered on Mars, and NASA is focused on developing vehicle deceleration technologies to overcome the comparatively thin atmosphere on Mars. While highlighting what the future might hold in store for NASA and other manned space exploration beyond our current capabilities, The Martian is also set to be an inspiration to the next generation of scientists, mathematicians, and engineers, similar to what Apollo 13 was for my generation.