It ain’t easy being a superhero, especially when you have a falling out with your super-friends, which is what the first trailer for Captain America: Civil War proves.

The new look at the Atlanta-filmed Marvel movie reveals that because of a few issues that the Avengers can’t seem to see eye-to-eye on (namely how to handle Bucky ‘Winter Soldier’ Barnes (Sebastian Stan) once the government decides to take him out), Captain America ends up being the odd man out for wanting to protect his oldest friend.

“Captain, while a great many see you as a hero, there are some who’d prefer the word vigilante,” we see William Hurt’s General Thaddeus ‘Thunderbolt’ Ross warn Captain America (Chris Evans). “You’ve operated with unlimited power and no supervision. That’s something the world can no longer tolerate.”

It seems that Iron Man (Robert Downey Jr.) agrees that Cap needs to be reeled in a little as well, although his methods are a little rough around the edges. “Sometimes I want to punch you in your perfect teeth,” Stark barks at Rodgers.

Take a look at the intense trailer (and see how many superheroes you can spot) below: 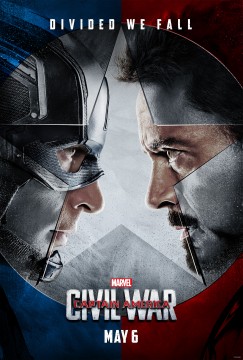 Fans should keep an eye out for new superhero appearances in the film, including Chadwick Boseman as Black Panther and Tom Holland as Spider-Man.

Captain America: Civil War fights its way into on theaters May 6, 2016.

Leave your thoughts on the awesome new trailer in the comments below!