Home » Gaming » Horizon: Zero Dawn Review – All of My Yes

As with anyone who likes video games, I have a tendency to place more importance on some elements than others. It’s a good day when I get to play something that ticks two or three boxes on my list of Stuff Rob Thinks is The Best ™, and there have been way more games than I can count offhand that have hit this mark over the years. My proclivities are a bit too specific and numerous to list them all out, but suffice it to say there’s a pretty wide variety of things that tickle my fancy.

Every so often a game comes along that ticks off way more than a mere two or three boxes. These games often end up being some of my all time favorites, because for various reasons they appeal to me in more ways than the average bit of interactive media. Horizon: Zero Dawn is one of those games. 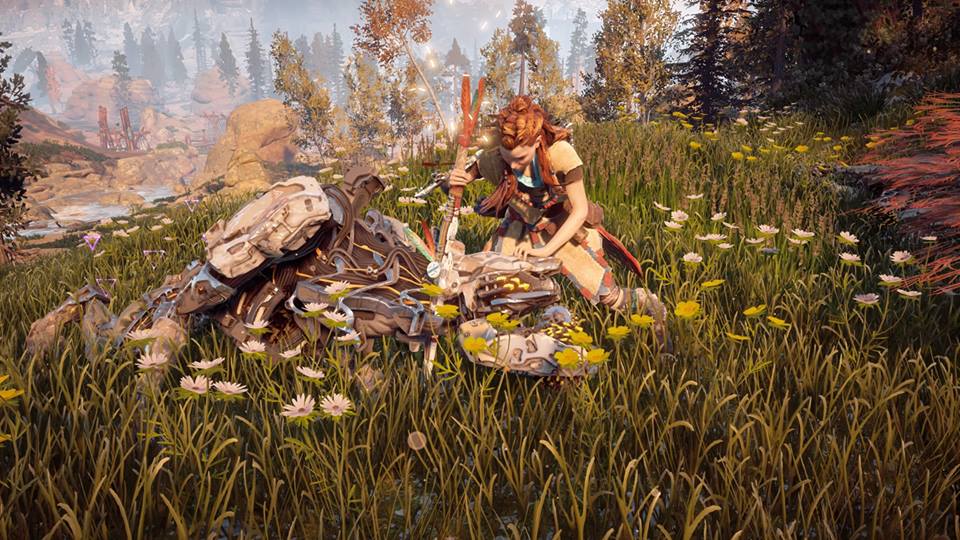 It all begins with an infant girl, exiled from her tribe for unknown reasons and given to a fellow Outcast named Rost to look after. Rost is an adult, by the way. Anyway, this child, of course, turns out to be the game’s protagonist: Aloy (pronounced Ay-loy,). There’s a mercifully brief tutorial section where you have to learn the basics as six year-old Aloy, and then MONTAGE and she’s almost 20 – having spent the skipped over 12 years or so training in order to win a right of Passage called The Proving, which will get her back into her former tribe and (hopefully) help her figure out more of her past.

This all sounds kind of whatever, I know, but it’s also set in what appears to be a post-apocalyptic world where animal-like machines roam the countryside and ruins of what was once modern society can be seen scattered about. It’s a neat backdrop, and I have to say I was pleasantly surprised by the backstory involving the catastrophe that resulted in humanity reverting back to tribal societies. Of course you can see the broad strokes of it coming form a mile away, even before you start playing. Humans made a bunch of machines, because too reliant on them, lost control, lots of death and destruction – sunrise, sunset. 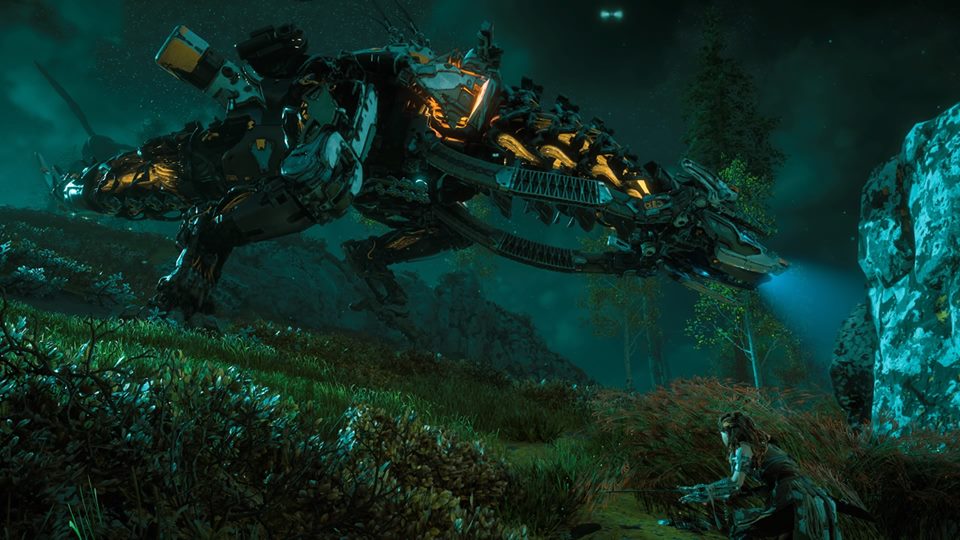 Much of this is very “been there, done that,” but it’s the more intricate details that really pulled me in. Yeah, it’s totally another tale of out of control hubris, but it’s the WHY it all went wrong and the way humanity found a way to deal with the problem that’s truly fascinating. The solution, the reason so many of the machines look like animals, heck, the reason the machines exist in the first place – all really interesting bits of the story that kept me way more invested than I ever expected.

Non-apocalypse stuff is also fairly interesting thanks to a handful of characters I actually cared about to some extent. Plus there’s how sometimes you can choose Aloy’s response to certain bits of dialog that can have small but noticeable consequences in later discussions. And I’m not entirely certain, but I think some of the side missions you complete will actually lead to slightly different tertiary details in the endgame. Nothing quite on the scale of, say, a suicide mission to a Collector base, but it’s still a really nice touch. 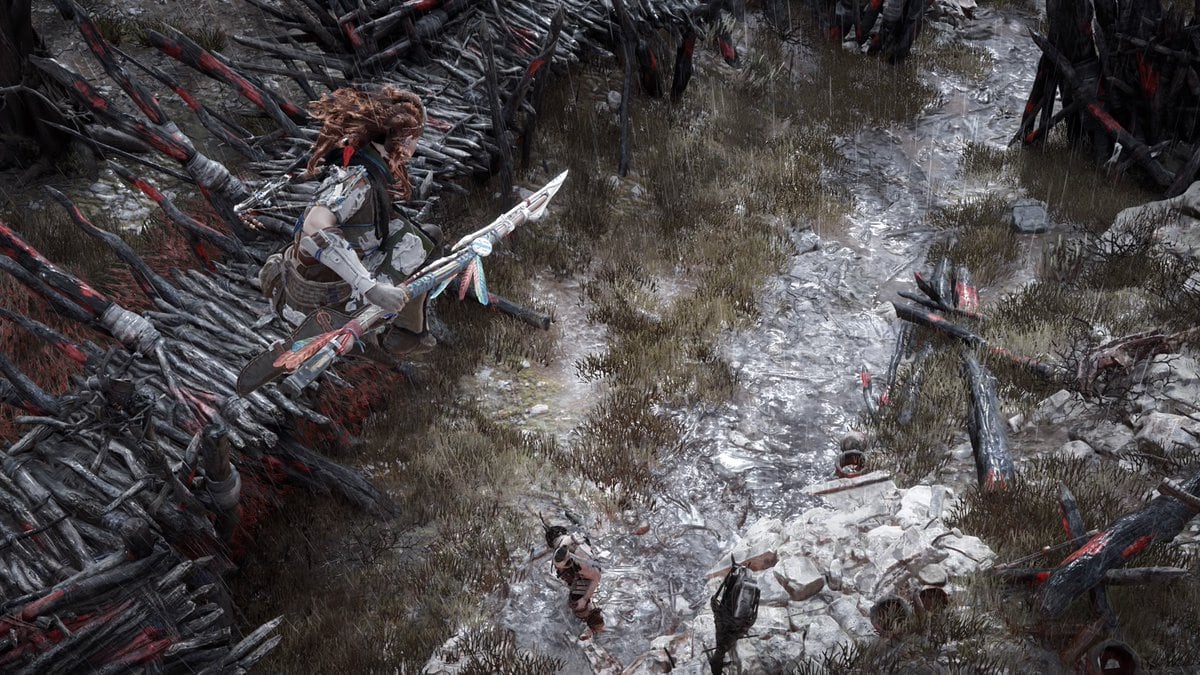 Horizon: Zero Dawn isn’t just an interesting take on a fairly rote scenario, either. It pulls from lots and lots (and LOTS) of other games, cobbling together elements similar to The Witcher and Tomb Raider and Monster Hunter and Mass Effect and Uncharted and probably a whole host of other things I haven’t been able to pinpoint yet. Rather than being a jack of all trades, master of none situation, however, Horizon: Zero Dawn actually incorporates these various ideas extremely well.

The world is open, but unlike most open world games it doesn’t feel pointlessly large or vacant. There’s quite a bit of visual variety to the map’s areas, with snowy mountains, lush forests and swamps, arid deserts, small villages, large settlements, ancient ruins, and so on. Of course it all looks amazing as well, as you can see from the screen shots taken in the Photo Mode that I’m so happy they included. Not just on a technical level, either. I adore the design of the machines; the way their eyes are color-coded to indicate when they’re idling, hunting for you, or in attack mode; the way they move (pick a situation and their animations are fantastic); the way the bigger ones will tear up the environment as they try to maul you; the way dirt and debris practically explodes off the ground as a lumbering machine is knocked over mid-charge. The costume designs are also really cool, with an obvious inspiration taken from tribal cultures throughout history but using machine parts instead of animal parts – though there are still some pelts and skulls to be seen here and there. 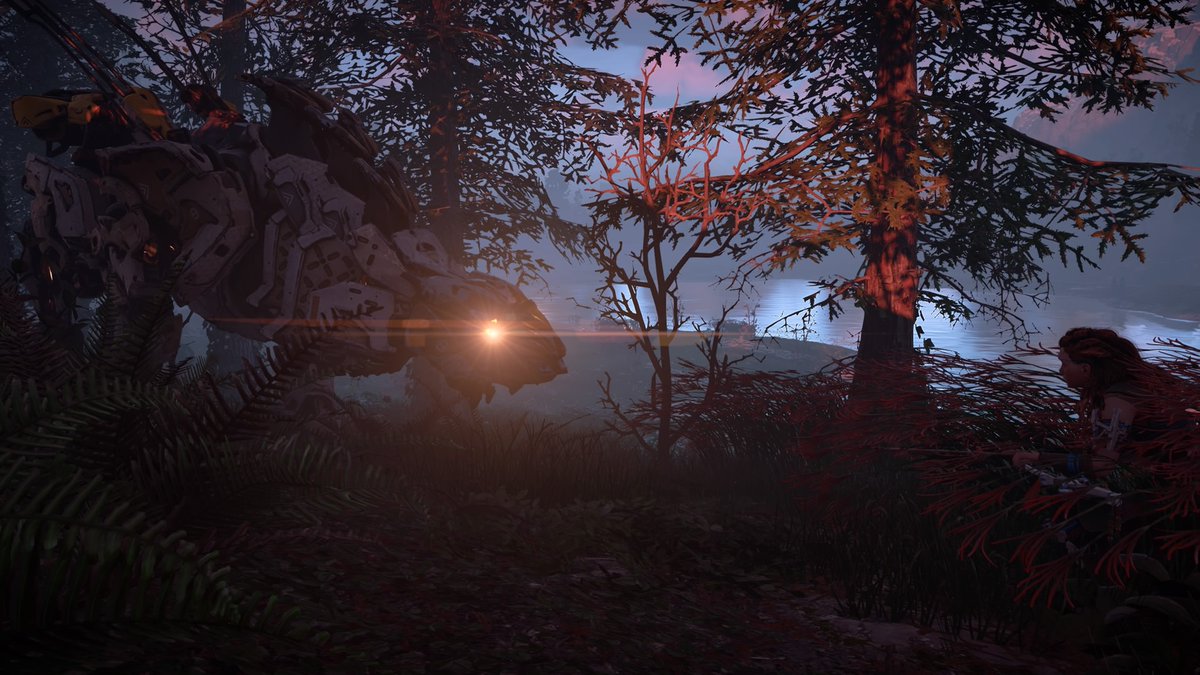 Stuff to do in this beautiful world is also plentiful. There are loads of quests to find, collectibles to locate, areas to explore, Tallnecks to climb (to reveal map information a-la Assassin’s Creed vantage point synching), and things to hunt. For the first twenty hours or so I didn’t even bother with the fast travel option because I was enjoying getting sidetracked on my way to various mission locations. Even as I neared the end at ~40 hours I didn’t use the option all that much – more just to help me finish the game faster because other games are coming out that I want to play and I didn’t want to leave Horizon: Zero Dawn unfinished.

I did encounter some “open world jank” as it were – things like bugged NPC visuals and awkward navigation around obstacles – but this was FAR less frequent than it is in most other open world games. Heck, there are other non-open world AAA games that are more buggy than this. Though I will admit that the climbing could be better. It’s sort of like Uncharted in that you find the thing you need to jump to and then the rest is mostly automatic, but sometimes the paths aren’t clear and finding the “proper” way to climb something can be bothersome as grab-able handholds will sometimes blend in with the rest of the environment. 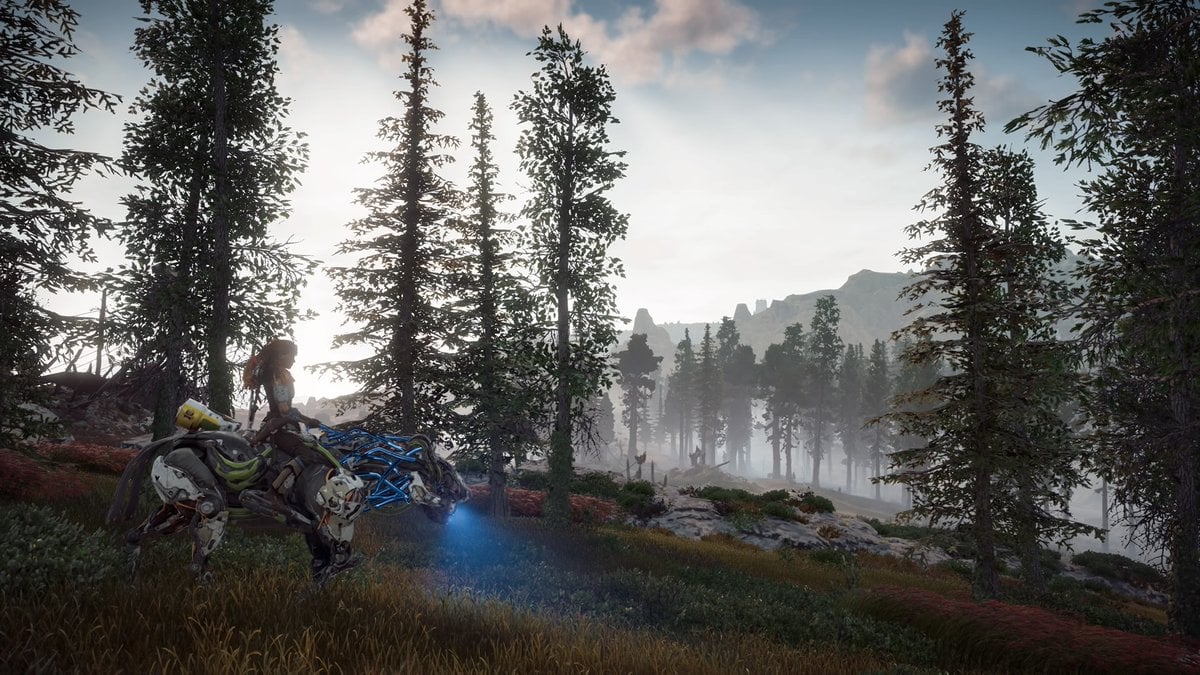 Hunting (well, combat) is where you’ll likely spend most of your time, and it feels really good. Aloy can hide behind objects and in tall grass to stay out of sight, use her Focus (a very useful piece of ancient tech found early on) to locate and mark enemies/find machine weak spots/track targets, and with the right skill upgrades silently take out quite a few threats before anyone (machine or otherwise) realizes she’s there.

It’s entirely possible to jump right in to a fight, but preparation often makes things go much more smoothly and easily. Traps can be crafted from machine parts and other gatherable resources to cause various types of elemental damage, special arrows can be crafted for different effects, tripwires can be set up, and you can lure one or more enemies using whistles and tossed rocks. Spending a few minutes preparing for a major confrontation, then watching everything play out, is extremely satisfying. 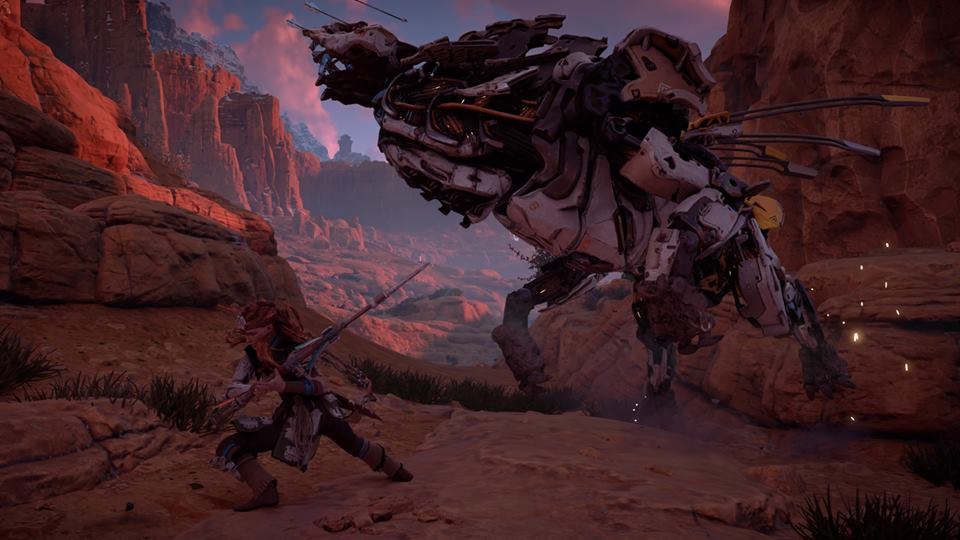 Hunting machines is easily my favorite part of Horizon: Zero Dawn, though. There’s more variety to them than I’d originally expected, plus “corrupted” versions of all of them that are a lot tougher to bring down. I love this stuff so much. Each encounter is like a puzzle. How many machines are there? What types are present? Are there any others milling around nearby that might be attracted by the noise of combat? Do you want to silently take the smaller ones out first? Will you set traps? What elements are the different machines weak against? Even the way you attack each machine makes a difference, as the bigger ones have specific components that can be destroyed to cause area-effect damage, or knocked off in order to disable certain attacks.

Horizon: Zero Dawn presents a lush and vibrant world in more ways than one. It’s gorgeous, obviously, but it’s more than just technically pretty and there’s so much to do that’s both fun and actually worth doing. I would’ve been happy with a game about hunting robot animals with a bow and arrow, but what I got was much more than that. This is a world I was happy to get lost in, and will happily get lost in again once I finish other recent releases.

Horizon: Zero Dawn Review - All of My Yes