The Broadway play An American in Paris first came onto my radar last year during a quick trip to New York. I wasn’t able to see in the big city sadly, but when I heard it was coming to Atlanta I was beyond thrilled. Despite having not seen the 1951 Academy Award-winning film that inspired the musical, I still knew this was one I would enjoy – and I wasn’t disappointed.

Tuesday date night with my boyfriend landed us at the Fox Theatre in Atlanta for this performance – which if you’re not familiar with it – is set in Paris in 1945, when the ink on the World War II surrender papers was barely dry. An American solider, Jerry Mulligan, decides to stay in Paris to rebuild his life and aid his love for the arts. He finds friendship with a few kindred souls (who all happen to have the same taste in ladies – or a certain lady to be specific), Adam Hochberg, a fellow veteran and composer, and Henri Baurel, the son of wealthy French industrialist (and a wannabe singer and dancer at heart). Each one of these males either already know our mysterious leading lady, a stunning French ballerina named Lise Dassin, or find themselves falling for her as soon as they do meet her. 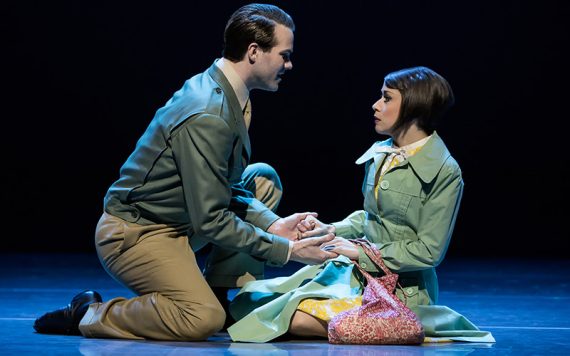 The music is just as beautiful as the story, incorporating songs from George and Ira Gershwin. The title song of course, “An American in Paris,” is a jazz-influenced orchestral piece originally composed by George Gershwin in 1928 which was inspired by the time that he had spent in the city in the 1920s. By the end of the play, the music flows perfectly – however leading up to the final scene – the evolution of this piece that we’ve all heard before takes time to grow – just as our story does. The relationship between the music and plot was well-executed and incredibly well performed. The orchestra is the real star here – however our leading actors McGee Maddox, Sara Etsy, Etai Benson, and Nick Spangler all deliver brilliant performances as well.

The set design is also worthy of mentioning. The sets literally come to life before the audiences eyes and why remaining rather simple in scope – the projections they use is simply breathtaking.

An American in Paris is playing at the Fox Theatre in Atlanta through August 20, so grab tickets while you can. It’s the perfect date night outing (follow it up with a late night drinks as Edgar’s Proof and Provision across the street- you can’t go wrong!)

An American in Paris Review

An American in Paris Review: The Perfect Date Night Musical