Entering its 18th consecutive year, the Atlanta Jewish Film Festival (AJFF) is pleased to reveal its first wave of eight films to be included in the lineup for the 2018 festival, returning for another expansive 23 days from Wednesday, January 24 through Thursday, February 15, 2018. Attracting nearly 40,000 moviegoers with a high-octane roster of more than 70 narratives and documentaries, the cinematic institution brings an assortment of films together representing more than 25 countries. Audiences can expect diverse flicks – covering everything from intimate and introspective profiles, personal narratives, stories that intersect with other communities, unconventional perspectives, and more. The full lineup and official schedule will be announced on Thursday, January 4 and tickets will go on sale via AJFF.org, beginning Wednesday, January 17. 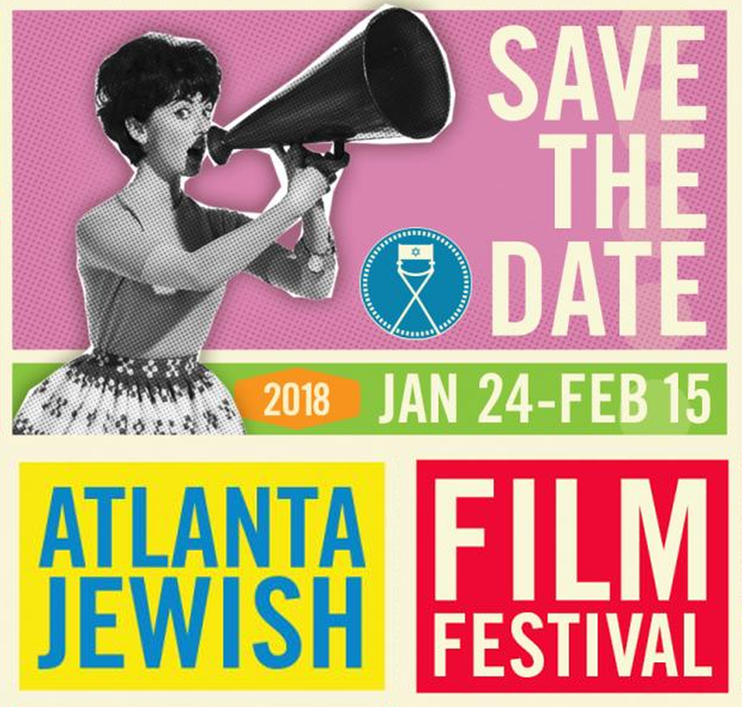 “These are not your typical Hollywood films, where many times you have a predictable ending or know the director. While we do show all genres that moviegoers come to love through commercial films, part of the delight of AJFF is the unexpected, the surprise elements, and buying into an experience and enduring this journey not knowing exactly where it will take you,” expresses Kenny Blank, executive director of Atlanta Jewish Film Festival.

The first batch of films assert an extensive selection with diverse screenings for all film gurus alike, including screenings like “Bombshell: The Hedy Lamarr Story” and “The Cakemaker,” both of which received multiple awards at previous festivals; “An Act of Defiance,” where Dutch filmmaker Jean van de Velde explores Nelson Mandela and the segregation era of South Africa; “Schindler’s List,” a 25thAnniversary Classic Film Series screening; and for the holiday season, “Dreaming of a Jewish Christmas,” a cheeky musical celebration! And in keeping with AJFF’s programming philosophy to use film to spark dialogue and discussion, screenings include discussions and plenty of chances to socialize with filmmakers, celebrity guests, community leaders, and other experts – making AJFF more than just a trip to the cinema.

Blank adds, “This experience is so different from the conventional festivals; we are diving into the subject matter of these films because, for our audience, the subject matter is just as important as the film artistry. We get into many important topics, timely issues, and current and historical events that need some unpacking and exploration, and perhaps further expertise and context. Just as often as we have filmmakers engaged in the Q&A’s, we also have academics of authors that have written on the subject who bring further perspective.”

See below for descriptions of the early wave release of films:

“The Cakemaker”
Narrative • Germany, Israel • 105 minutes
Unwittingly united in grief by a closet affair, a gay German baker and a weary Israeli widow seek mutual catharsis, in “The Cakemaker,” compassionate meditation on the human urge for connection. The emotionally distant Tomas (Tim Kalkhof) leads a lonely life as a Berlin coffee shop pastry chef, until a passionate tryst with Oren (Roy Miller), a married Israeli businessman. When his lover is killed, Tomas seeks solace in Oren’s hometown, Jerusalem, taking a job at a struggling café run by his dead lover’s unwary wife Anat (Sarah Adler). As business flourishes with Tomas’ kitchen talents, the bereaved pair forges a bond that blurs lines of nationality, religion and sexuality. Winner of the Lia Van Leer Award for Jewish heritage at the Jerusalem Film Festival and Ecumenical Jury prize at the Karlovy VaryInternational Film Festival.

“Bombshell: The Hedy Lamarr Story”
Documentary • USA • 90 minutes
Full of eye-opening surprises, “Bombshell: The Hedy Lamarr Story” goes behind the public persona of a deeply misunderstood Hollywood starlet to reveal the thwarted ambitions of a brilliant inventor. Known for her glamour and sex appeal, Hedy Lamarr rose to fame in the 1930s and ’40s. But her iconic career was largely tainted by both her own lurid offscreen exploits and screen roles that objectified her. What history had overlooked was Lamarr’s uncredited achievements in mechanics and technology. An Austrian Jewish émigré who fled her Nazi sympathizer husband, she pursued a future in show business while patenting a secret WWII communications system that is the foundation of today’s wireless technology. Hedy Lamarr narrates her trailblazing story through never-before-heard audio recordings, augmented by interviews with surviving family, friends and luminaries.

“Dreaming of a Jewish Christmas”
Documentary • Canada • 52 minutes
“Dreaming of a Jewish Christmas” is an offbeat, playful celebration of the Jewish American songwriters who composed the soundtrack to the holiday season. In an irony of ironies, it was Jewish immigrant outsiders—Irving Berlin, Mel Tormé and many others—who redefined Christmas as secular and inclusive cultural phenomenon. Penning such yuletide classics as “White Christmas,” “Let It Snow” and “Rudolph the Red-Nosed Reindeer,” these artists amplified the spirit of the holidays through musical merriment. A panoply of performers delivers signature renditions of these beloved melodies, amusingly set in a Chinese restaurant, while musicologists, religious leaders, comedians and others add insights into the strange, contradictory and poignant relationship American Jews have with “The Most Wonderful Time of the Year” (also written by a Jew).

“Heading Home: The Tale of Team Israel”
Documentary • Israel, Japan, USA, South Korea • 91 minutes
A World Premiere screening and stirring story of sports, patriotism and personal growth, “Heading Home” charts the underdog journey of Israel’s national baseball team competing for the first time in the World Baseball Classic. After years of defeat, Team Israel finally ranks among the world’s best in 2017, eligible to play in the prestigious international tournament. Their line-up included several Jewish American Major League players―Ike Davis, Josh Zeid and ex-Braves catcher Ryan Lavarnway―most with a tenuous relationship to Judaism, and never having set foot in Israel. Their odyssey takes them from Tel Aviv and Jerusalem where they are greeted as heroes, to Seoul where they must debunk their has-been, wannabe reputations. As their “Mensch on a Bench” mascot tags along, the team does much soul-searching, discovering the pride of representing Israel on the world stage.

“Bye Bye Germany”
Narrative • Germany, Luxemburg, Belgium • 98 minutes
German star Moritz Bleibtreu is a defiant Holocaust survivor looking to strike it rich in postwar Frankfurt in “Bye Bye Germany,” a brisk, polished drama tempered with bittersweet humor. Though haunted by his family’s murder at Auschwitz, hustler David Bermann (Bleibtreu) is determined to eke out a living in his battle-scarred homeland. He recruits Jewish travelling salesmen to a shady scheme, selling overpriced linens door-to-door to guilt-ridden Germans. Meantime, he faces interrogation by a comely American military intelligence officer about his past as an alleged Nazi collaborator, her impassivity no match for the charismatic jokester. With a jaunty klezmer-style score and Yiddish-inflected dialogue, this fresh historical perspective is an utterly engaging salute to European Jews who chose to tough out painful memories to reclaim their lives.

“Itzhak”
Documentary • USA, Israel • 83 minutes
An impressionist, fly-on-the-wall portrait, “Itzhak” examines the life and glorious music of Israeli-born Itzhak Perlman, widely considered the greatest living violinist. For over a year, filmmaker Alison Chernick follows the virtuoso around the world, portraying his huge passion and spirit. Wheelchair-bound from childhood polio, Perlman recounts overcoming obstacles with humor and talent, the devotion of wife Toby always shining through. Archival materials and performance clips, including a breakthrough appearance on The Ed Sullivan Show at age 13, combine with behind-the-scenes moments of the venerated artist in rehearsal, teaching classes, attending award shows, and collaborating with colleagues. Perlman’s musical discipline is contrasted with an intimate view of his home life, as a modern Jewish family embraces its heritage in a changing world.

“An Act of Defiance”
Narrative • South Africa, Netherlands • 124 minutes
A gutsy lawyer risks career and family to defend Nelson Mandela and his inner circle, in “An Act of Defiance,” a historical thriller set in South Africa’s incendiary segregation era. Mandela and nine other defendants, including Jewish anti-Apartheid fighters, faced a possible death sentence after their arrest during a summer 1963 raid. Sympathetic white Afrikaner lawyer Bram Fischer (Peter Paul Muller), defends the activists against charges of conspiracy to commit sabotage and treason. As he fights to expose South Africa’s corrupt, unjust system, Fischer attempts to hide his own ties to the resistance. This riveting drama expertly combines nail-biting political and courtroom intrigue to explore South Africa’s seminal struggle against racism, and the little-known Jewish figures who sought to end entrenched discrimination in their country.

More details will be announced closer to the festival, including selected films for Opening Night, Young Professionals Night presented by ACCESS, and Closing Night. For more information, visit AJFF.org. Stay connected via social media on Twitter, Facebook, and Instagram and use #AJFF2018.