You can tell from my title I wasn’t thrilled with Disney’s live-action Aladdin, especially if you read my review of Dumbo earlier this year. Although Aladdin did surpass my expectations, that bar was set rather low by early commercials that highlighted Will Smith’s take on the Genie. It was painful to watch for those of us that loved Robin Williams. Sure, that role would be hard for anyone to step into. But Will Smith’s take on this character isn’t the only reason that this Genie was a disaster. But let’s start at the beginning of this film and why it’s the latest Disney live-action failure.

For those of us that remember seeing the original animated Aladdin in theaters, we remember it fondly. You’ll be hard-pressed to find a Disney fan that doesn’t list Aladdin among their favorite Disney films. It was merely “one jump ahead” for so many of us. It had loveable characters, hauntingly perfect songs from Disney’s king of composers, Alan Menken, and a story that empowered audiences to strive for more – yet remain good at heart.

So tackling a remake of a beloved film such as this one, has to be done carefully. You have to keep the moments that the original fans loved in tack. You have to pay homage to the nostalgia that we all want to feel going to see this film (and taking a new generation to see it). And this doesn’t even take into account the MASSIVE effect that Robin Williams had on audiences when he lent his voice to the larger than life character of the Genie in the 1992 film. He WAS the Genie. His personality and humor created a character that would live on in the hearts of fans for decades to come. And having to tackle that with a remake – well that was no easy task for director Guy Richie or Will Smith. I want to be clear that I recognize this being an impossible task before I continue. 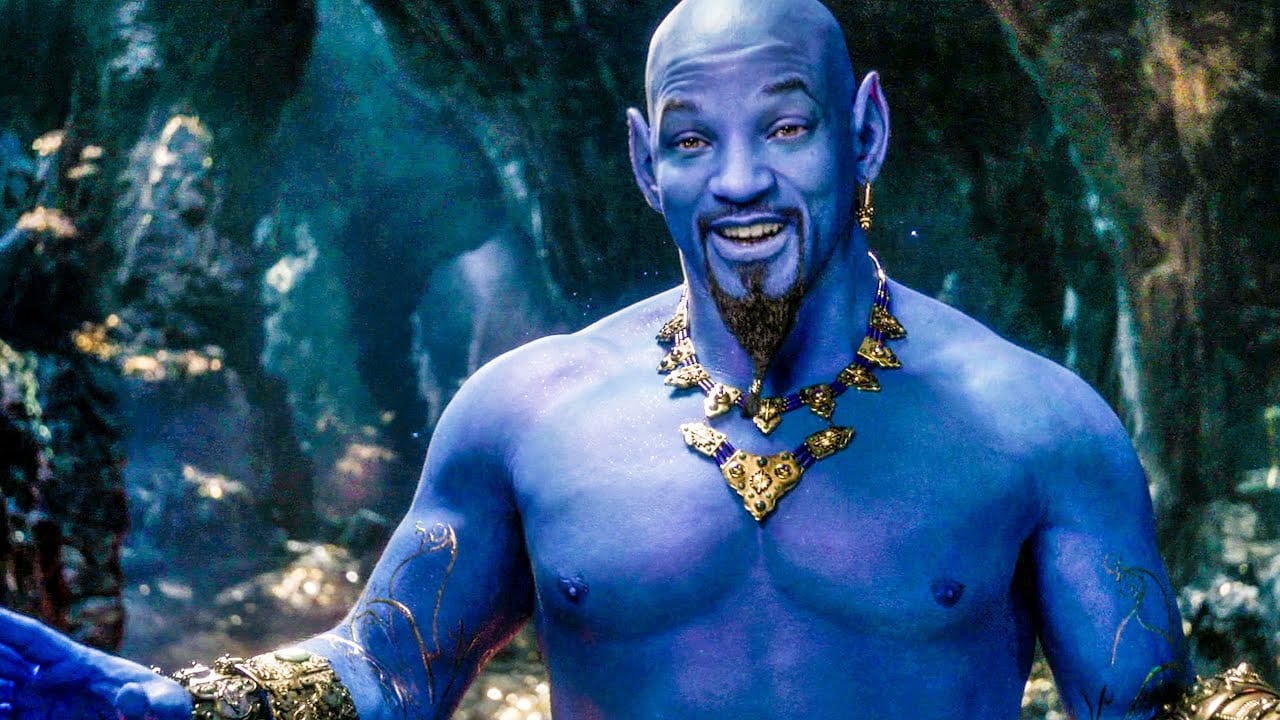 There’s a very distinct Fresh Prince of Bel-Air vibe to not only the Genie but to everything the Genie does – especially his singing. We don’t need the perfect songs of Aladdin remixed by Will Smith – nor do we need the absolutely horrid and weird auto-tuning that accompanies each of these songs.

While I appreciate the 90’s reference to Fresh Prince that we get in the film – and in the trailer (1:15 in), the references need to stop there if we’re going to celebrate the original film properly. They made the joke. We laughed. It was great, and let’s move on. Let’s NOT keep that vibe going for the next 1.5 hours of the film.

There was an opportunity with this live-action take of Aladdin to do something really cool. They could have taken a Broadway and Bollywood approach with the film – introducing audiences to a different style of cinema while leaning on new-ish songs from the currently running, and incredibly successful Broadway musical. Songs like “Proud of Your Boy” from the play are effortlessly beautiful (and have ties back to the original – as the song by Howard Ashman and Alan Menken was cut from the 1992 film). The emotion in that song would deeply resonate with fans. And the fact that it came from the original movie – you’re bringing something new to fans – but you’re still playing into the nostalgia. See for yourself.

The version that ended up in the Broadway musical (slightly different than the above) could have been used in this film. It would have been the perfect fit. But I digress. Let me focus on what DID happen in this movie…

The new song we get is called “Speechless,” and Jasmine sings it… Because Disney needed to have a Me-Too moment and doesn’t know how to do it without pandering to their audiences.

I’m all about female empowerment. But you don’t empower this way. Furthermore, the way the film ends also involves a pretty modern take on the classic that drives home even more pandering. We don’t need to rewrite classics to show that we’re aware of gender issues. And we don’t need to add songs in that don’t quite fit in a film or a story to show that women shouldn’t be silent about the issues they’re passionate about. We just need to continue having the conversation. And we don’t need films like this to unsuccessfully try to have that conversation for us. I could keep going here, but I won’t. You get the point.

Aladdin Review: What I Liked

So I’ve been reasonably critical here with what I didn’t like about the film. What did I like? I adored Abu and even more so the Magic Carpet. Both of these characters create a strong emotional bond with audiences from the very first scenes that they’re in. There’s one scene that happens rather early in the film that will have you smiling and laughing for days after you leave the theater. It involves the Magic Carpet playing in the sand. That’s all I’ll say. Look closely for it, as it does happen in the background of a moment between Aladdin and the Genie.

The film is also quite beautiful. The rich and vibrant color palette creates a visual playground that’s cinematically beautiful and lovely to watch for the rather long runtime of 2 hours and 8 minutes (which honestly feels more like 2.5 hours).

I’m still undecided on my feelings of Guy Richie’s style here in regards to the speed of the film. Certain slow-motion sequences and other scenes that play through at a reasonable rate, speed up for a second, and then return to normal speed only to speed up again, create a weird interpretation for the mind. It makes you want to hit pause and take a closer look. Are these characters being played by humans or CGI-characters? The movement feels fake. And It doesn’t add anything to the film. It just feels off.

Disney, overall, I’m “speechless.” I didn’t hate Aladdin. But it could have been so, so much better than what fans are going to see this weekend.

'Aladdin' Review: Well... It Was Better Than 'Dumbo'