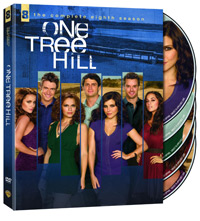 One Tree Hill Season 8 is out on DVD and in addition to the 22 episodes – the set also has over 2 hours of bonus features! The extras include 3 all-new featurettes, two full-length commentaries, deleted scenes and a hilarious gag reel!

In promotion of the Season 8 DVD release, we wanted to ask fans what special features from the new release are you most looking forward to checking out? Sound off in our comment section below and let us know your thoughts!

For us, we’re most looking forward to the gag reel. We love seeing our the cast goof around on set! Any sort of the behind-the-scenes stuff is awesome for us fans to check out, because it helps to give us a better understanding of the show’s dynamics. Do you guys feel the same way?

We’re also looking forward to the deleted scenes and really everything else that we haven’t seen before! 🙂

And just because we want to include a little One Tree Hill video love… Here’s one of the most dramatic and scary moments from the 8th season (in our opinion)!

For fans of One Tree Hill, the Eighth Season will definitely be one to own! Includes all 22 episodes on 5 discs plus all-new featurettes, commentaries, deleted scenes and gag reel http://bit.ly/w2DhRu!

Don’t miss the premiere of Season 9 of One Tree Hill next Wednesday the 11th at 8/7 central on The CW!

——————
Disclaimer: I have been hired by Warner Bros. WBWord division to promote One Tree Hill Season Eight on DVD.