You may already be familiar with the series Outlander that airs on the Starz network, but if you are not, here is a (very) brief synopsis of the series. After the end of World War 2, Claire, who worked as a nurse during the war, is on a trip with her husband in Scotland. Through a series of events, she gets transported through ancient ruins to Scotland in 1743. While there, she falls in love with a Scottish Highlander named Jamie Fraser. She returns to the 1940s still very much in love with Jamie but lives her life with her husband until he passes away. She then goes back through time to find Jamie and live their lives together in the past.

It sounds complicated and maybe a little “outlandish” (intentional play on words), but actually, the series (which is based on a book series) does an incredible job of making these events and characters feel plausible and realistic. Claire herself is a very skeptical person, and we are right there with her. In the previous seasons, a lot has happened, but to save time and not give away too many plot details for those just finding the series, Jamie and Claire are now in the United States (actually not the United States yet) in North Carolina under British rule in the years leading up to the revolutionary war.

Back at their home on Fraser’s Ridge, Jamie is tasked by Governor Tryon to hunt down and kill Murtagh (who Jamie has actually been hiding). Claire continues to use her medical knowledge to protect others. She tries to keep her family together now that it is back together, but in doing so, she neglects her own safety.

Brianna and Roger get married, but the ghost of Steven Bonnet is always there and shows up surprisingly, and Brianna is forced to deal with it herself. Roger, while trying to warn Murtagh runs into his own near-death experience and experiences post-traumatic stress disorder, and Jamie is also devastated after the events.

And finally, Young Ian comes back from his time amongst the Mohawk and learns the truth about Claire, Brianna, and Roger’s origins and confronts them about it. Claire gets kidnapped, and Jamie and Roger must save her, and we end the season with a moment of peace before facing the repercussions of saving Claire.

It would be hard to give this release anything but positive reviews. The acting is top-notch with a strong performance from the cast. Not only the leads, but even minor roles are powerful as well. This is part of what makes the story so believable. The characters are complex and in no way one dimensional. The production value is superb. The sets are unique and have a real authenticity to their time and place. Noting feels artificial about the 1770’s settings, and the same can be said about the costuming. Everything comes together to make a robust and believable story.

Perhaps what is so great about this series is that it has appeal to such a broad fanbase. There’s a love story between Jamie and Claire (and Brianna and Roger) that speaks to romance fans. There’s plenty of action and adventure for those that seek that aspect – it can be a pretty gruesome show at times in its illustration of battles and fighting. And as historical fiction, it does an accurate job presenting the happenings of the time it is set in. It even had medical mysteries for those into that genre, as Claire had to use her modern knowledge of medicine to solve problems with the tools she had at the time. There truly is something for everybody.

As far as the Blu-ray itself, I am delighted with the way it is presented. In 1.78:1 1080p High Definition, the image is as crisp and clear as one could possibly expect. The blacks are inky but not overwhelming. The colors are sharp and vibrant, and the skin tones are realistic. The focus balance between background and foreground is clear, with viewers being able to take in the full screen. The sound is also superb (English, French 5.1 Dolby Digital) with a beautiful balance. The dialogue, special effects, and action sequences all balance out well without one drowning out the others (except where it is done so intentionally to show a person’s perspective).

In addition to the standard Blu-ray release, there is a Collector’s edition that has the following additional features:

Overall, this release is a wonderful addition to the collection, and I highly recommend it. If you are new to Outlander, the previous seasons are also available from Sony on Blu-ray and DVD, and you can also stream them with Starz on-demand. I personally go for the home media myself because I am a sucker for extras.

Outlander is available on DVD and Blu-ray right now from Sony Pictures Home Entertainment. For more information, check out https://twitter.com/Outlanderclctr 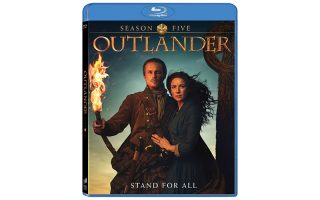 Want to enter to win a copy of the Outlander Season 5 Blu-Ray DVD? Follow the steps below!

We’ll announce a winner on 9/28 – Check back here (and check your inbox) to see if you’ve won! Good Luck!