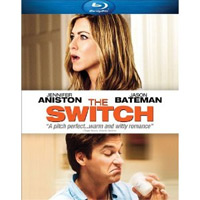 The Switch instantly had me intrigued when I saw the cast. Jennifer Aniston, Jason Bateman, Patrick Wilson, Juliette Lewis, and (one of my personal favorites) Jeff Goldblum all star in a comedy about friendship… and love. While the film is a little predictable – the journey to the overly obvious ending isn’t as easy to call as you might think.

Jennifer Aniston stars as Kassie, the best friend to Wally (Jason Bateman). Kassie isn’t exactly happy with the lackluster romances that life has provided her with so far, and she’s tired of waiting to move forward with her life. She knows what she wants, and she doesn’t need a man to have it. Sort of. She wants to have a baby, even though it means doing so by herself. After ignoring Wally’s input, and picking a sperm donor (Patrick Wilson), Kassie finds herself throwing a rather interesting party… which will climax with her inseminating herself. Only Wally has way WAY too much to drink… and hijinks ensue. Kassie finds herself pregnant soon after the party, and decides to move away to raise her son, Sebastian. Fast forward 7 years, and Kassie and Sebastian are back. Wally now has a chance to get acquainted with an adorable and rather unusual child.

You can probably see where this description is going can’t you? I’ll leave you there, so you can discover it for yourself.

The real star of this movie in my opinion was the adorable little boy who played Sebastian (Thomas Robinson). There was something about this kid that made him seem decades older than six (as he played in the film) – possibly the fact that his character was a full blown hypochondriac… Not a typical six year old.

Again, Jeff Goldblum is awesome – though not given nearly enough scenes. Jennifer Aniston brings her scary perfect comedic timing to her lines as usual and Michael Bluth… I mean Jason Bateman continues to portray a slightly depressed guy with a dry sarcastic sense of humor. Does anyone else want to see him in a movie where he has to be ridiculously happy and not satirical in nature at all? Don’t get me wrong, I absolutely love him – he was a staple of Arrested Development – I just feel that for the most part he plays the same character over and over again.

Overall, it’s a cute, but predictable movie. Still a great flick for a date night in though. Special features include deleted scenes, an alternate ending, a behind-the-scenes featurette, and a number of bloopers. The extras are definitely worth checking out if you pick up the DVD.

Jane Eyre Review: Creepy, Out Of Order... Yet Romantic

'Fringe' Episode 3.17 Review: Death and All Her Friends

'Charlie Sheen: On The Brink' Airs this Sunday