‘Once Upon A Time’ 2.6 Review And Recap: Tallahassee 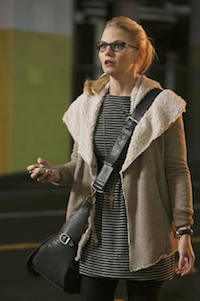 This week’s Once Upon A Time was brought to you by Jennifer Morrison’s flawlessness. Yup, this episode was pretty much entirely centered around Emma, and we got a special treat! An inside look at her past! We finally got a glimpse of her relationship with her baby daddy, and why she doesn’t like to talk about him that much. To top that off, we also get some epic Hook (Colin O’Donoghue) and Emma action. It’s official: I ship Swan Hook.

Emma/Hook and the Beanstalk! All Swan Hook really did was have amazing chemistry, knockout Jorge Garcia, have more amazing chemistry, and search for a compass. Sadly, it was wrapped around the giant’s (Jorge Garcia) neck. Emma couldn’t retrieve it before a ton of rocks trapped Hook. Thankfully, she managed to leave safely. During this portion of the episode, we got to see a bit of Emma’s trust issues. Yes, Hook is a man to never be trusted, but come on! Those eyes! Yet, Emma wasn’t having any of it, and left him. I have a feeling that he’ll be back soon, and he won’t be happy. Boo. I was hoping for more Swan Hook action.

While Emma and Hook retrieved the compass, Snow (Ginnifer Goodwin) and Mulan (Jamie Chung) looked after the beanstalk and Aurora (Sarah Bolger). Finally, her character’s getting a tad bit interesting and less annoying! She reveals that she has been having extremely creepy dreams. Ones of which include a red room with curtains on fire, and a set of male eyes in the corner. If that visual wasn’t terrifying enough, we later realize that Henry had the same exact dream, but with female eyes! I’m guessing that Snow and Emma just found a way to communicate to the other world. I wonder where this story will take us…

It all started with a stolen car being stolen… It’s time to officially meet Henry’s (Jared Gilmore) father! Mr. Neil Cassidy (Michael Raymond-James). Like most love stories, they fall in love to the point where they would do most anything to protect each other. Well, they’re both pretty hard-core thieves. They both thought that they could settle down in Tallahassee and have a life without stealing to provide for themselves, but it all quickly messed up majorly because of a box. In order to protect Neil, Emma decides to steal a few watches for him. Just as they’re about to get away with it, Neil comes face-to-face with August AKA Pinocchio (Eion Bailey)! He convinces Neil to let Emma go in order for her to face her destiny in a few years. Neil was skeptical at first, but ultimately agreed after August showed him something pretty spectacular in a box. Whatever was in there, automatically made Neil believe in magic, but the question is, what was in it? And why didn’t August show Emma the box when she was so skeptical of magic?

I really enjoyed this episode! It wasn’t my favorite of the season, and I kind of lost interest during the slow moments, but overall, I liked it! Plus, Jorge Garcia was literally perfect. He had about ten lines, two being “ARGHHHH!” Yet, he made me feel for him, and want to give him a massive hug.

Once Upon A Time 2.6 ‘Tallahassee’ Fan Questions:

Littlebigplanet Vita Review: Destined To Be The Vita Game Of The Year