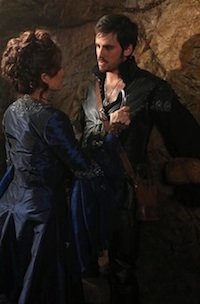 It’s back! After two agonizing weeks of waiting, we finally get a new episode of Once Upon A Time that surely left us with our jaws on the floor! After the epic twist that broke the heart’s of shippers everywhere, we are left with only one more episode before we are thrown into hiatus until January. Between Charming (Josh Dallas) being stuck in a cursed sleep, Aurora (Sarah Bolger) having her heart in the hands of Cora (Barbara Hershey), and our heroines still stuck in the Enchanted Forest, there’s no telling how the winter finale could go!

As I expected, Hook (Colin O’Donoghue) is still determined to get to Storybrooke. He tried to get back into Cora’s good graces, but that didn’t work out so well. Instead, Cora takes it upon herself to try to steal the magical compass from Snow (Ginnifer Goodwin), Emma (Jennifer Morrison), Mulan (Jamie Chung), and Aurora. Meanwhile, Aurora embraces her creepy dream situation, and actually tries to be useful, instead of a brat. She willingly enters the dreamstate to receive a message from Henry (Jared Gilmore), but unfortunately gets sucked out before she is able to. If that’s not bad enough, she also gets captured by Cora in the process. This prompts Snow to lower her defenses, and go to the cursed in-between dream place (Not really sure what to call it, bear with me!) in hopes of finding a solution to save Aurora without giving up the compass. Plot twist, it is later revealed that Hook set Aurora free, but without her heart… Now Cora has control over Aurora, and only she and Hook know. Ooh. Aurora’s future is not looking bright!

It’s time for our favorite people to come together! After Henry delivers the message about Cora trying to come over to Storybrooke, Regina (Lana Parrilla) has no choice but to ask Mr. Gold (Robert Carlyle) for help! He, after much convincing, agrees. They send Henry to relay a message back to Aurora, but that ultimately fails… And after seeing the damage the cursed dream world caused Henry, Charming takes it upon himself to be the new messenger, after piecing together that Snow would most likely be there. He willingly falls into a cursed sleep, faith being his only hope of ever waking up!

After Aurora is captured, and Henry is hurt… There is only one other way to send messages between the two worlds… Through Snow and Charming, of course! Viewers have been waiting weeks for Snow and Charming’s reunion, and to be honest, we didn’t expect it to be like this! In a creepy dream room, engulfed with flames… Wow. Nonetheless, they were reunited and the life saving message was finally delivered. Yet, it isn’t like Once Upon A Time to simply have a ‘happily ever after.’ Sadly, Charming’s plan to wake up by true love’s kiss failed, and now he is stuck in a horrible cursed sleep. How long will he have to wait for Snow to find him?

This episode was just alright to me. To be honest, I wasn’t really interested until Charming put his life at stake, and inevitably reunited with Snow (kind of). I hate to say it, but Aurora and Henry are not that interesting, in my opinion. Though, now that Aurora is being controlled by Cora, she just became that much more dynamic. Even though this wasn’t by any means my favorite episode, it was still a home-run in the end. With next week being the winter finale, there is honestly no telling what could happen.

Sine Mora Vita Review: A Great And Beautiful Addition To The PlayStation Vita