One Piece: Unlimited World Red is the newest game based on the highly popular One Piece series. Originally starting as a Japanese manga and later getting adapted into an animated show, the series has received numerous video game iterations of various types across numerous platforms. One Piece: Unlimited World Red originally launched in Japan on the 3DS last year, but eventually ports to other systems and an international release were announced. Now the game is available to players in the States and Europe on the PlayStation 3, PlayStation Vita, and Nintendo Wii U as well as the original platform, the Nintendo 3DS. 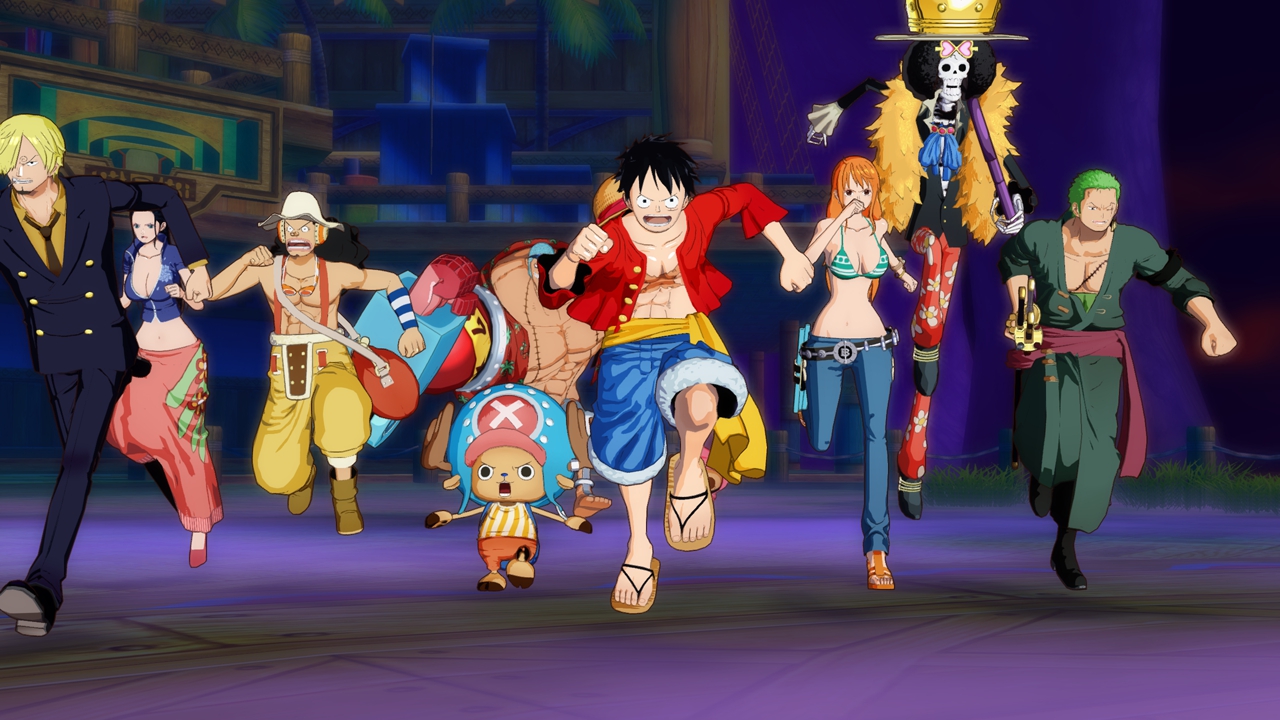 Unlimited World Red is an adventure game where you take control of Monkey D. Luffy and his pirate crew. The Straw Hat Pirates end up visiting various locations from the series to fight enemies and obtain resources to help build up Transtown, which serves as your base of operations for the game. The story starts with the gang bringing a tanooki by the name of Pato to meet up with someone in Transtown, when suddenly most of the Straw Hats end up getting abducted shortly after arriving. Luffy goes to find the rest of his crew early on, giving players the ability to choose from any of the nine pirates to use for most of the Main Story mode. After regrouping, the gang goes on to look into what caused the abductions, as well as why the locations they’re traveling to are all places they’ve been to before.

While exploring areas, players can earn numerous resources from harvesting them from various plants/trees and crates, fishing or catching bugs and creatures, or as item drops from defeating enemies in combat. In combat players will perform combos by using the two main attack buttons in various sequences, or pay some SP to use a powerful Special Attack or team-based Link Attack. Some characters can also pay SP to use other special traits, such as Sanji cooking to restore some health and SP, Chopper creating a remedy to heal and remove status ailments, or Zoro initiating his Aggro mode to boost damage output and attack speed. As you fight the game will prompt you with several instances to press a button to either dodge, block, deflect, or counter enemy attacks. These are very helpful in keeping yourself alive during battles, especially boss fights, so it’s best to take advantage of them as they appear. When fighting enemies, a list of several combos will be displayed on the side of the screen for players to execute. If the player hits enemies with all of these combos without getting knocked down they will enter the powerful Break Rush state, which grants additional attack power to all of your moves for a brief period of time. In addition to all of this, you can equip Strong Words onto the characters which grant stat buffs, give elemental damage properties to your attacks, and other things for a brief period of time. None of the members of the Straw Hat Crew are a slouch in combat by any means, and all are fun to use.

Most of the Main Story lets you choose any three of the nine playable characters to bring with you. Mixing your team up from time to time is important, since some members’ powers allow you to explore new locations or get more loot and resources. For example, Zoro can cut down some walls, Luffy can use his Gum Gum Rocket power to grab onto hooks and ledges, and Chopper can dig in certain patches of dirt, among other things. Each character plays pretty different from the rest, and it’s fun to experiment with them to see which ones you’ll want to bring along, for either combat or for those actions outside of fights as mentioned. When using the fishing rod or insect net outside of combat, players are put up to a small timing-based minigame to successfully catch the creatures, insects, or fish. At first your net and rod can only catch smaller animals and bugs (anything too big at first will just be too difficult due to having too much health), but upgrading the rod and net as the game advances will gradually make it possible to catch more and more. 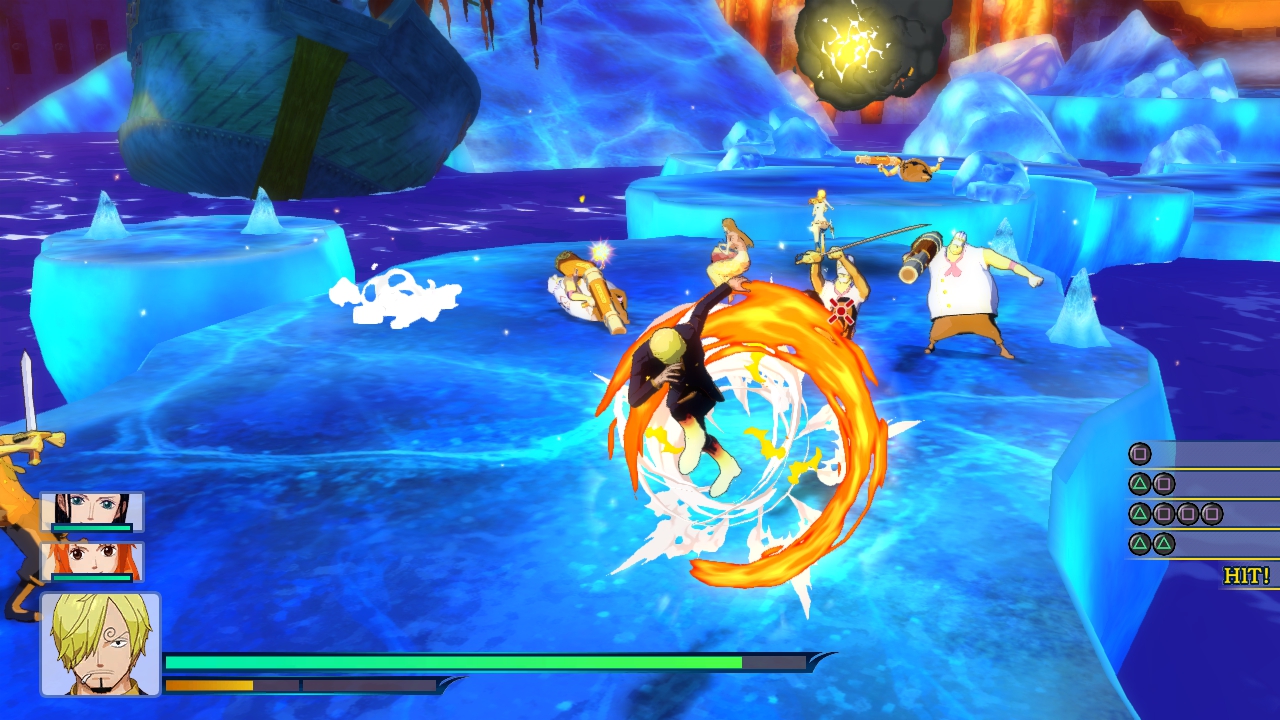 When you’re done with missions to either advance the plot or one of the game’s many sidequests, one of the things you’ll find yourself doing in the Main Story mode is using these resources and creatures you find on your adventures to expand Transtown. When you start the game it’s rather small with little to do, but as players progress it’s encouraged to build more into the town. Building the Tavern grants the ability to start doing sidequests, the Factory allows upgrading for your fishing rod and bug-catching net and buying/crafting additional resources, the Pharmacy makes it possible to purchase healing items or craft them with resources, a restaurant lets you buy and craft food to boost your characters’ stats, among many other places to build. When you’re given the option to buy or craft things from these places, it’s important to note that some items, usually the higher end ones, can only be crafted. This makes management of your resources pretty important. If you’re running low on resources there’s always the option to return to previously visited areas just to harvest resources and animals at your own pace without a mission objective getting in your way. After upgrading your town enough you’ll be able to play several minigames, some of which are enjoyable little diversions. Unfortunately, the actual plot in the Main Story is a bit on the short side. That said, there is a a large amount of sidequests to keep players engaged both during and after the final bossfight, giving players incentive to keep coming back. Beating the Main Story also grants access to the Difficult Main Story, which functions as New Game + mode. However, the Main Story mode is essentially only half of the package in this release.

Added into the game for this new release is the Battle Coliseum mode. The plot here focuses on Luffy and rival pirate Trafalgar Law working together to advance in ranks through Donflamingo Donquixote’s coliseum in an attempt to take him down. Players can advance through the ranks in a multitude of different battle types. Scramble matches have you picking two characters to fight hordes of common enemies, Duel matches are 1 on 1 fights against a boss (boss fights here draw from Main Story bosses as well as other playable characters in this mode), Battle Royale mixes a combination of small hordes and/or bosses, and Boss Rush pits you against several boss fights consecutively. There’s also a greater variety of playable characters in this mode compared to the Main Story mode. Characters who normally aren’t playable or don’t even appear in the Main Story can be used here in the Battle Coliseum. This allows the use of characters like Trafalgar Law, Crocodile, Boa Hancock, and many others for players to fight and discover. This mode mostly functions independently of the Main Story, so no need to worry if some of your crew is underleveled in the standard game. Levels, stats, and Strong Word customization from the Main Story don’t even apply here, as every character is on an even playing field with their own preset Strong Word selections to use. However, through meeting specific conditions you can unlock resources and sidequests to take advantage of in the Main Story mode here, most of these unlockable sidequests have you using some of these extra characters. This gives a somewhat symbiotic relationship with the Battle Coliseum and the Main Story, where playing in the Coliseum enough grants new experiences in the Main Story, and using these additional characters in the new sidequests should be a little easier due to using them prior in the Coliseum. 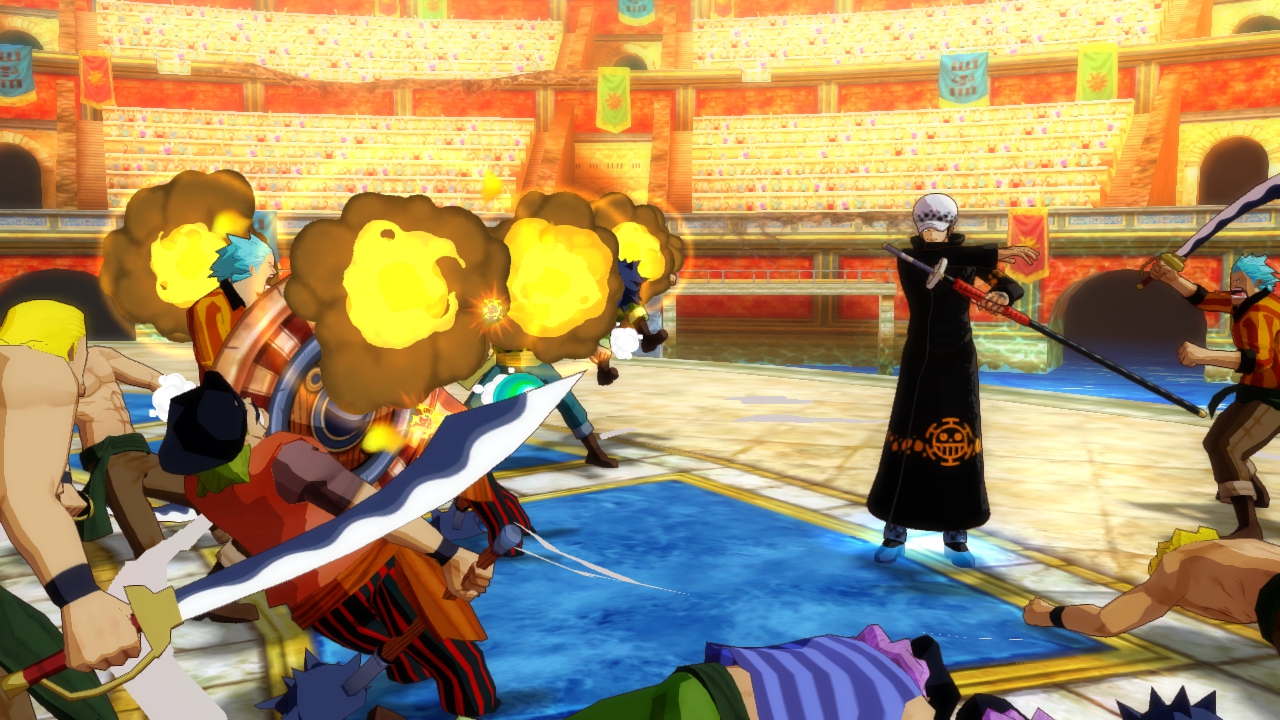 While I mainly played on the PlayStation 3 version of the game for this review, I have gotten to play the PlayStation Vita version as well for comparison’s sake. While neither handheld nor console contains online multiplayer, there is one main difference in local multiplayer between the two. Handheld gamers can play in groups of up to four players, while console owners can only play with a maximum of two people. The Vita version also utilizes Near to exchange wanted posters, which allows for easier collection of character coins to use on the game’s scratch-off cards. The Vita version also has some slight framerate drops when there’s enough intensive action going on the screen at once, and while it’s not bad enough to bring the game to a crawl it is definitely noticeable. Character intro animations in Battle Coliseum also have slightly modified framerate performance in the Vita version. In addition, Cross Save support is available for the game so you can keep your progress at home or on the go.

One Piece Unlimited World Red is overall a very fun game. Exploring the various areas, fishing and bug-catching, and combat are all enjoyable experiences. However the story is pretty short, and the lack of online multiplayer is a bit unfortunate. Being able to team up with friends online to hunt for animals and resources as well as fight tough enemies together could have been an interesting addition to go alongside with the local multiplayer support. That said, the new game +, sidequests, and the Battle Coliseum should keep players coming back for more even after the credits roll for the first time.