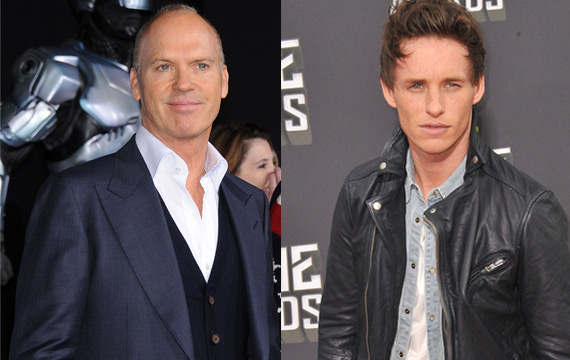 Michael Keaton, Timothy Spall and Eddie Redmayne have emerged as early favorites for the coveted Best Actor prize at next year’s Oscars.

As movie critics sharpen their pencils to vote for the year’s top film performances, it seems the 2015 Best Actor race will be one of the most fiercely fought.

Spall has been the top man since he won gold at Cannes for his lead role in biopic Mr. Turner, but now the Los Angeles Times has earmarked Keaton for the trophy, thanks to his role in Birdman, and The Hollywood Reporter is confident Redmayne’s turn as Stephen Hawking in The Theory of Everything will make him an Oscars season favorite.

The Hollywood Reporter recently honored Redmayne and his co-stars Felicity Jones and James Marsh with a Breakthrough in Film award at the Toronto International Film Festival in Canada and editors called the star’s performance “landmark”.

Meanwhile, top critics have given Keaton the edge in the first serious odds list on awards season go-to website GoldDerby.com.

Keaton is a 13/5 favorite, ahead of Steve Carell in Foxcatcher and Redmayne, while Spall and fellow Brit Benedict Cumberbatch (The Imitation Game) also make the early top five.