This was my third year attending Syfy’s Digital Press Tour. Though I hadn’t been to one since 2011, it felt like it was just yesterday. Probably because I saw most of the attendees just a few months ago at San Diego Comic-Con.

Everything got underway on Sunday evening. We met up for cocktails around 6:30 over in Universal CityWalk at Antojitos. I caught up with press friends and then grabbed a bite to eat before whisking off to Cabana Bay for an evening of bowling, drinks and desert.

Cast members from Syfy’s upcoming Ascension joined us for bowling. We quickly bonded with our new teammate, Brandon Bell, who I think will always jokingly refer to me as the bowling champion… Bowling was a bit of a disaster on my end. I scored a 31…. And in the second round only slightly redeemed myself with a 61. 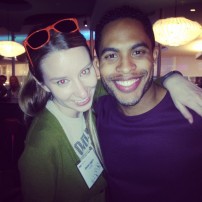 It was great evening unwinding with old friends and making new ones.

The next morning started early. Breakfast at 8:15am – then we dived right into the press junkets.

First up we had a panel with Syfy’s executives, who talked to us a bit about the direction the network is going in – putting more of a focus on original scripted sci-fi programming. They have 6 new – and pretty major – series that are premiering over the next year. It’s a pretty ambitious slate, and they’re fully aware of it. 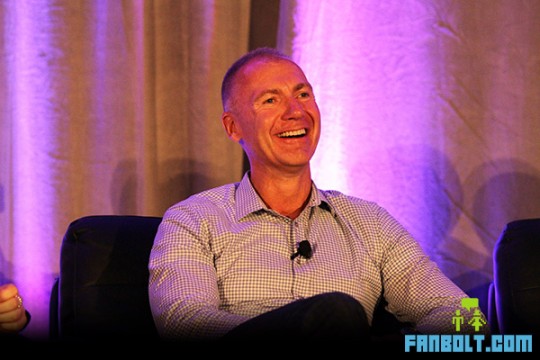 The opening panel did bring us some sad news as well. Sharknado was supposed to be the last panel of the day, but they couldn’t get the panelists there so we were going to be wrapping the day early.

They did break some news on the upcoming Sharknado 3 though, it will be taking place on the east coast (or Feast Coast – as this will be the title) – starting out in DC and ending in Orlando. One can only imagine how things will end in Orlando with all theme parks the city has to offer…

Next on the agenda was 12 Monkeys, a bold new series based off the film. While a lot of us may have our reservations about a series being created from the film – I would argue that I felt the same way with FX’s Fargo, and that turned out to be one of the best new series in 2014. I absolutely loved it.

But back to 12 Monkeys, we had Aaron Stanford, Amanda Schull and Co-Executive Producer Travis Fickett with us.

I think fans will be please with what we took and what we changed from the film. – Travis Fickett

“Our technical advisor for @Helix is actually working on one of the #Ebola teams right now.” – Steven Maeda

Aaron Ashmore joined the panel for Killjoys one of Syfy’s upcoming projects I’m most excited about.

Why does anyone want to do anything other than #scifi? – Aaron Ashmore

Town of the Living Dead

“Town of the Living Dead didn’t affect the making the film. We just had more people watching us.” Tina Teeter

We broke for lunch with Face Off’s Mckenzie Westmore.

Ascension is probably the project I’m most excited for with Syfy. It’s based off Project Orion, a project that actually existed under the administration of President John F. Kennedy.

The mini-series (Or as I’m calling it 6-hour pilot) is set to premiere on December 15, 2014, and air for three nights – two episodes each night. If it does well, we could see a series being born from this – similar to Battlestar Galactica. 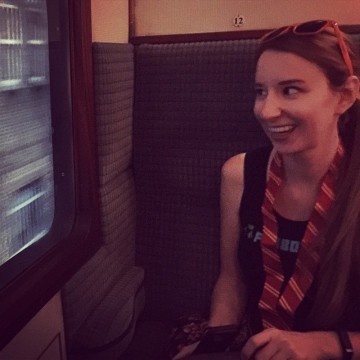 We wrapped interviews up a little before 3pm, so we had a few hours of downtime before we headed off for dinner. I grabbed a drink poolside with a few friends, and then we made our way to the buses to be transported to Universal Studios.

We arrived at Islands of Adventure and immediately hopped aboard the Hogswart Express to Universal Studios’ Diagon Alley. I was completely enchanted by the train ride. As a fan of Harry Potter, I felt like a little kid on Christmas morning – my senses in overload as the environments from the movie pulled me in. Our arrival in Diagon Alley was more of the same. I was just dumbstruck with awe. It’s absolutely incredible how you truly feel transported into the world of Harry Potter. 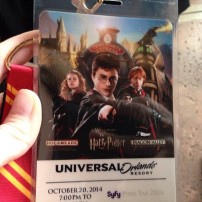 After we rode the main attraction ride of Diagon Alley, we stopped at a few of the food stations they had set up for us throughout the streets for dinner and drinks. The cast members that we had interviewed throughout the day were in our group as well – and having similar reactions to the magical world.

We did some shopping and grabbed some ice cream (the salted caramel blondie is definitely the way to go).

Midway through the night, we took the Hogswart Express back over to Hogsmeade in Islands of Adventure. The ride was different on the way back as we left from the London station – I actually liked the ride back a bit better. It seemed more magical to me. 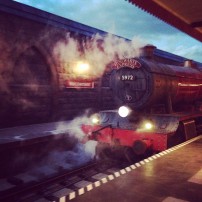 We had Hogsmeade all to ourselves, just as we had the last park – so we were able to hop right onto the rides – which was the first thing that ThreeIfBySpace’s Robert Prentice and I did. We booked it straight to Hogwarts (the castle) and rode the ride with Z Nation’s executive producer, Keith Allan. While, I had ridden the ride before (in 2010 and 2011 – also for Syfy’s Press Tour), there were a number of changes to the ride from what I had recalled. Changes or not, this ride is my favorite ride of anything I’ve ever been on. It’s just a truly magical experience.

After we hopped of the ride, we made our way to the Dueling Dragons to get our roller coaster on. We rode both of them in the front row like that bad asses we are… and because we needed to get all the rides out of the way before we had any butterbeer (which we grabbed as soon as we got off the coaster).

Butterbeer tastes pretty incredible, but it is incredibly sweet. The first few sips you can’t help but be floored by this amazing creation you’ve found. However, by the 7th or 8th sip you realize there is no way that you can finish it. Although kids probably won’t have a problem with it at all.

I had an absolute blast experiencing the parks with my friends and the Syfy crew. I’m incredibly grateful for the event, and I appreciate the work that it took to put the event together for us press. A huge, huge thanks to everyone involved!

Lastly, I have to say ThreeIfBySpace’s Robert Prentice is awesome – thank you for the ride to and from the airport Robert!!