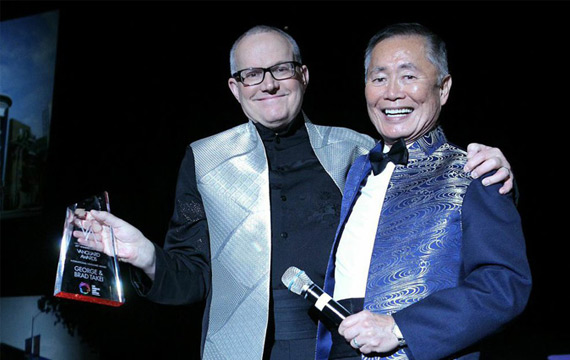 George Takei and bosses at Marvel Entertainment were honored for their advocacy for the Lesbian, Gay, Bisexual and Transgender (LGBT) community on Saturday night.

The Star Trek star and his husband Brad were given the International Vanguard Award from The Los Angeles LGBT Center at their 45th Anniversary Vanguard Awards in California.

The two have been staunch champions for equality, and while accepting the prize, Takei noted that his career as an actor has helped earn more visibility for the LGBT community in entertainment.

He said, “I started in the business back in the ’50s when LGBT people did not exist on television or in movies. Compare that to what we have today,” pointing out the increased number of TV series and movies based on LGBT people.

Marvel’s Vice President of Animation Development & Partnerships Courtney Lane was on hand to accept the Corporate Vanguard Award on behalf of the company, lauding his peers for “telling real stories about real people, and that includes portrays of LGBT characters.”

He added, “For me, as a gay man who grew up reading these comics, and being really encouraged and inspired by these characters, it’s pretty awesome.”

Check out some of the pics from the event below!

Showtime Renews 'The Affair' and 'Homeland'