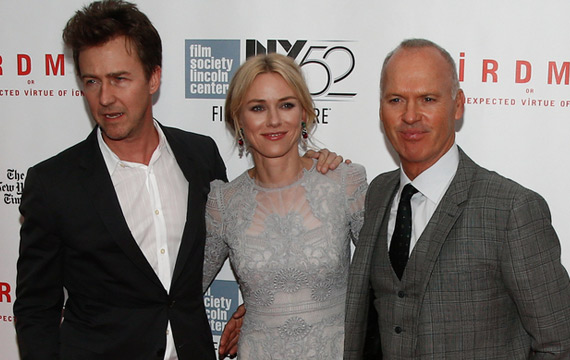 Birdman leads the nominations for the International Press Academy’s 2014 Satellite Awards after picking up 10 nods on Monday night.

The Imitation Game has scored eight nominations, including Best Motion Picture, Best Director (Morten Tyldum), Actor in a Motion Picture (Benedict Cumberbatch) and Actress in a Supporting Role (Keira Knightley), and Gone Girl and Boyhood have tied with seven nods.

There are also multiple nominations for Whiplash, The Theory of Everything and Into The Woods – the cast of the Rob Marshall movie musical will be honored with the Best Movie Ensemble prize when the awards are announced on February 15 in Los Angeles.

The Best Motion Picture nominees are Birdman, Boyhood, Gone Girl, Love is Strange, Mr. Turner, Selma, The Grand Budapest Hotel, The Imitation Game, The Theory of Everything and Whiplash.

In the TV categories, Fargo, Olive Kitteridge and The Knick lead the pack with four nominations apiece. The cast of The Knick will pick up the Best TV Ensemble trophy.

You can read the full list of nominees for the International Press Academy’s 2014 Satellite Awards here.