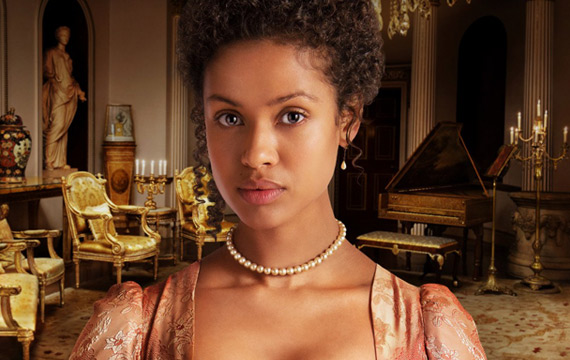 The film, about the illegitimate daughter of a Royal Navy Captain, has won nods in the Best Drama and Best Screenplay categories while Mbatha-Raw is up for Best Newcomer and Best Breakthrough Performance, her co-star Tom Felton for Best Actor and Amma Asante for Best Director.

Mbatha-Raw is also in the running for the Best Actress prize her drama Beyond the Lights.

Belle will compete against movies including The Fault in Our Stars, Pride and Mr. Turner in the Best Drama category, while Mbatha-Raw will battle it out with Shailene Woodley (The Fault in Our Stars), Jamie Foxx (Annie), Michael Fassbender (Frank) and Keira Knightley (The Imitation Game), among others, for the Best Breakthrough Performance prize.

Nominees for Best International Film include Boyhood, Gone Girl, Guardians of the Galaxy, Selma, Wild, The Imitation Game and The Theory of Everything.

Ben Affleck has landed a Best Actor nod for his role in Gone Girl, while other nominees include David Oyelowo (Selma), Benedict Cumberbatch (The Imitation Game), Jack O’Connell (’71) and Outkast’s Andre Benjamin for Jimi: All Is By My Side.

Shailene Woodley and Gugu Mbatha-Raw will go head-to-head once more for the Best Actress prize, alongside Quvenzhane Wallis (Annie), Imelda Stauton (Pride), Keira Knightley (The Imitation Game) and Thandie Newton (Half a Yellow Sun), among others.

Dame Judi Dench will receive the Lifetime Achievement Award in honr of her 50-year career on stage and screen.

The winners, as voted by the public, will be announced in London on March 31st.

Lena Dunham Cuts Back on Social Media Due to Cyberbullying